Artist and writer Samuel Brzeski visited Stavanger this fall as one of the 2022 CAS Residents in Art Writing. In the below text, Brzeski offers vignettes and observations from his time in the region. This text is closely related to his previously published text, "More sound than sense." 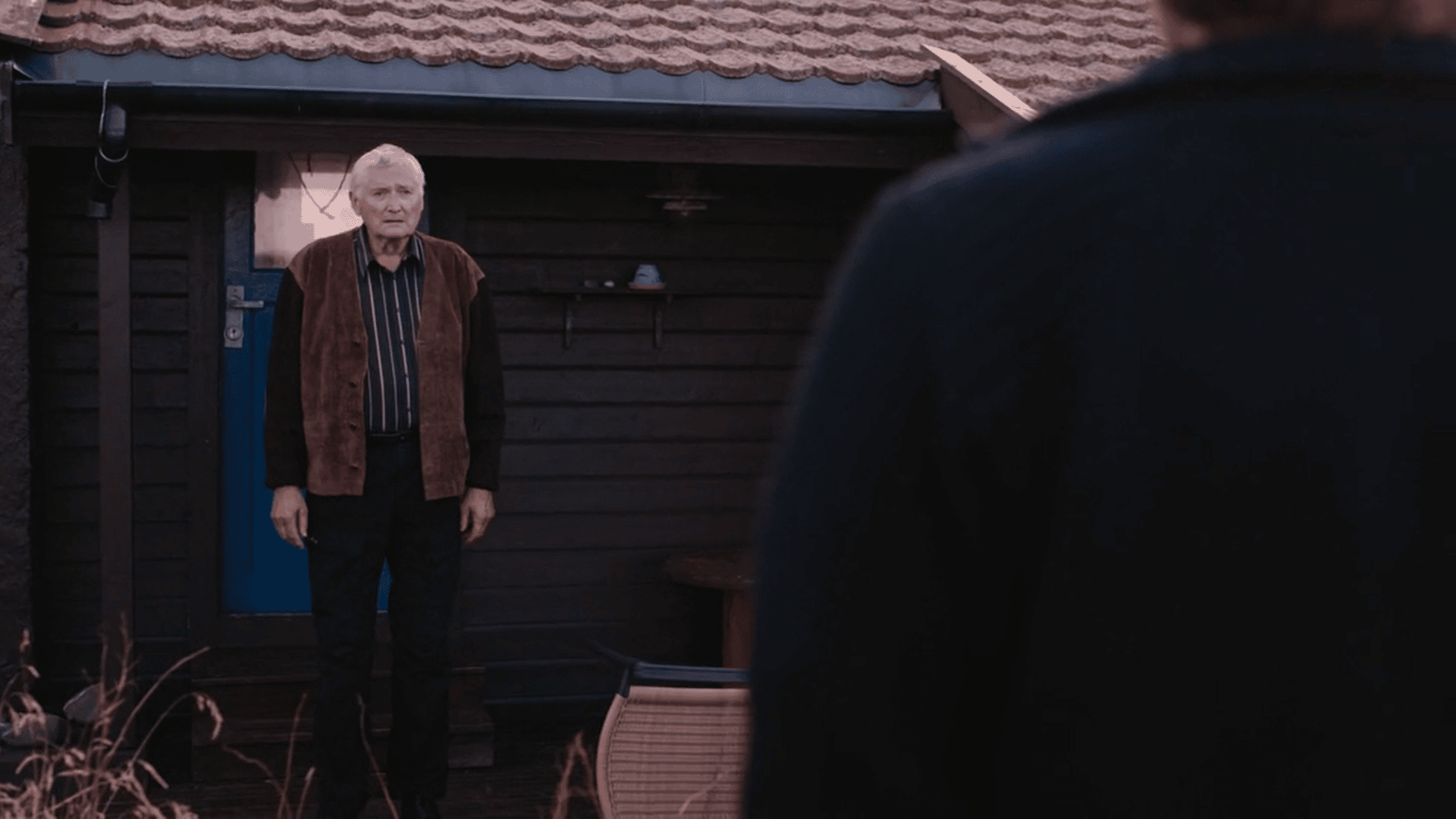 Two boys are half a boy, and three boys are no boy at all

The introductory short film to the Norwegian Oil Museum is told through the lens of a Father-Son relationship.

It is a familiar fable of the return of the prodigal son, the original sin being a disagreement between the men about Father’s career as oil engineer as opposed to Son’s growing environmentalism.

The conflict reaches its peak on Son’s eighteenth birthday, when Father buys for Son a gas guzzling Ford Mustang, probably quite a hard car to procure for Son in the Norway of the late 80s period in which the prequel is set. Son rejects the gift, and the pair subsequently drift apart and then do not speak over the intervening years.

This brings us up to speed to the present day in which the short film is set, where Father’s advancing age and the implied beckoning of death lead to Son’s renewed efforts to squash their beef after 20 years without speaking.

Kristoffer Joner, playing Son, presents a good representation of the awkward distance between two men attempting to resolve a relationship, but having none of the emotional faculties and complexities available to them in order to complete their task.

Son ends up reneging on his youthful environmentalist self, driving the old Ford Mustang up to Father’s cabin. The car is still in surprisingly good working order after 20 years in storage, showing none of the signs of aging that one would expect. Most of the film is concerned with this journey, during which Son reflects on the rise of oil in his lifetime; a dramatic device which allows the audience to learn of this history too, told through archive footage.

We are left at the end with the stoic reunion of the two men, starting with a stern stare down outside of Father’s cabin, before softening slightly in a conversation outdoors—the rugged landscape quite present in the wider shot—before the film comes to an end with an indication of a coming reconciliation.

We are deprived of a full emotional reunion, and the two are only able to discuss their relevant positioning through the lens of oil, which, although admittedly the overall aim of the film, gives a good articulation of the difficulties of male relationships and their blatant inability to tackle complex emotional difficulties head on, needing instead some type of subterfuge to work within.

I have become aware of the way in which I am deploying my voice in certain situations, a buzzing and focused projectile, slightly syrupy, and trained on one person at a time.

Between two stools one falls to the ground

On a visit to an institutional asylum from the early 1900s we find it completely boarded up due to a recent arson attempt. We discover instead a bus stop that has been transformed into an alfresco reading room, complete with Norwegian translations of the 50 Shades of Grey series, a book about the Beatles, the third of Knausgaard’s struggles, and eight or nine volumes of pulp fiction in various stages of decay.

Eating our lunch whilst sitting on two mildly mouldy recliners, we attempt to decipher the press release from an exhibition that we have both been invited to. The press release has been sent from an institution that seems strangely proud of the alienation that is procured following the obscurity of language deployed by their communications staff.

The bystander sees more than the player

I am asked how I feel about the execution of a Walrus in the Oslofjord region.

I change the subject, as I have no adequate response to the question.

Give a dog a bad name and hang him

In the 1900s pupils in Stavanger with unsatisfactory reading skills were grouped together and moved to a separate school.

This separate school was known as “skråpå”, a term which roughly translates as “the scrap heap”.

The nearer the bone, the sweeter the meat

Until the age of around nine, I had somewhat unsatisfactory reading skills.

I think that this had something to do with the subject matter of the reading material provided by the primary school I attended.

The books given to us to take home were all from the same series. The series had two characters who got into a variety of different situations befitting the depth of grammatical and lexical variation needed for the reading instruction of early learners.

The two characters were called Fat Sam and Slim Jim. I was an overweight child, so this was evidently going to be an issue for me. Add to this the fact that my best friend at the time was a spindly and cruel natured boy not called Jim, but Tom, whose one syllable similarity was rhythmically close enough for a bunch of seven-year-olds to assume parity.

Whilst the teasing of the other boys caused the reddening of my cheeks and the dying of my insides during any collective acts of reading in front of the whole class, Slim Tom’s campaign was all the more sinister and eventually unfolded across a number of years. He preferred the Trojan approach: one of subtly working his way underneath the nails before enacting his malice with a practiced agility, the depths of which I didn’t fully realise until quite some years later.

If you can’t ride two horses at once, you shouldn’t be in the circus

There is a man in a checked shirt in a supermarket car park braying and clamouring in the direction of an unsuspecting young woman. She stands next to a new model Tesla, jostling the keys in her hand and swaying from foot to foot.

He is bellowing out the benefits of owning an electric car.

He is listing all the relevant environmental and financial incentives.

He is asking the young woman questions and then immediately answering them himself.

The man’s wife is holding him tightly by the arm, trying to drag him in the opposite direction with an expression of embarrassed resignation on her face, whilst he strains and chomps at the bit.

You cannot shift an old tree without it dying

Many go out for wool and come home shorn

A three meter tall semi-naked woman is staring at me with unbroken eye contact as she slowly dances in the archaeological museum.

Projected onto the wall of the Bronze Age exhibit, her body is painted with red markings. She has a circular bronze belt plate hanging around her waist with a symbol of the sun etched into it.

The exhibition text tells me that the Bronze Age sun-etched belt plate was found in a nearby grave, alongside a few cave drawings that suggested a cult of sun worship.

There is a “no photos” sign next to the towering projection. A young boy standing to the side of me is surreptitiously filming the projection with his phone, half hiding behind a cabinet of ceremonial sacrificial daggers.

Another button is labelled “Bronze Age Woman performing Sun Salutations” and I press it.

A smaller version of same woman appears, this time less than a meter tall, projected onto the floor. The eye contact of the smaller woman is not held, as she is performing what looks a lot like downward facing dog yoga pose, leading into the upright pose with hands in the air that forms the sun salutation.

As she rises, the camera stays at waist level, focusing in on the sun etched belt plate. From the transitioning angle of her body moving from bending to standing, the belt plate is seen in profile. It becomes clear to the viewer that a long thin protuberance is emanating from the centre of the belt plate. The camera lingers for a considerable amount of time on a close-up of the plate, the protrusion pointing directly towards us.

At the back of the museum there is a section on various creation myths from different cultures and belief systems. An unexplained chorus of what appears to be wailing voices is playing from the roof of the installation. This primordial howl echoes through the rest of the museum, a collective groan of the early Gods as they are dragged awake across an infinite arctic tundra, wind whipping across the frost, imprisoned within a Bose speaker.

Give a thing and take a thing, to wear the Devil’s gold ring

The reddening sunrise drenches the apartment in crimson for ten minutes every morning. It has become simultaneously nostalgic and untenable. I must never come back here and stay here forever.

There is a special entrance to the cruise ships for those passengers who have decided to traverse the city by bike.

The foot passengers trickle in and out through an unassuming side entrance that is altogether underwhelming when considering the grandiosity of the ship.

The cyclists trundle past this entrance ringing their bells.

It has been my experience that cruise ship cyclists are always and persistently ringing their bells.

Some of the more confident male cyclists half dismount whilst gliding past, leaving one foot on a pedal whilst deftly swinging the other leg over the bike with the toe-pointed grace of a ballerina – a sort of riding side saddle – before casually sticking a dismount and seamlessly transitioning to walking speed, wheeling the bike by hand to its destination.

The men look around as they do this, proud of the smooth movement in which they risk it all in order to orchestrate the most efficient use of their ride time, reducing the wasted seconds that would be required to stop moving entirely in order to dismount safely.

I am sure that these masters of the cruise ship hire bicycles are imagining the less confident riders jealously watching them as they expertly demonstrate their skill, longing to share their mastery over the art of the smooth dismount.

It is a shame that this mastery is not transferred to the cyclists as they navigate their way throughout the traffic systems of the cities in which they are riding. They seem to disregard any signage or rules of the road, as if their status as cruise ship bicycle riders allows for some form of diplomatic immunity from common sense practices such as not repeatedly driving your fucking bike into the back of my legs.

The passengers are commonly seen cycling around in a jostling pack; the expert male riders located at the front, rear and sides of the mass in order to protect the weaker ones. Around the experts’ necks and waists hang utility belts of maps and whistles, passports and cameras, cagoules and first aid kits, lanyards and tourist passes for the whole family.

All of the dismount confidence evaporates when a red stop sign threatens to split the group in half. Petrified of isolation, the expert riders are willing to skip red lights, cycle over parents and pushchairs, and deny the existence of oncoming traffic so as not to be disconnected from the herd. Approaching an amber light, the men will shout and bellow in fear, raising their buttocks up from the padded bicycle seats as they shift their bodies into racer mode, changing gears loudly to find the right speed in order to best protect themselves and the rest of their kin.

These moments of frantic insecurity are later forgotten when it comes to the dismount. If you are lucky, you will see a series of confident men dismounting one after the other in regular rhythmicity, their pointed ballerina toes acting out a kind of mounted form of synchronised swimming – a dance of the flamingos giving their final salute to the shore.

Samuel is based in Bergen, Norway.