Bergen-based artist and writer Samuel Brzeski will be coming to Stavanger in September as the first 2022 CAS Resident in Art Writing. Brzeski's work blurs the boundaries between writing and art, and critiques the structures of language and modern means of information transmission. Below, Brzeski describes his early interest in language, his working process, and the urgency and energy of small presses. 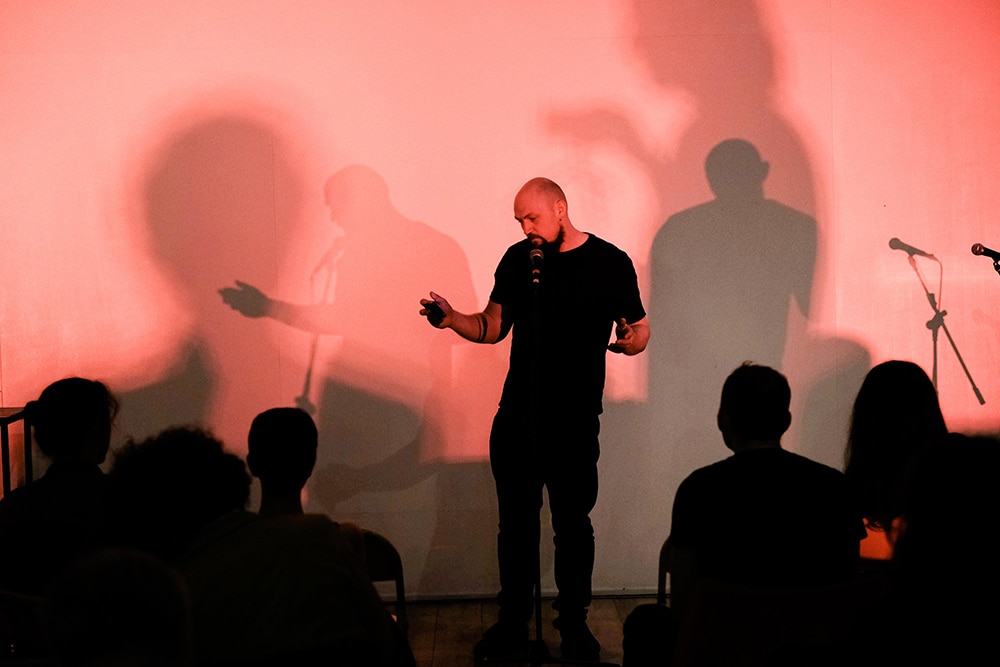 Heather Jones: You’re described as an artist and writer, but these two often-distinct disciplines are inseparable in your work. I know you have a background in English literature, but how did you first come to work with visual arts (defined broadly) and what was your path to your practice as it is now?

Samuel Brzeski: I sometimes like to say that I went to writing school in order to decide that I wanted to be a visual artist, and I pursued an MA in art to decide that I wanted to be a writer. For a while I worried a lot about where I should ‘belong’, to which audiences I should be adapting my work, what I needed to know, to do, to learn, how I should be presenting myself. A couple of years ago I just stopped worrying about all of that, and embraced the liminal position of being somewhere in between the fields of literature and contemporary art. I am an artist who works with language in various manifestations, but language itself is the raw material from which I work. Sometimes this is seen in fast paced texts set to extreme music, other times multichannel vocal compositions, in fragmentary warping kinetic text videos, in vocal performances and then, for platforms such as CAS, hybrid written texts on screen or on the page.

HJ: To what do you credit your initial and ongoing interest in language?

SB: An absolute obsession with books and reading, ever since I was a young. In the list keeping and the copying out of passages and the re-reading and the reading out loud and the repetitions. Books as a way to navigate a life, I think, is where the original credit must lie.

HJ: You work with language and all of the media used to transmit language including text, sound, video, performance, and publication. Can you describe your working process? How does an artwork begin, and how do you decide what format or media to work in at a given time?

SB: I guess I can be quite strict about what type of content belongs where. Whether a text or composition should be for the voice, for the video, for the screen, for the page, or a combination of various different mediums is something that is considered at the inception of a work. Working within the processes of information transfer, the medium is everything; carrying so much weight within the processes of cognition.

I strive for the form to critique itself. For example, the work Mortal Combat comments on speedreading platforms and the digitising and acceleration of acts of reading. The work is composed of 24 Amazon Kindle Fire eReaders arranged in a panopticon surrounding the viewer. Each kindle channels the application Spreeder and plays texts from a list of the ‘100 Books to Read Before you Die’ at the absurdly fast speed of 5000 words per minute. The eReaders are placed in portrait orientation around the viewer, reminiscent of the phones and Kindles and tablets that act as the contemporary subject’s portal to an almost infinite pool of language.

As far as beginnings, a work can start when I have read a particular text, found a new type of language-based application or technology, or discovered a new form of reading or voicing technique that piques my interest. Recently I have been using speech errors as starting points for works, such as Blake fruid and Glear plue sky, mispronunciations of ‘brake fluid’ and ‘clear blue sky’, which were the titles of two recent works.

HJ: You’re originally from the UK, but are now based in Norway. Has living in a foreign country surrounded by a foreign language influenced your work?

SB: Funnily enough, being surrounded in a foreign language has allowed me to become more fully immersed in the English language as a medium to work with. I sometimes like to think that my studio is an isolated little test laboratory for language, tucked away in Norway. Saying that, the level of English comprehension in Norway is particularly good, so my skills in Norwegian usually depart relatively early on in the conversation.

What I am interested in within the Norwegian language is the politics of the dialect; the pride and hierarchies that are associated with different intonations of speech. The regional dialects of Norway can sound like entirely different languages, and sometimes really jar with one another. For example, the light musicality of some of the inland dialects, when placed beside the guttural rawness of the Bergen port city speech, is an interesting juxtaposition. 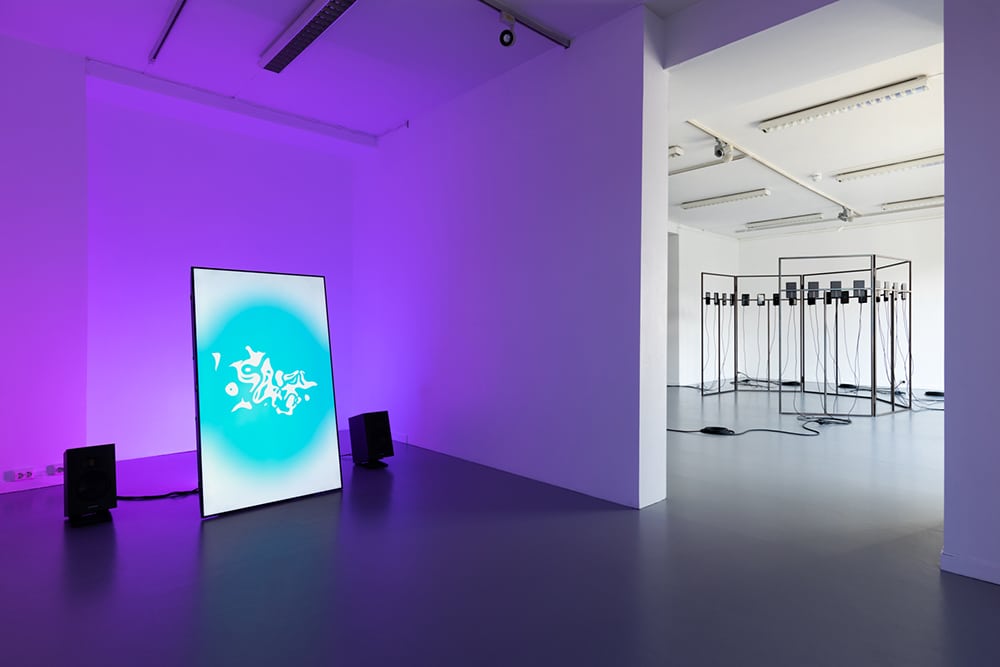 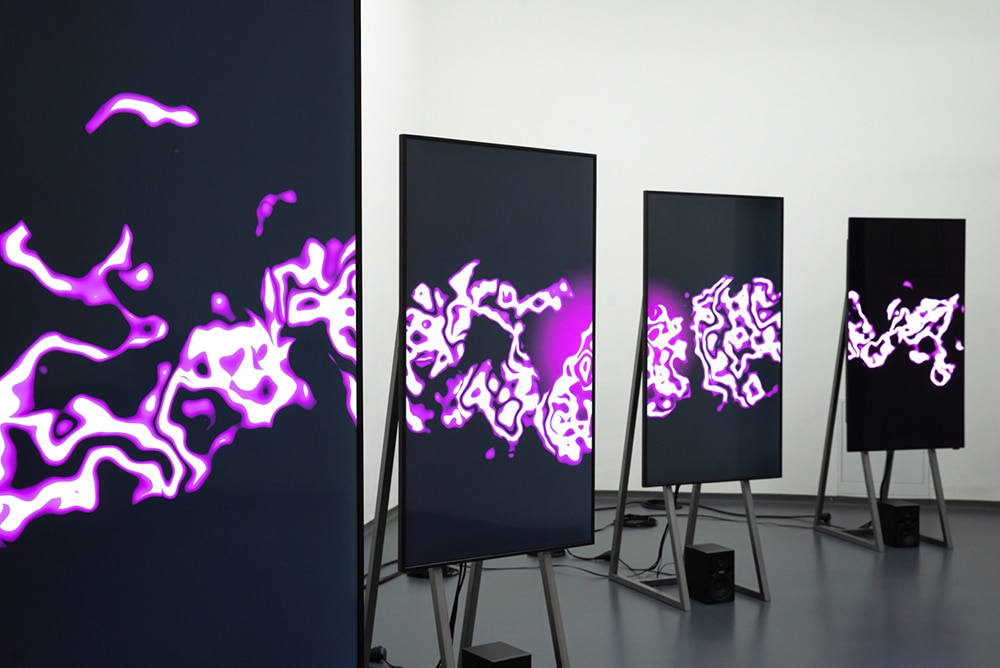 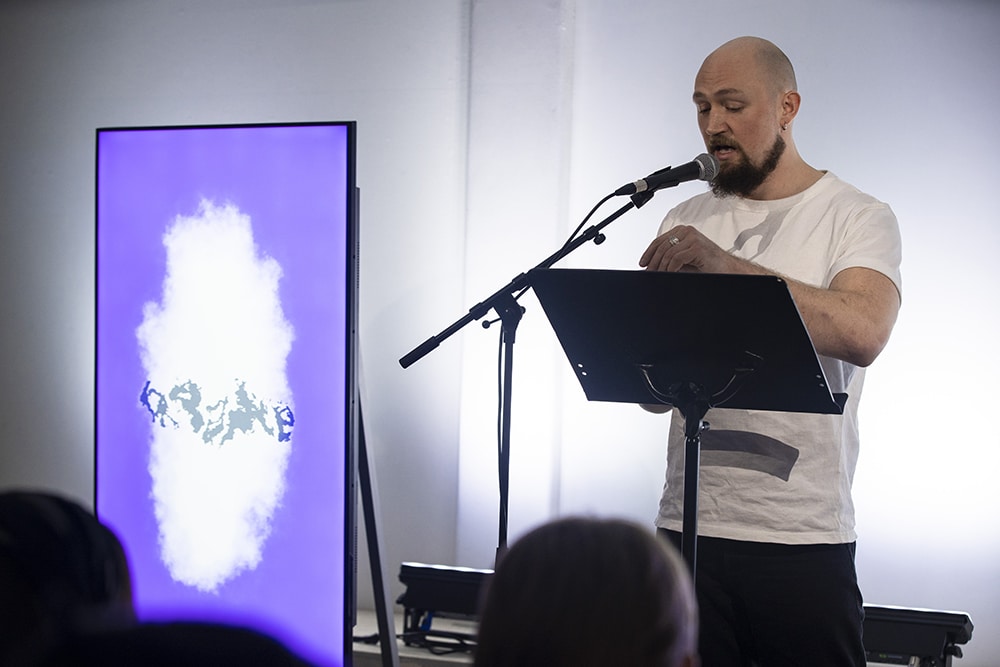 HJ: The first time I encountered your work in person I wrote, “feels like a gut punch and a wink at the same time.” And in a recent article for Kunstkritikk, Tommy Olsson referred to your work as “text that constantly attacks itself.” All of this to say, it seems that you simultaneously create with words while deconstructing the concept of language as an infallible means of communication. Do you consider yourself a critic of language itself, or of the means through which it is conveyed (or neither)?

SB: In a series of conversations with Austrian writer Alexander Woran, he described my working methodology as a separation of the vehicles of language (text, voice, channels of information) from the content (semantic value) where various transmogrifications take place before vehicle and content re-join one another. However, when they rejoin, they have each changed state, forming some sort of a new composition of feeling / meaning. I liked this description from Alexander, a kind of a journey of deconstruction and then reconstruction.

Certainly though, my work does critique the various structures of language and information transfer that permeate post-digital culture. More than language itself, it is rather the excess of language, the swirl of it that surrounds us, and the vocalisations and polemics of digital culture that are voiced through these networks that I examine and critique. Media theorist Franco Berardi’s writings on semiocapitalism and linguistic excess have been an important influence on my work here especially.

On top of this, recently I have been taking an active stance in the critique of neoliberal productivity drives as seen throughout various self-help narratives and online hustle cultures, and their relation to deteriorating mental and emotional health.

HJ: In addition to your individual work, you co-run an art-writing collective and publishing platform called TEXST, based in Bergen. Can you tell us more about TEXST, and what you see as the role of small presses in the creative community?

SB: TEXST started off as a group of MA students that got together every two weeks to critique each other’s text works. A group of six of us established it in response to a lack of text tuition in the first year of our MA. Since then, TEXST has grown and gone through various different cycles, including running several residential writing retreats, delivering a series of expanded reading workshops as part of the 2019 Bergen Assembly, and is now established as a small publishing press. We started off by publishing solo and collaborative text projects from the members of the collective, but have recently started inviting others to publish with us, including the English poet Sam Riviere who recently released a pamphlet of AI written poems with us. TEXST is for those projects that exist in between mediums: the hybrid texts, the poster projects, forays into conceptual writing and experimental publications. We operate on a low budget with a focus on getting projects out there into people’s hands.

Small presses are important to me because of the immediacy of the publication process. With bigger publication platforms, there are a lot more stages that a project needs to go through before reaching the publication stage, which can sometimes formalize ideas and lose a sense of urgency and raw energy. Having attended several art book fairs across the world, what I appreciate most in the vast volume of ephemera that I have collected from various small presses is this sense of energy that can be found. For example, the massive zine tent at the colossal New York Art Book Fair is a sweaty meat market of pastel riso projects blooming in various shades of the colour spectrum from trestle table to trestle table. It is an absolute treasure chest in there.

HJ: Unlike many previous CAS residents, you’ve been to Stavanger before and are familiar with the area. Is there anything specific you’re hoping to explore or planning to work on during your time here?

SB: I am actually looking forward to getting to Stavanger with no pre-conceived ideas of what my outputs will be. Already the subject matter of my texts will be somewhat framed by my practice as a whole, but I am going to allow space for the New to come in, and enjoy the journey. I also just ordered a book of short texts by Alexander Kielland to read whilst I am there, as he was born in Stavanger.

HJ: Do you have any current research or upcoming projects that you can share with us?

SB: At the moment I am working on two ongoing longer research projects. The first, Vibrational Semantics, explores the relation between feeling and meaning in the semantics of the voice. Through relentless repetitions and deconstructions of the voice, the project seeks a new level of vibrational meaning, of rhythmic feeling, that can come forth after emancipation from semantic codes. Practically this is done through multi-channel vocal compilations and performances, oscillating between signification and sonority, between speech, sound, and noise, coupled with kinetic textual animations that act as support structures around the voice.

An exhibition from the project will take place at Lydgalleriet in Bergen in Spring 2023, a gallery that I have worked with in various different capacities over the past few years. This will be somewhat of a sequel to a show that I had at bb15 Space for Contemporary Art in Linz in June. As part of the project I have curated a series of commissioned texts that will be launched alongside the exhibition at Lydgalleriet, including texts by some of my favourite practitioners in the field: Daniela Cascella, Marie Thams, Lisa Busby, Holly Pester, and Cia Rinne.

Secondly, the project Assisted Rewrites presents machine-assisted rewrites of classic poetry and literature as digital, performative, theatrical artworks. In this project, various technological interfaces are ‘hacked’ in order produce innovative and challenging explorations of what a digitised future of reading and literature could be, executed in collaboration with the machine. This includes projects like Mortal Combat that I discussed earlier which uses the speedreading application Spreeder, as well as works that utilise the geolocation application what3words to rewrite classical landscape poems. I will have an exhibition of works from this project at Bærum Kunsthall opening in February next year. It will be my first solo show in eastern Norway, so I am looking forward to it.

Samuel Brzeski is an artist and writer based in Bergen, Norway. Samuel’s current work searches for the place and presence of the emotive body within the post-digital swirl of language. This involves exploring the inherent malleability of the structures of language through contradiction and disruption, alongside investigations into platforms of digital information transfer. Repetition, dalliance, deconstruction and humour are used purposefully, yet playfully; walking a thin line between tragedy and comedy, between sense and nonsense, between signification and sonority. Working primarily with acts of reading and vocal semantics, projects investigate how the emotional impacts of digital culture are manifested through text- and voice- based mediums, including video, sound, performance and publication.