No sitting on the sidelines

No sitting on the sidelines

On November 9, Bergen Centre for Electronic Art (BEK) opened the second iteration of its annual symposium The Only Lasting Truth is Change. BEK describes the conference as "an expanded symposium investigating future configurations of art, technology, nature and power." Below, artist and writer Samuel Brzeski reviews the three-day event and offers his reflections on specific artists, speakers and performances.

OK so full disclosure here, I participated in the symposium last year as an artist, so I can’t say that my position here is entirely objective. But then again, can any artist truly occupy an objective role in expressing their thoughts on any cultural activity in an artistic community as close-knit as Norway’s? Maybe not.

The newest iteration of Bergen Centre for Electronic Art‘s symposium, titled The Only Lasting Truth is Change, did a good job of getting away from the sometimes too inward-looking and self-referential landscape of Norwegian art. A mix of lectures, performances, presentations of creative projects, and things that lie somewhere in between, the symposium takes its name from a passage from Octavia E. Butler’s novel Parable of the Sower. The quote goes on to say that “all that you touch you change”, where echoes of the Midas touch hint at questions of causality and responsibility when faced with various ongoing accelerations and interrelated global circumstances.

The symposium attempts a lot with its curatorial statement. It is a familiar rhetoric of art’s ability, position, or potential to effect change in a world that is increasingly out of our control. The general themes of this year were anarchism, traces and mountains, as seen throughout art, technology, nature and power. More lists ensue in the statement, but we get the picture: various crises and the potential for a creative response.

The main program started with a lecture from philosopher Catherine Malabou detailing the two different modes of anarchism. Framing the symposium, Malabou quite succinctly explained how the more traditional form of revolutionary anarchism has been somewhat infected and diluted by the tech-bro anarcho-capitalism of Elon Musk et al. Malabou’s position is interesting in that, rather than describing the helplessness of a condition, she offered a three-point plan in which trad anarchists can overcome, differentiate and redefine their position and motives. This opening gambit presented a good start: setting the scene for problem solving rather than just an expression of a condition.

That hopeful potential was somewhat diluted in a proceeding evening of increasingly dense rhetoric. It asks a lot of an audience on a Friday night to sit through multiple lectures on intellectually challenging subject matter, some of which required significant pre-existing knowledge. Add to this the fact that the Zoom lecture format that some of the talks took is ever more alienating. As the titles of the lectures became more abstract and some of the speakers begun to ramble, I drifted. The subject matter of each talk was important, but experienced in such close proximity to one another late into the evening, they were hard to digest. 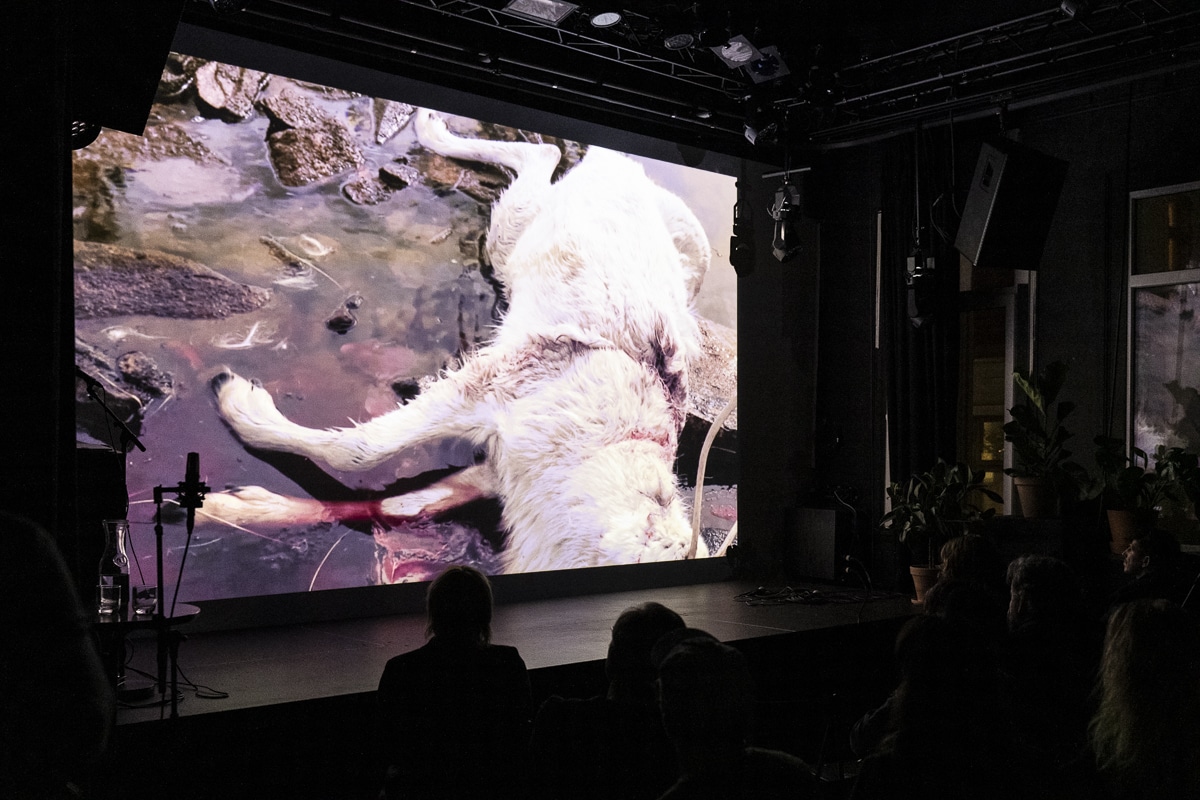 For those that stuck it out to the end, we were rewarded with a selection of film works from Sami artist Matt Aikio. Aikio presented what on the surface seemed to be a fairly basic concept—differing approaches to nature—but framed through hegemonic power structures regarding indigenous reindeer herders’ rights to kill predators that prey on their herds. The Norwegian national authorities’ approach to nature conservation does not consider the practical needs of those living in the areas concerned, and the herders are severely punished if they kill the predators that are slowly decimating their livelihoods. The position of impotence that the herders hold is clearly frustrating, felt through the wavering intonation of the voice-over. A resounding image of the stalking of large herds by small groups of empowered predators acted as a metaphor for the overall theme of the evening—how existing power structures allow for the vulnerable many to be controlled by the vicious few.

The rest of the weekend held more of a common ground between theory and practice. One of the main highlights was Susan Schuppli’s presentation of different ways that her artistic practice conceives of states of cold. Sometimes, I just really enjoy an eloquent individual using precise yet accessible language to talk about a subject that they are wholly invested in and have a comprehensive knowledge of. And Schuppli really knows her shit. More than this, her work around how temperature is used as a weapon against indigenous and precarious peoples worldwide is everything that a lot of projects aspire to be: relevant, important, fully researched and well executed. Her work as part of art world supergroup Forensic Architecture continues to be some of the most important work being made at the moment—acting as a true example of the successes of interdisciplinary collaborative practice.

A lively performance program provided a much-needed relief to the more conceptually dense and academically bloated areas. Rian Treanor’s multiplayer drum machine developed for and with neurodivergent individuals presented rhythm as a unifying property. Performed live alongside workshop participants, the beats oscillated beautifully between chaos and order, blasting the audience at top volume. These rhythms continued throughout the other performances of the night. Projections of a deconstructed Ukrainian flag morphed behind Zavoloka’s hypnotic live set of post-rave euphoric techno, whilst South African three piece Phelimuncasi breathed life into the crowd with their rhythmic Gqom vocals. In these moments I was able to get out of my head and into my body; in a state of feeling that balanced out the headiness of the day.

Despite its aims and content being ambitiously large and at times convoluted, the symposium absolutely widened my conception of what anarchism actually is. Or could be. In a program that took into account the politics of language in the Barents, the precarious state of immigrant berry pickers in rural Scotland, industrial waste from semiconductor production in China, and UN structures of control in Western Sahara, a global diversity of voices and positions were platformed and amplified. Within these examples, despair was eschewed in favour of potential modes of collective action. I am quite tired of art world conferences and meetings and symposiums and workshops that only present problems without any intimation toward creative solutions—a kind of glorification of despair porn that I find unhelpful—so this proactive approach was refreshing and believable.

However, not all of the projects depicted held true to the symposium’s purported aims. Eduardo William’s psychogeographic films were ostensibly about nothing in particular and appeared purposefully aimless. The camera’s wandering gaze of the dilettante traveller left a lot to the subjective interpretation of the viewer, so much so that any type of positioning or intention of the artist was wholly unclear. In a short artist talk after a screening, Williams seemed to confirm this lack of intention. Or rather, he stated that the intention is as unknown to him as to the audience. This apathetic positioning worked directly against the active political figure of the anarchist that the rest of the program was seeking to build, leading to questions around the work’s relevance.

Although attempting to engage with everything the symposium had to say was exhausting, the situations articulated are quite exhausting. Bureaucratic and powerful nations and systems continue to crush the weak and underrepresented, continue to divide and conquer. In my position as a white guy coming from one rich nation with a dirty past living in another rich nation with an oily present, my part in these systems is active and applicable, whether I want it to be or not.

This brings me back to the notion of objectivity, or rather its impossibility. If a lot of us are bound up in these systems and processes, then our everyday choices as politically active bodies, as consumers, as beings, absolutely matter. It is impossible to be apolitical, to decide not to participate, because any vote for nothing is a vote for the continuation of the status quo. Although things seem to be moving and changing at incredible and ever-accelerating speeds, The Only Lasting Truth is Change asks us: What are we going to do about that change? How are we going to choose to experience it? And who are we going to share it with?

Samuel is based in Bergen, Norway.