CAS editor Heather Jones reviews Submerged Motherlands, a new installation by the artist Swoon currently on view at the Brooklyn Museum in New York. Swoon joined fellow urban artists in coming to Stavanger to participate in Nuart in 2008. 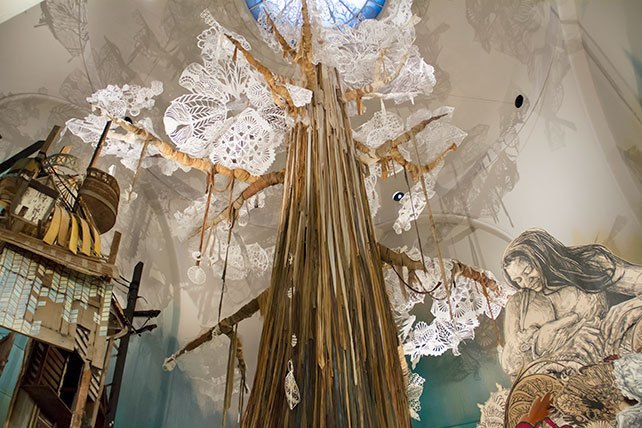 These are a few of the words used to describe Submerged Motherlands, the newest installation by artist Caledonia Curry, aka. Swoon, currently on view at the Brooklyn Museum in New York. The elevator rises to the museum’s 5th floor, metal doors open, and you enter a mythical landscape bathed in soft, warm light. Larger-than-life heroic figures, block prints rendered in Swoon’s signature inky, fluid lines, stand around the perimeter of the room, both welcoming and guarding in turn. Within these images, emotive portrayals of the life cycle of the artist’s recently deceased mother, a close friend breastfeeding a new baby, intermingle with depictions of mythical characters, an enormous drawing of the primordial sea goddess Thalassa, previously on view at the New Orleans Museum of Art in 2011. All are personal. All are present. Enveloped in one of these portraits and off to one side sits a small, beehive shaped structure, complete with benches, actively encouraging rest and introspection.

Dominating the space is a colossal handmade tree, rising to nearly brush the top of the room’s 72 foot high rotunda, drawing your eyes immediately upwards in a cathedral-like trance. Branches stretch out towards the walls of the cupola, draped with delicate, ferny, cut paper in the shapes of leaves, fish scales, and fluid swirls. A wavering flood line exists uninterrupted halfway up the walls of the single, towering room in a dripping blue (applied with fire extinguishers), hinting that we may be underwater but breathing freely in a makeshift Atlantis; a secret world.

Around the base of the tree are docked two sculptural rafts, both beautiful and fully functional. The lacy sails and whimsical designs of the boats are complimented by the practical presence of tin cups, tools, and other necessary supplies. Ropes (lines) lay spooled and ready for use, motors sit poised as if waiting for the current, yet still there is a feeling of peace, of rest, that allows you to imagine that you are being granted a momentary glimpse into a world fully real but often hidden from view.

This is not the rafts’ first life, and they have been on a truly Homeric journey to arrive back at their resting place at the Brooklyn Museum. In 2006, Swoon joined hands with a slew of friends and collaborators to build The Miss Rockaway Armada, a collection of rafts hand-made from the detritus of New York City (and a few other urban environments). The Armada was both a collection of people and an idea; a challenge to see if they could strike out and create a truly alternative way of living and traveling in the United States. The boats set sail in Minneapolis and drifted down the Mississippi throughout the summers of 2006 and 2007, crewed by an ever-rotating assortment of artists, musicians, designers and craftspeople.

In 2008, a new iteration of the project took form as The Swimming Cities of Switchback Sea a flotilla of rafts that sailed down the Hudson River, performing at river towns along the way. The Swimming Cities, beginning in Troy and finally docking in New York City, culminated in an immersive exhibition at Deitch Projects in Long Island City. The boats were revamped again in 2009 and, with the title The Swimming Cities of Serenissima (a former name for the Republic of Venice), traversed the Adriatic Sea to arrive uninvited at the 2009 Venice Biennale. The boats have remained in Italy, disassembled and stored in containers, until Brooklyn Museum curator Sharon Matt Atkins invited Swoon to create a site-specific installation for the museum.

Although true to her individual vision, Swoon’s artistic practice is consistently rooted in collaboration and community. (Other collaborative projects include Transformazium, Braddock Tiles, and Konbit Shelter.) At any given time, approximately 30 people lived, worked, played, and slept on the rafts, and many members of this community were involved in the return and reassembly of the boats at the museum, as well as in the creation of the installation as a whole. The bark of the tree was formed from reclaimed fabric, painstakingly hand-dyed by an army of studio members, and in order to fully take advantage of the museum’s height, the artist collaborated with an engineer to suspend the sculpture from the ceiling of the domed rotunda. For three weeks leading up to the opening, Swoon worked with a dedicated crew to unload, detangle, and reassemble the rafts; to print, cut and paint all included artwork; and finally, to carefully install everything to create a cohesive whole. She also invited friends and collaborators to enliven the space with concerts, discussions, and film screenings with live scores throughout the exhibition.

Submerged Motherlands represents not only a homecoming for the rafts, but also for the artist herself. Although raised in Florida, Swoon has called Brooklyn home for well over a decade. She has created large-scale solo exhibitions and projects the world over, but the enormity of this exhibition at the Brooklyn Museum can only be seen as a recognition of the artist as one of their own community. Overall, the exhibition strikes me as the culmination of a Oddysean search for home; at last a return to something half-remembered and long searched-for.

Though the mythic, fantasy-like quality of the exhibition is undeniable, Submerged Motherlands also grounds itself in some of the hugely pressing issues of our time. Environmental destruction, species endangerment, climate change and subsequent rising sea levels are alluded to. The flood line is an ominous reference to the destruction caused by Hurricane Sandy in 2012. The beehive-like gazebo, covered in hexagonal cardboard cutouts, gestures towards the fears around bee colony collapse. The installation as a whole avoids wholly literal references and didactic instructions, and instead touches on the less accessible emotions tied up in our current environmental struggles.

The message here, however, is not surrender or denial but hope. There is a delicate balance between reality and metaphor, weaving together paradoxical feelings of displacement and belonging, looming threats of destruction and quiet contemplation. The installation provides us with a brief respite in the midst of overwhelming challenges, but Swoon is not suggesting that we should live in an imaginary world with our heads in the sand. Rather Submerged Motherlands pushes us to recognize what is beautiful, as well as to imagine a reality that could be, and then to step back out into the world with a renewed energy to create, act, and restore.

Swoon, born Caledonia Dance Curry, studied at the Pratt Institute, Brooklyn, before bringing her art to the streets in 1999, wheat pasting her large linoleum- and woodcuts on the sides of the industrial buildings of Brooklyn and Manhattan. She has also become active in humanitarian projects: Konbit Shelter Project helps Haitians who lost their homes in the 2010 earthquake to create sustainable buildings; and the Transformazium project in Braddock, Pennsylvania, works with local residents towards creative revitalization of their community. Her art is in the collections of the Brooklyn Museum, the Museum of Modern Art, and the Tate Modern, London, among others. It has also featured in exhibitions at the Yerba Buena Center for the Arts (2008), the Museum of Contemporary Art Los Angeles (2011), the New Orleans Museum of Art (2011), and the Institute of Contemporary Art in Boston (2012). 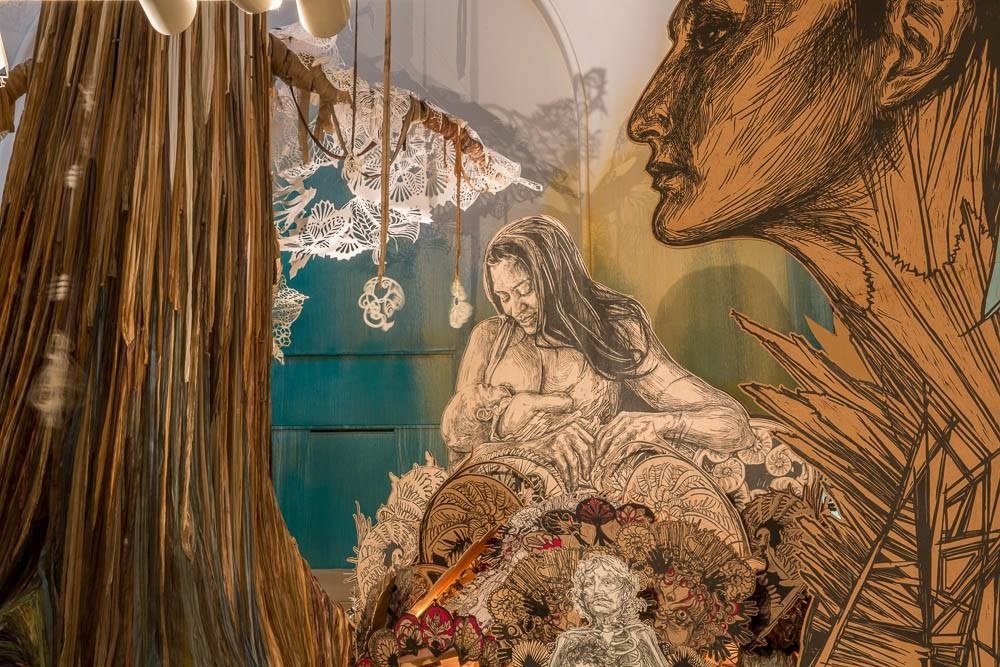 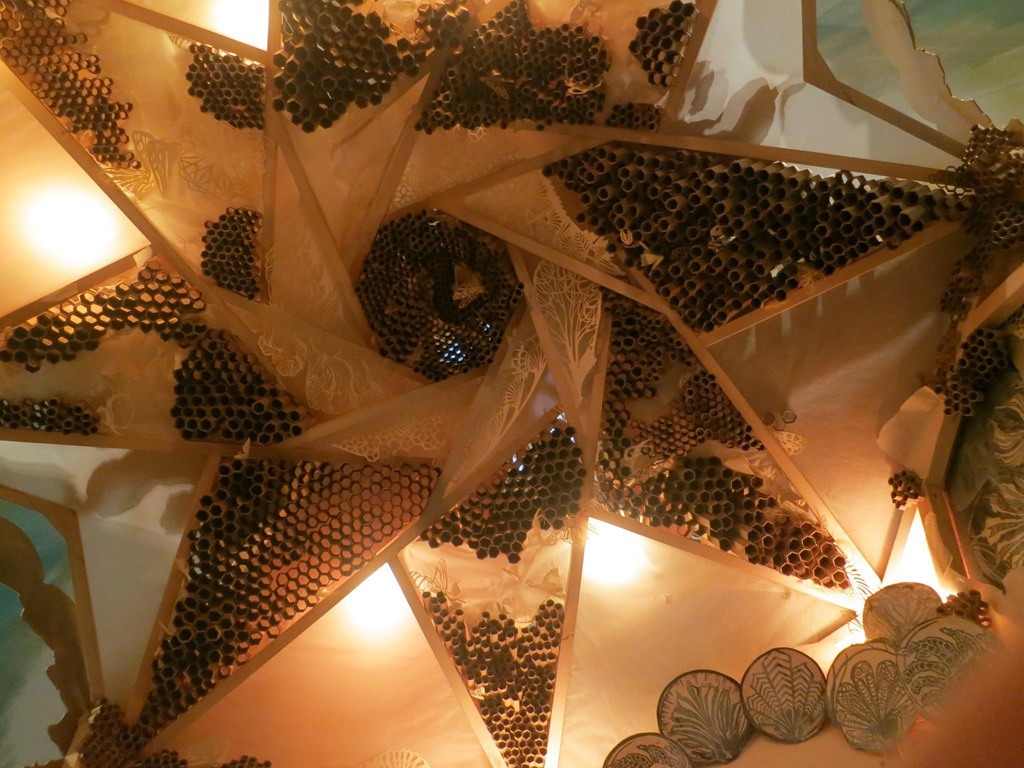 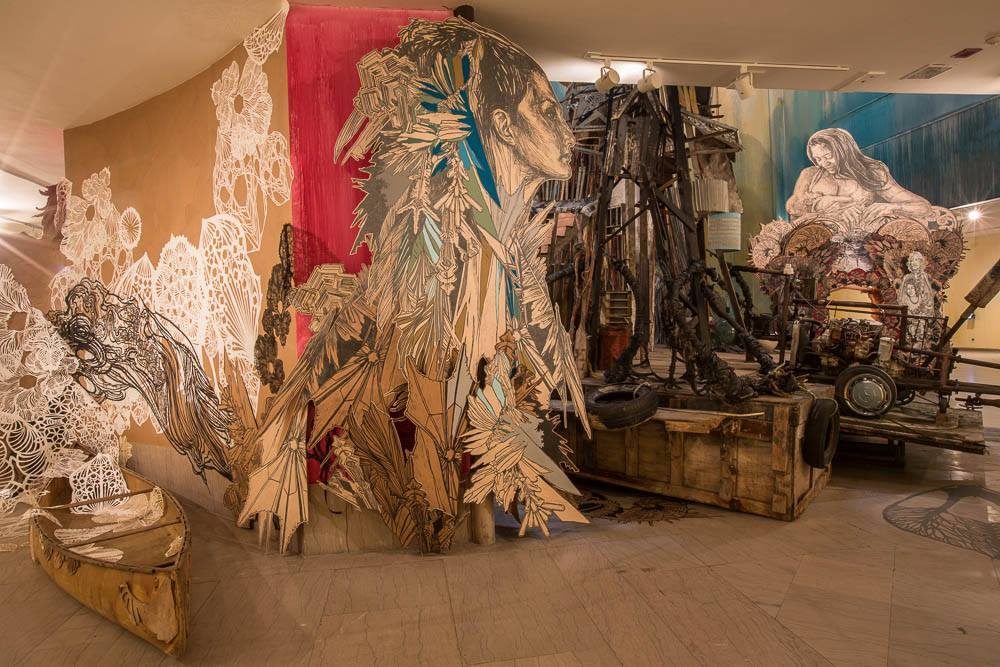 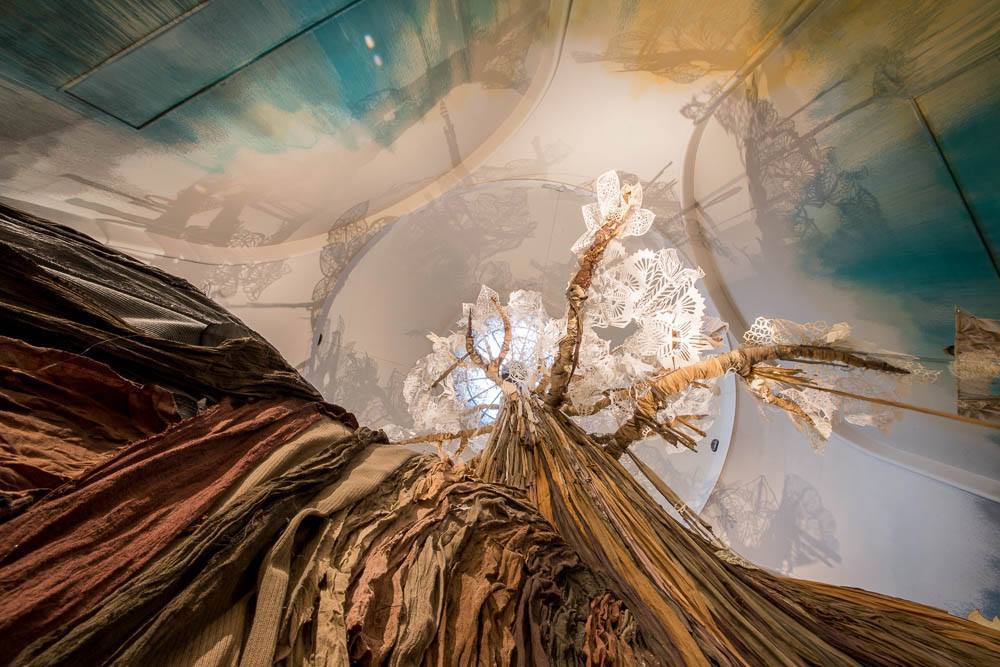 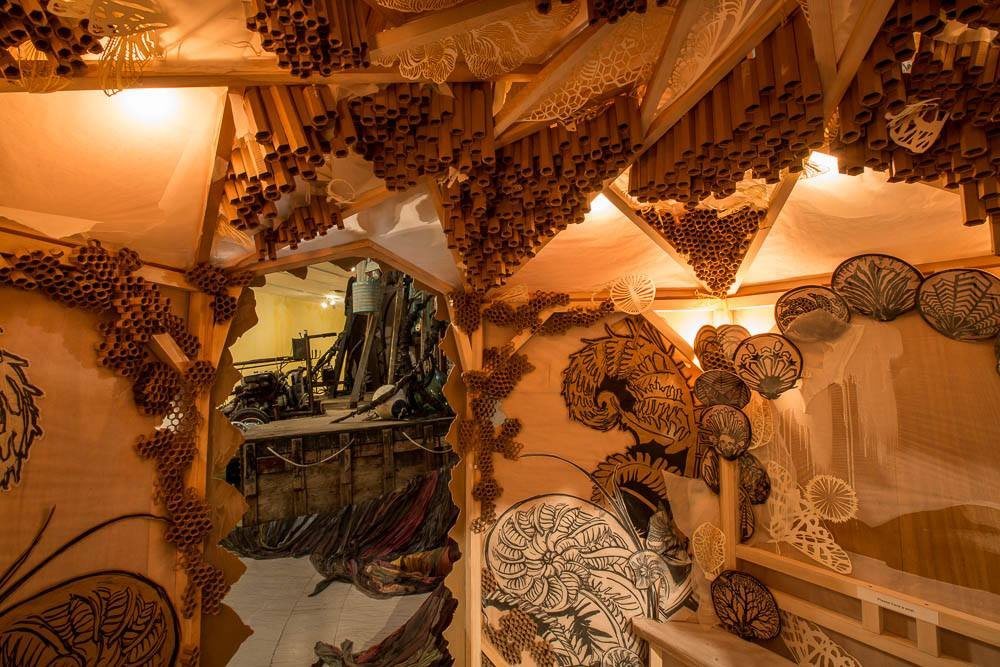 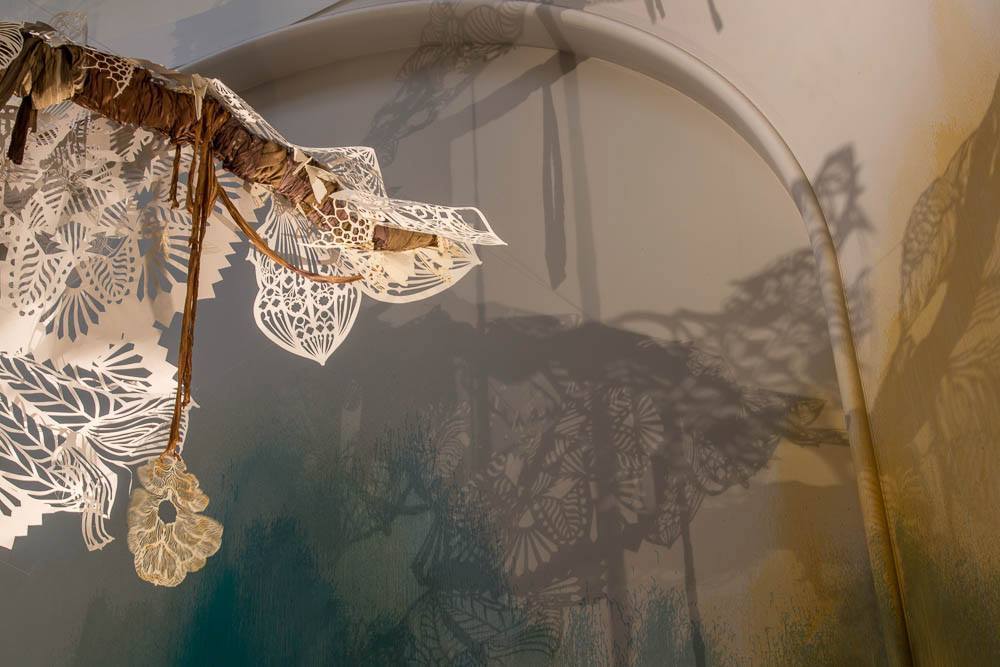 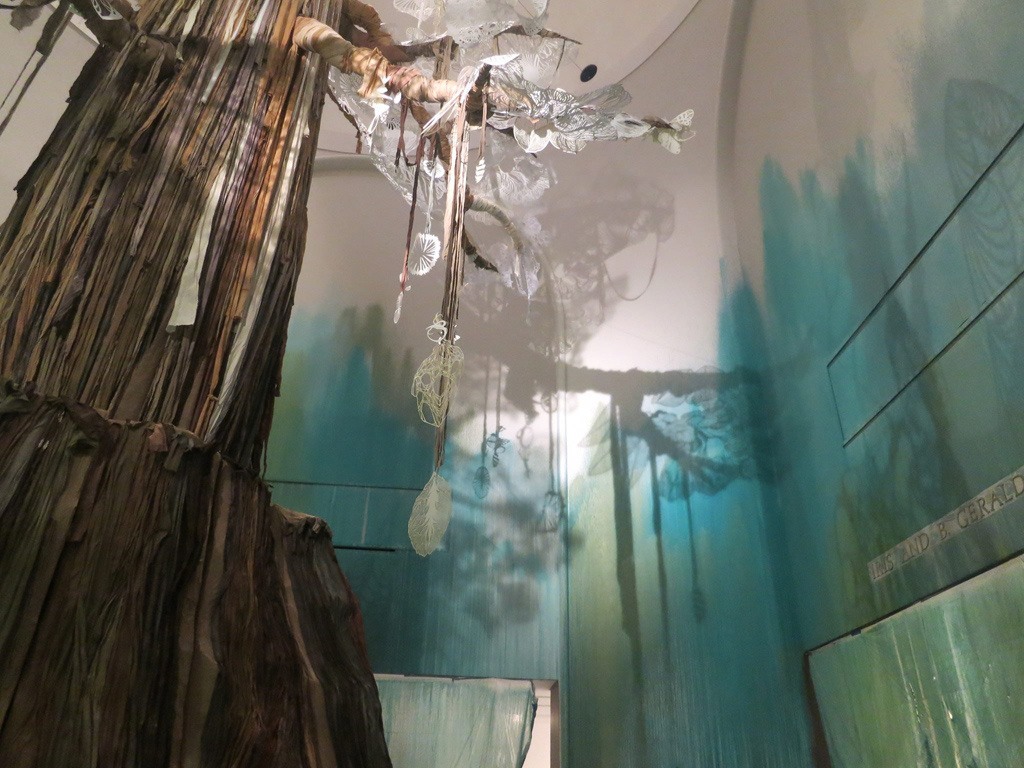 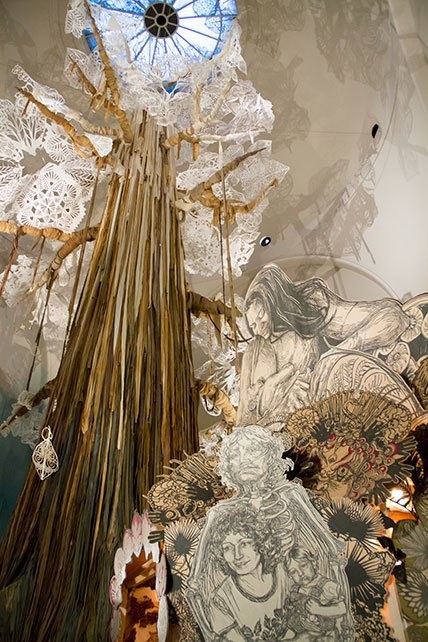 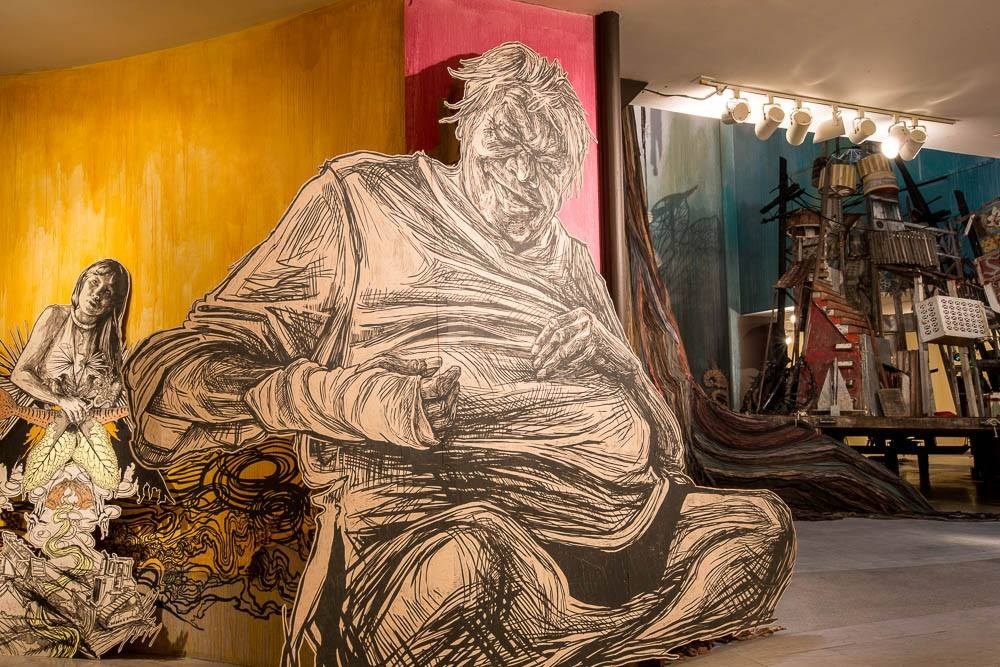 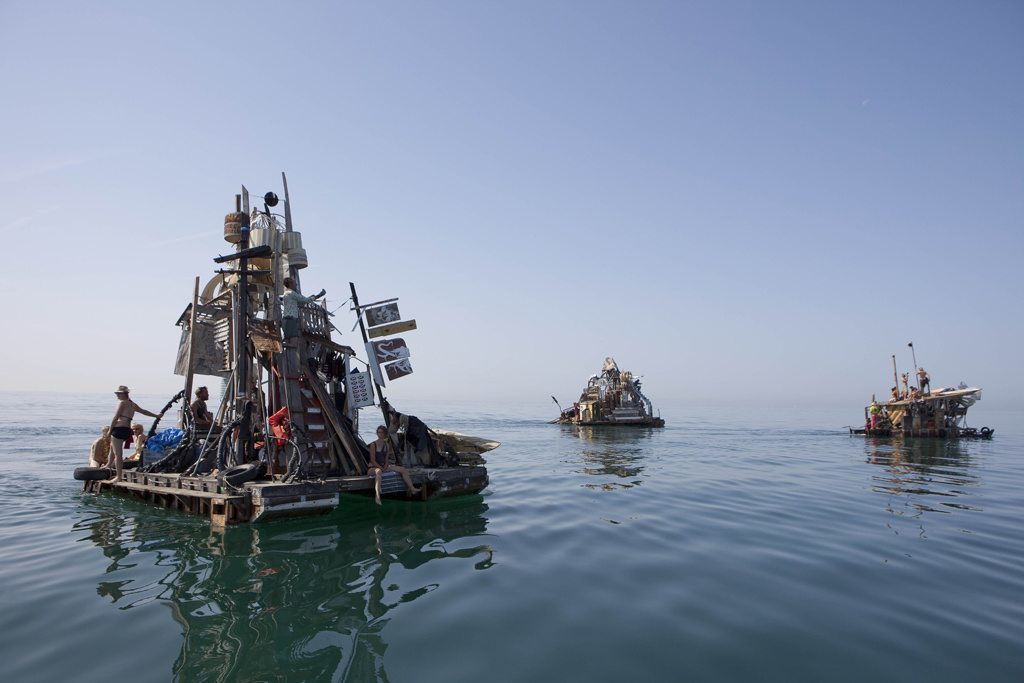 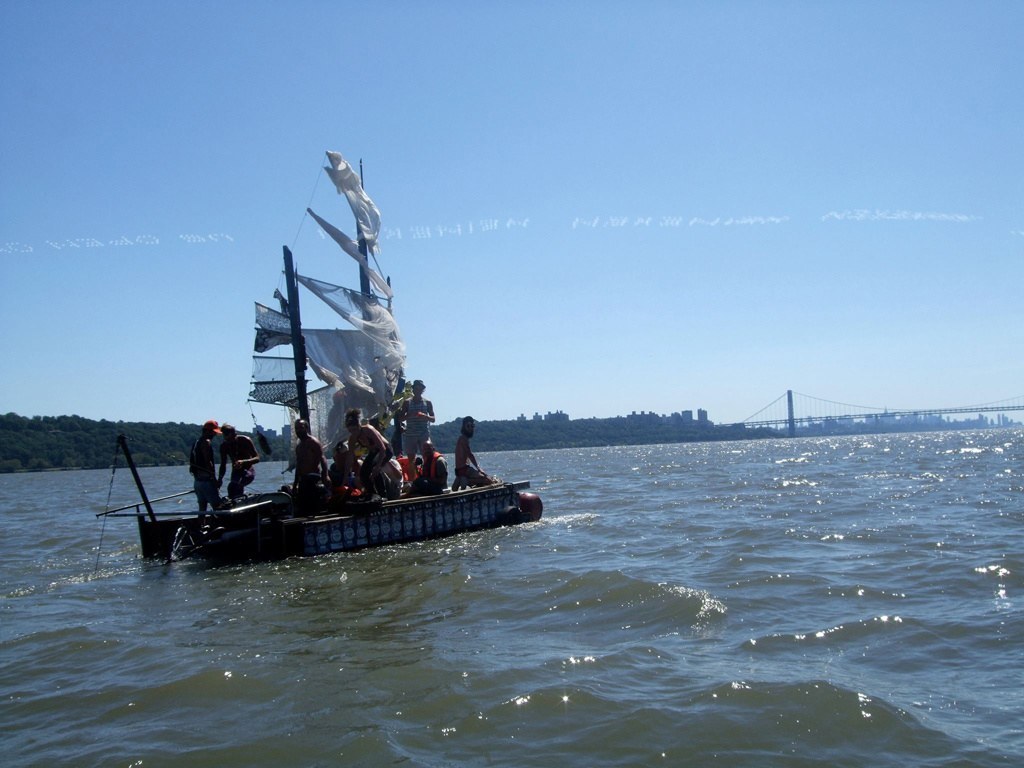 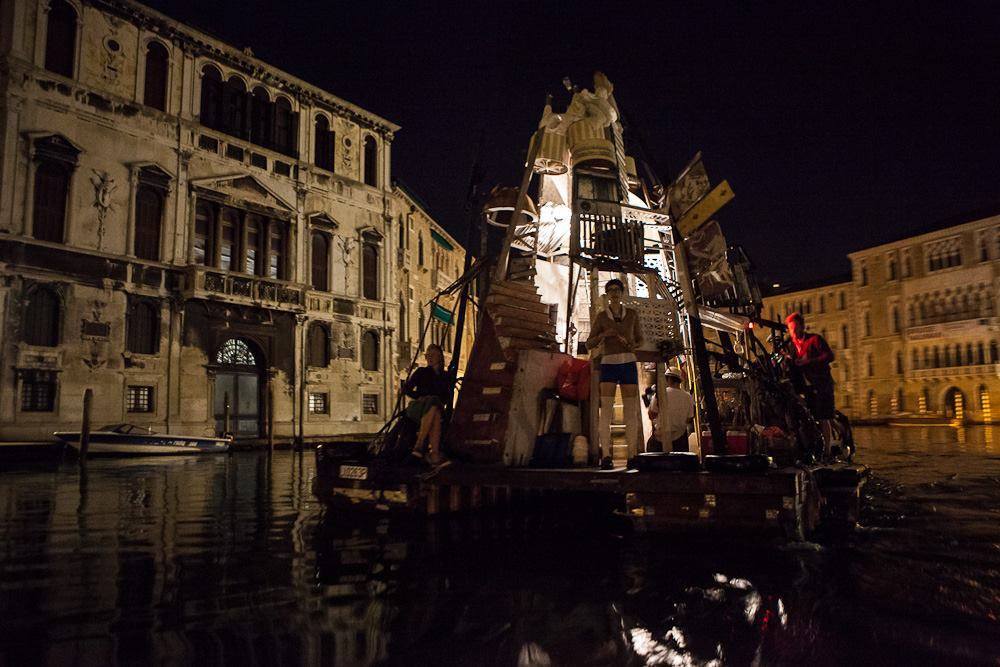 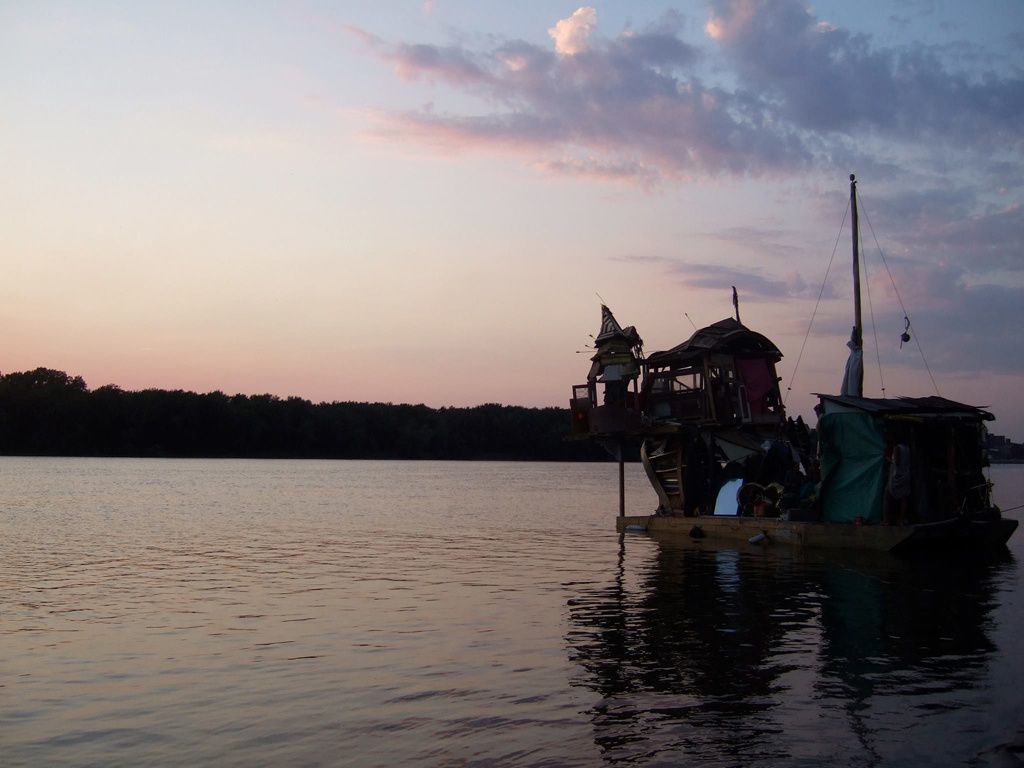