Matt Keegan is currently exhibiting at Rogaland Kunstsenter. The exhibition, titled PORTABLE DOCUMENT FORMAT, is the American artist's first solo exhibition in Norway. Below, curator and CAS editor Marte Danielsen Jølbo talks with Keegan about the exhibition, working at the kunstsenter, and his work in relationship to this new Norwegian context. 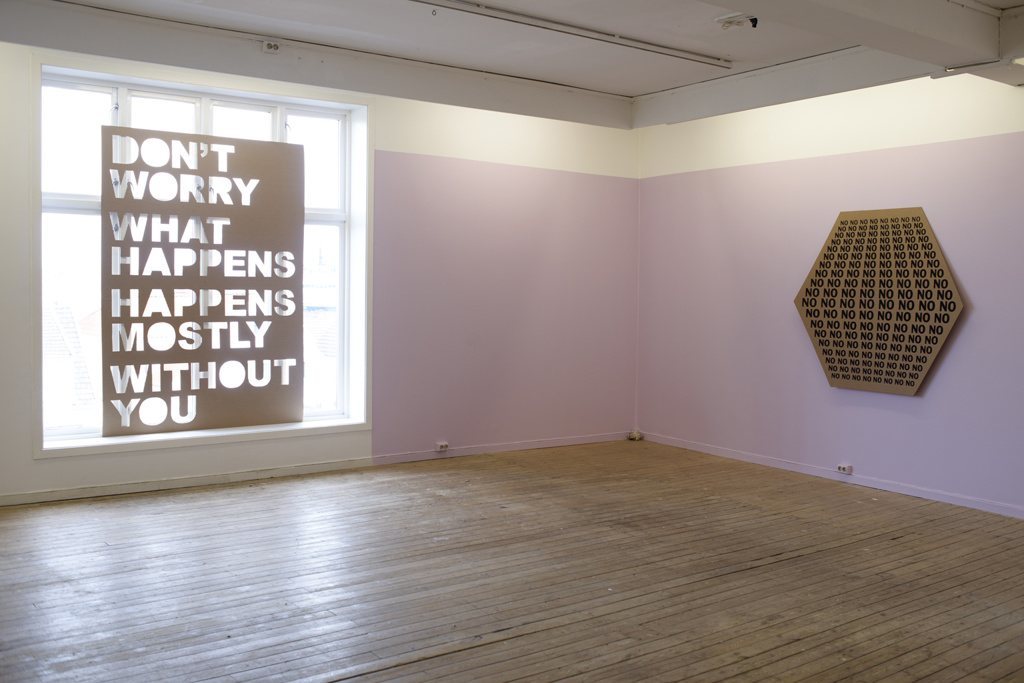 Marte Danielsen Jølbo: We can read in the invitation to the exhibition that this is a retrospective of your sculptural practice since 2006. The original sculptures were made in sheetrock (plaster board) and steel, but in this exhibition you present a remake of the sculptures in cardboard. What is behind this choice? Why this reflection and re-working of your earlier works now? (And are all the works presented re-produced or are there new works included as well?)

Matt Keegan: Portable Document Format will be accompanied by a publication that launches in the fall. This is the first opportunity that I’ve had to work with writers and artist friends to reflect on my work. This process of reflection was then translated to the work that I made in Stavanger.

I work with cardboard to make test versions of my sculptures. I figure out scale and design issues– spacing, font, and font size in this material, before making the work in steel. Because cardboard is already part of the work, it made sense to remake selected sculptures (from 2006-2014) in this material. Additionally, I wanted to produce this exhibition in the space of the show. Everything was either fabricated in the gallery or in the print shop in the floor below it. My work usually requires outside fabrication and I wanted this show to make use of the facilities that already exist within the Kunstsenter.

MDJ: The cardboard sculptures have been produced in Stavanger and will never leave the city as they will be destroyed and recycled after the exhibition period. How do you view the new works’ relationship to the original sculptures? What lays in the destruction of them?

MK: The various people who worked on the show will get to keep a sculpture of their choosing and the rest will be recycled. I think of these cardboard versions as placeholders or surrogates for the original works. They were made with a high-level of fidelity to the originals, but have a different life and circulation. These works were made in and for Rogaland Kunstsenter and were fabricated in a material that is easy to dispose of for that reason. I don’t think of this gesture as destructive in a dramatic sense, it just highlights the run of the show and mirrors the life of the exhibition.

MDJ: The material, as a surrogate, or a sketch, also has a different potential than the works you would normally display in a gallery situation. RKS director Geir Haraldseth says he’s inclined to think of it as a way of internalizing the art center, which is a very different entity for showing works of art than for example your gallery Altman Siegel where you exhibited earlier this year. What are your thoughts on this? And the specifics of showing in the non-commercial context of the art center? Does it give you the opportunity to pursue some other interests/issues in your practice?

MK: I agree that this show is different from a commercial gallery show like Altman Siegel, but not because the work is made in cardboard, or because it was produced on site. The main difference is the retrospective nature of the show and the process of remaking and exhibiting pre-existing works. Exhibiting at a non-profit institution removes any concern about selling work and recouping production expenses, which is freeing. This particular exhibition also made more sense for a new audience in a country that I have yet to exhibit in. It’s an introduction as well as a looking back.

MDJ: Can you tell us a bit about the background of the exhibition’s title Portable Document Format?

MK: PDFs are familiar, compressed, and easily circulated file formats. The show has an efficiency that I’ve stated above. Since all of the exhibited works began as file formats—whether Microsoft Word, Illustrator, InDesign, or CAD, and eventually become Jpegs or Tiffs, I think of these works as existing in a space between file and artwork.

MDJ: You often use text in your work, with an emphasis both on letters’ form and the patterns they make, as well as the content’s meaning and references. Can you tell us how you became interested in using text and how you use it in your practice today? (How) has it changed over time? (Possibly also talk about the use of humor here).

MK: I have worked with text since early into my undergraduate studies. I’m not sure why I’ve always been interested in this, but do know that the pedagogical emphasis on discourse (conversation and exchange) where I went to college was central to my interest in becoming an artist.

The way that I incorporate language today is not so different than how I worked with it then. I’m drawn to vernacular phrasing and words and phrases that have an open-ended (or emptied out) meaning. I’m often drawn to phrasing that has an inherent symmetry (More Like Mother/Father for example) and can be used to build a pattern, shape or otherwise.

N as in Nancy— the video that features my mother assigning words and phrases to her handmade collection of flashcards, originally used to teach English-as-a-Second-Language students, injects the most humor into the show. Translation can provide funny results. Language and meaning are both slippery. There’s a fluidity (speed) to language, and when it’s presented in fragments or without context, there’s an awkwardness that underscores the absurdity of the clarity / consensus that language (spoken or written) purports to have.

MDJ: You also have a work in the exhibition that states the name ‘Meryl Streep’ repetitiously. What is the background of this work? Why her?

MK: Meryl Streep is a replica of a sculpture that I made in 2008. The original was made in sheetrock with 5-7 layers of primer + paint and then cut and peeled to the paper just before the plaster. I then went back in with gold leaf, to gild actress’s name. For Rogaland, I remade this work by silkscreening her name on a sheet of cardboard. I decided to remove color from the sculptures, beyond the colors of the double-wall cardboard + black and grey.

The short version of the back story for this work, is that I had a solo show in 2008, my first in Los Angeles, that highlighted points of comparison between the final years of the Reagan Administration (mid-to-late 1980’s) and the lead up to the 2008 US presidential election, after George W. Bush’s two miserable terms. I mapped political as well as social/ cultural overlaps between these time periods, using a 1986 fundraiser called “Hands Across America” as a point of departure. I also focused on the public emergence of AIDS during Reagan’s presidency, and candidates, including Barack Obama, tendency to heroicize/mythologize Reagan’s presidency. In researching popular music, books, and movies of the 1980’s, I realized that Meryl Streep was in a movie every year, that decade. I created a portrait that highlighted her as an icon of that decade, as well as 2008.

MDJ: You mention earlier that the exhibition will be followed by a publication this fall. Can you elaborate on how you view your work with the publication in relation to the exhibition? And can you tell us more about the role of publications and publication making in your art practice in general?

MK: The publication is a direct extension of this show and not an exhibition catalog. In some ways I consider it to be a second site of Portable Document Format, although both are self-sufficient.

I’ve worked as an independent publisher since 2004. Between 2004-2010, I edited and published a small-run arts edition called North Drive Press (NDP). Between 2005-2007 I was involved with curatorial projects that had significant publication companions. In 2012, I began a new edition called == (www.equalequal.info) that is an extension of NDP with a focus on featured artists, as well as more written content.

Working on all the above for over a decade directly impacted my thinking about exhibition-making and display structures. NDP was an unbound publication that came in a box, and informed my ideas of how to arrange and reconfigure the box of a given venue to best present my work and engage its audience.

The exhibition PORTABLE DOCUMENT FORMAT is currently on view at Rogaland Kunstsenter. For more information, visit the kunstsenter’s website, here. 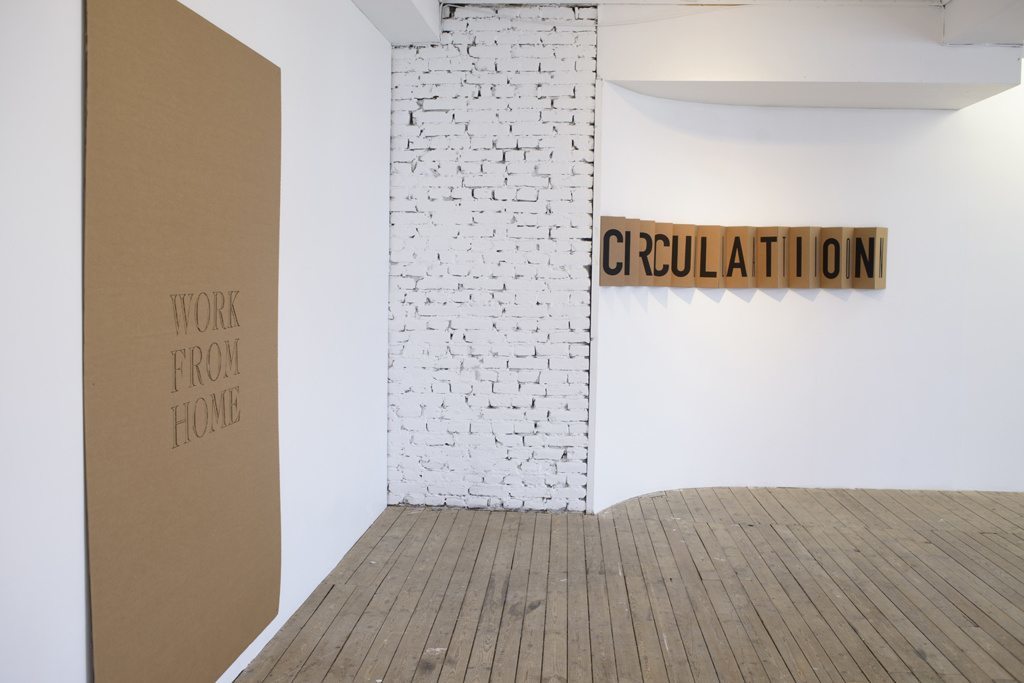 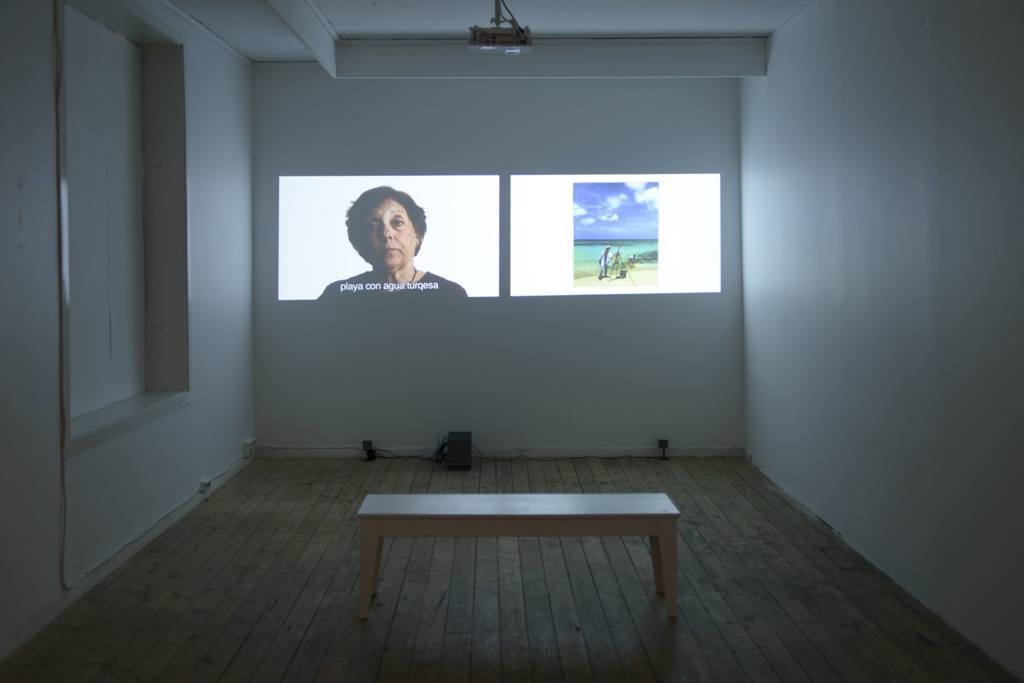 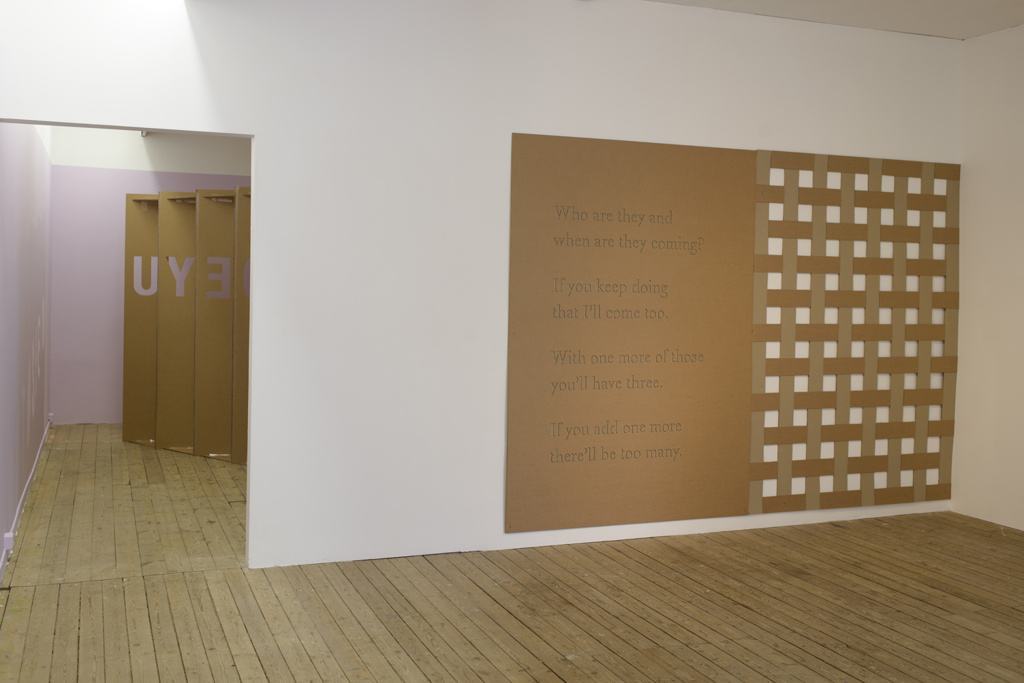 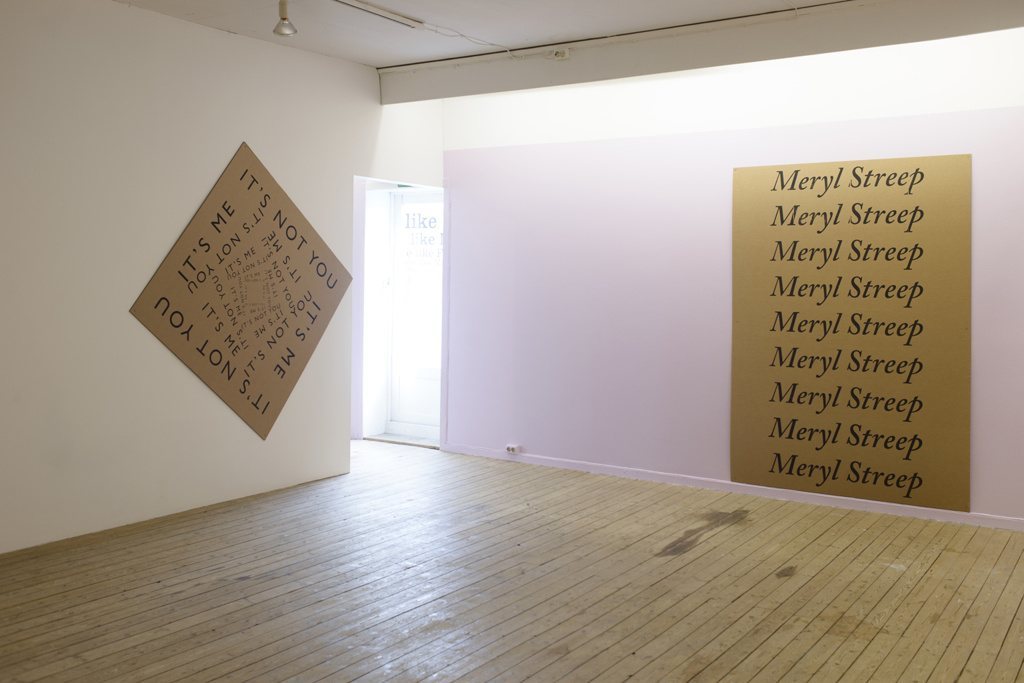 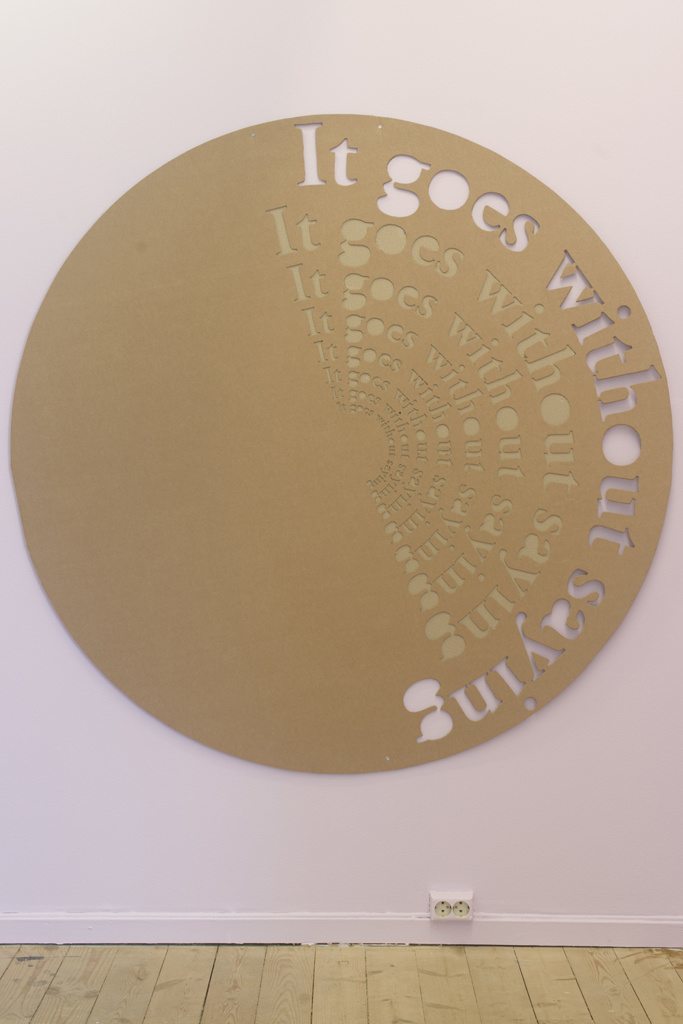 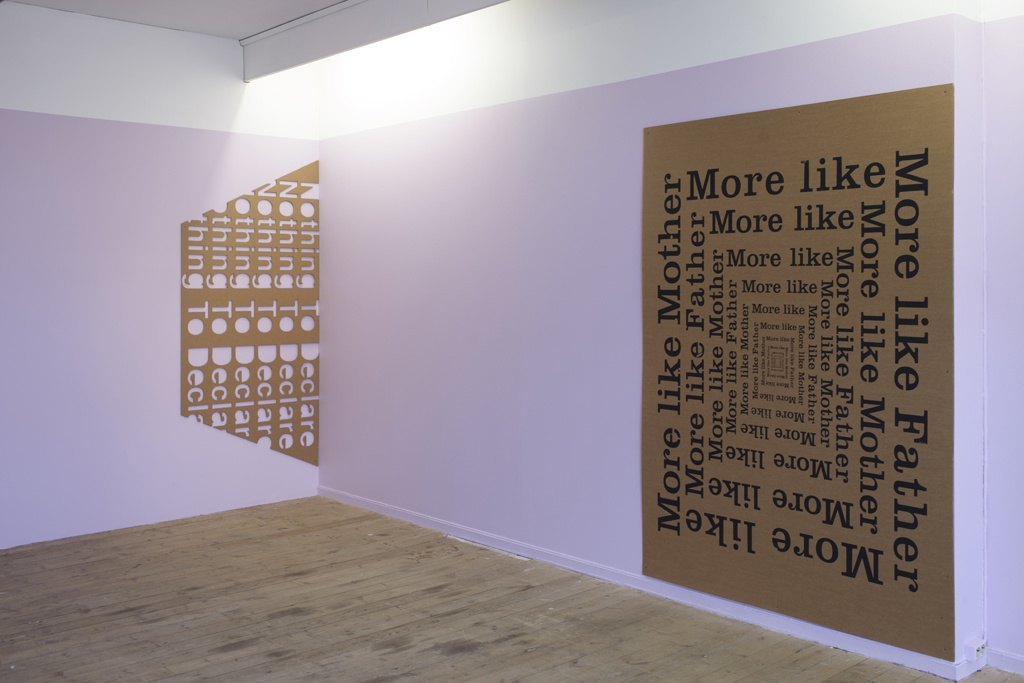 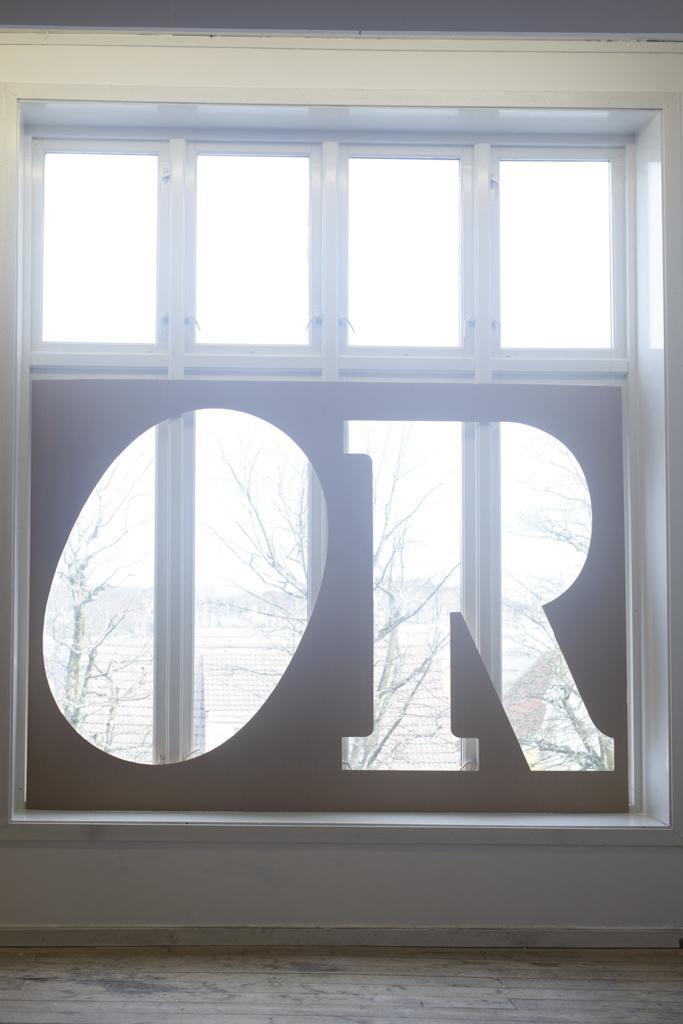