The below essay is written by Mathias Kryger in connection with zir stay in Stavanger as part of the Contemporary Art Stavanger (CAS) Residency pilot project. 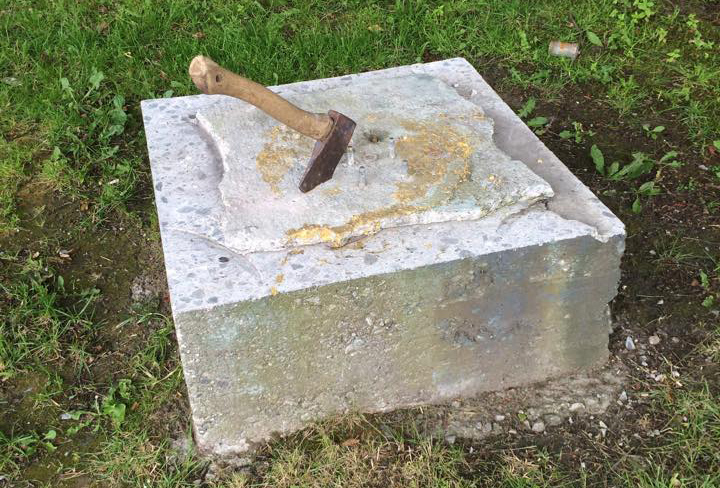 There is virtually no information online about the abandoned psychiatric hospital in Dale, Norway. The place is located in the countryside outside of Stavanger, and spreads enormously over the landscape, but takes up almost no space on the internet. In truth, there is a Wikipedia entry, but the density of information is like a Morse code into the history of psychiatry, a kind of Twitter before Twitter: years and facts about the various patient groups as well as a link to a very short article in Stavanger Aftenblad from 2006 that almost ends before it starts. The narrative around Dale unravels almost entirely before it has even begun, and it seems as though one can hardly grasp the architectural and mythological extent of the place. What to do with the story? There are several articles in the daily press about just this specific question, and it seems that Rogaland County Council cannot solve the puzzle. Should it be torn down? Should it be converted into housing? Should it be renovated and used for housing asylum seekers?

Money is pouring out of projects that never materialize and it is written somewhere that there is interest in selling the place for one Norwegian Krone. Norway’s oil industry is mentioned as ‘The Oil Adventure’ in a timeline for the development of psychiatry and the history of Dale: “1961 – a new law on mental healthcare statements is adopted; 1962 – The Oil Adventure starts; 1964 – Dales’ doctors receive their own housing and studio apartments are constructed.” Thus the adventure begins…

The oldest part of the Dale Asylum was built in 1913 and was originally intended as a facility for mentally ill men. The building is a monumental, Art Nouveau structure located relatively high and facing the bay. The view must have been terrifyingly beautiful. At some later stage, the large, main building had been ‘rebuilt’ with new windows and consequently stripped of its architectural details. Today is appears flat, closed, with a peculiar lack of a central or welcoming entrance. It’s a house with no doors but is as open as a sieve: the windows are completely smashed allowing free access to anyone who desires it.

If reports are to be believed, this is a site of techno raves. The local police perform exercises inside the building, so reads the seemingly homemade, laminated signs hanging on or lying around smashed windows and kicked-in doors.

Behind the building sits a heavy mountain and in its shadow – and on the house’s generally shadowed, mossy side – is a small, oval, wooden pavilion. It could be the break room for the techno rave, or a place where a patient would smoke cigarettes in solitude. In the years after the main building was established, several large additions to the hospital were built including an entire section that housed 112 female patients. Employees of the institution lived in the area and their children attended a school that was established on the hospital grounds. Agriculture as occupational therapy was part of the hospital’s activities. Today sections of abandoned, 1980’s studio-style apartments can also be found here: terraced, two-story houses.

In Stavanger, on the other side of the fjord about half an hour by car from Dale, they eat pizza with oily sardines down by the city’s centrally located lake, while the conversation is perhaps no longer focusing on the falling oil prices. Fifty years of black-colored liquid adventure may end while attempting to convert the primary industrial production back to fish rather than oil.

Inside a newly opened café: I order juice with ginger and the person at the counter and I chitchat about Stavanger and art. This is the first time I hear what sounds like ‘new art’ but as I find out later is spelled Nuart. “Stavanger is filled with street art”, she says. “You cannot miss it when you walk around the city,” she continues. Since 2001, the street art festival Nuart has spread over the walls of Stavanger, hidden in crevices in the public domain, and presented in indoor exhibition formats around the city.

The year 2001 marks rather precisely the time in which street art entered the fine arts discourse in this part of the world. And it is worth noting that the art form’s propagation has occurred in parallel with the economic boom of the noughties and the art that followed this economic development: namely colorful painting and marketable formats to an overgrown art market. The street artists follow this movement all the way into the commercial galleries and, in a way, become representatives of a frivolous and anti-intellectual parallel to the sellable academic art produced within this period: an even less rigid and more accessible art form that appeals to younger collectors with new, fresh money. They are a fresh stable of collectors that identify with street art’s narrative as being an unpretentious avant-garde winning new territories, much like the collectors themselves who have gained economic territory, equity and pan for gold in metaphorical stock-Klondike. It was during this same period that great wealth was created by slapping colorful motifs onto t-shirts and selling them en masse. And it was during this period that street art seems to break away from the lawlessness of graffiti and was catapulted into an entirely different synthetic and economic sphere.

Therefore from the outside, for Nuart to spread this type of artistic activity within a non-urban environment like Stavanger can be understood as nothing but the manifestation of an entrepreneurial, synthetic and desperate gold-digger mentality. Abandoned, demolition-threatened wooden houses in the center of the city are being painted over by artists who probably do have a political statement embedded in the symbolism they deal with – street art can highlight the constant monitoring of the individual by Google; it can illustrate themes of racism and migration – but the street artists do not relate immediately to the political reality in which their art is enrolled. The demolition-threatened houses are now closer to redevelopment than before, and the municipality may soon choose to tear them down and sell the land for new construction projects.

It might be interesting to make a comparison between Nuart’s situated street art that helps to perpetuate the gentrification process in Stavanger, and the self-organized rave parties at the psychiatric hospital as a destructive decontaminate and subversive force in Dale.

And it is clear that there is a difference between the Flügger-sponsored rehabilitation and the individual’s own destructive power and desire for smashing windows and doors, and more conceptually, the pulverization of the architecture of society in the case of Dale, once thought of as a storage facility and healthcare machine for psychiatric patients. The resulting destruction is perhaps similar, the degree of Madness far from it.

In the year 1970 the hospital added a recreation building with a gymnasium, cafeteria and swimming pool. The structure is tucked up on a hillside where the landscape is now about to take over and where street lamps look as if they have sprung naturally from the ground. Here the graffiti is thick as oil, and the destruction is beautiful and as scary as a Hollywood horror movie.

Destruction and landscape in equal measure seem to be a recurring feature in the mythology of Stavanger. The case of the Barbara Hepworth sculpture Figure for Landscape and its subsequent sale by Kunsthall Stavanger a couple of years ago has long since gone through an emotional myth-making process as well as transcending concepts of reason and reality. Was the sculpture a gift presented to the city of Stavanger in the year of our Lord 1968? Was the gift a kind of consolation for the removal of part of the Kunsthall’s garden area in order to construct a larger road? Indeed a very large road now runs in front of the place where the sculpture once stood. Is it therefore an ironic gesture that it was precisely the sculpture Figure for Landscape that was chosen to be installed in this place that, if not then as now, is congested and far from a natural landscape? Are there others apart from myself who think that from a certain angle the sculpture resembles a one-eyed version of the mask from the Hollywood horror film franchise Scream?

And is it in any way productive to think of the relationship between the Hepworth-Scream iconography and of Norway’s most iconic artwork The Scream? (Is it too much to point out Edvard Munch’s mental illness as a machine for producing amazing artworks and, in the context of the present text, connecting this to the psychiatric hospital in Dale?). Is the local art scene in Stavanger split into two factions, one for and one against the sale, which has long been completed and which earned over 4 million pounds sterling?

In 2014, the young Stavanger-based artist and curator Siri Borge, along with artist Bente Aanestad, initiated the exhibition series Occupy Landscape as an intelligent negotiation of the conflict between the sculpture and economy in the case of the Hepworth sale. The two organizers encouraged the absence of the sculpture to be replaced by an energetic and nervous (in a good way) activism. The empty concrete pedestal on which the sculpture was previously positioned was used conceptually and physically as a place where a number of younger artists could take part in the discussion through action and exhibition, and thus engage actively in the discussion. Occupy Landscape was, as far as I know, not sanctioned by the Kunsthall and was therefore a true occupation, a loving rave party on an already pulverized site in an art field that – even in Norway – must tie itself in knots to survive. Occupy Landscape was probably a kind of inverted iconoclasm, but also a strong expression of the reality that although Hepworth is no longer among us, we are still here. In this way, Occupy Landscape is far more the rave party taking part in the energetic destruction of the out-dated psychiatric hospital buildings in Dale than the hectic and economically-driven festival of street art that occupies the city walls of Stavanger and satisfies politicians’ visions of growth.

The pulverization of anything existing is a lot of the time much more fun when it happens at night, lit only by secret hashtags.