The Look of Now

The Look of Now

Identity Pitches is new book by Stavanger-based artists Cory Arcangel and Stine Janvin, published in September by Primary Information, New York. Below, CAS Editor Heather Jones discusses the book in relation to the artists' larger ongoing project, as well as how it relates to art history and cultural evolution. 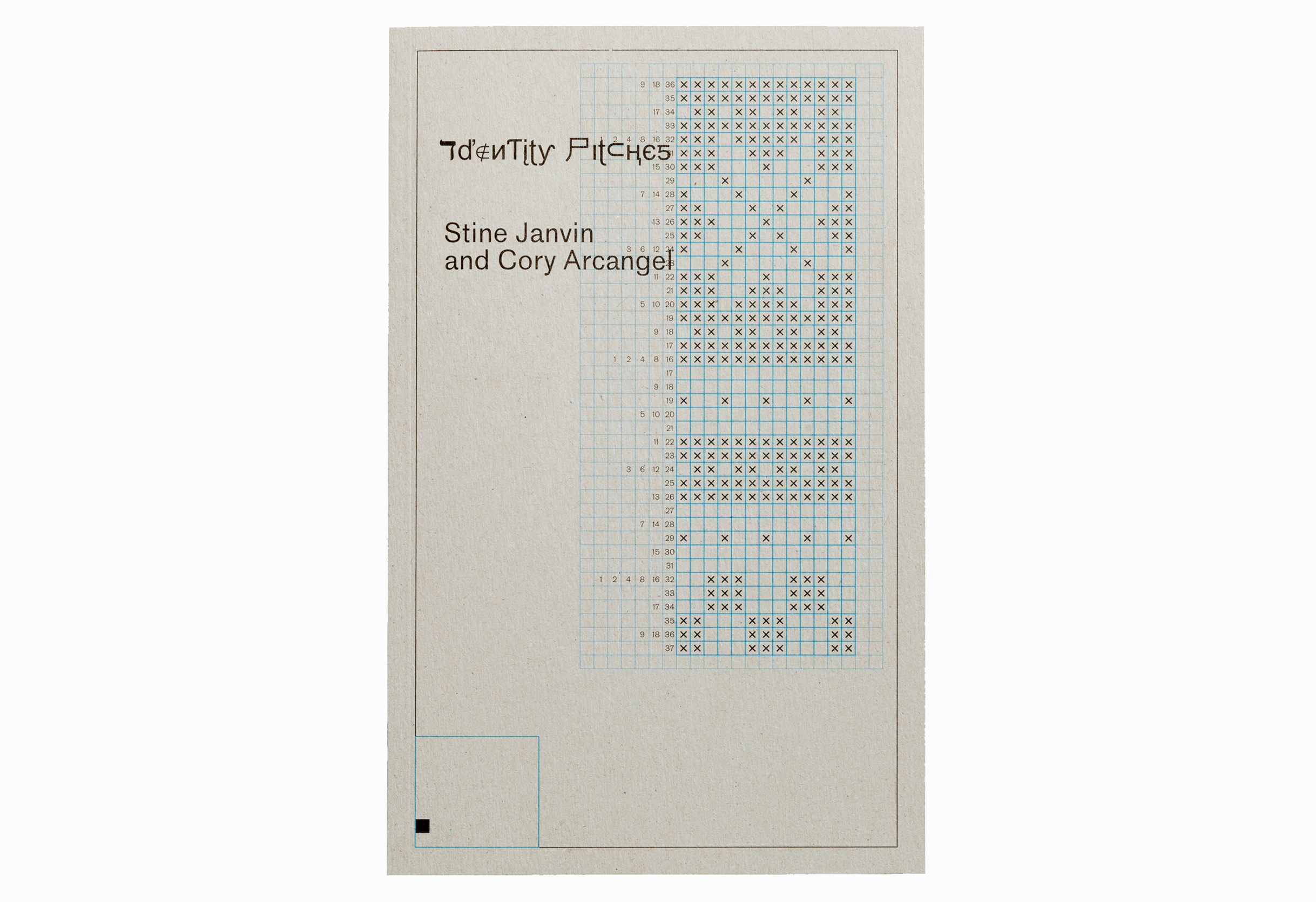 “The sweaters, the patterns, the music, all traditions, they change all the time. We like the fact that these sweaters are still being used by all kinds of people, that the tradition is alive. And the code represents how culture, through images, lives online now. They go through these processes so they’re also living. These final patterns are the look of now.”

Identity Pitches, a new book by Stavanger-based artists Cory Arcangel and Stine Janvin, feels like the love child of a sweater and a computer that met at a concert and got frisky. The book is equal parts artist book, project documentation, and instruction manual. Though it doesn’t say so in the book, it is phase one of an ongoing project that involves questions of national identity, knitting patterns, musical scores, and the transformation of images on the internet. To the casual reader, Identity Pitches is a quirky mash-up of folk techniques and digital technology. However what the project really does is reveal the true evolutionary processes of culture and serves as a blueprint for the re-enlivening of so-called “traditional” craft.

The book was published in September 2022 by Primary Information, New York. It’s an intentionally small paperback book; 6x 9.5 inches and 84 pages. Any less information would leave a reader confused, but any more would quickly feel unmanageable. The design of the book is blessedly minimal . 1 The project contains enough complexity to consider without forcing the reader to wade through unnecessary decoration.

The title, Identity Pitches, is on the nose. It references concepts of identity contained in traditional dress and music, here specifically the three most common patterns of lusekofta – Norwegian sweaters – and the natural scale of Norwegian folk music. I wonder if it is also a double-entendre suggesting “pitching” a new idea of identity in the remixing of traditional crafts contained in the book.

The book is divided into six main sections. The first shows images of the three traditional patterns of sweater that serve as the basis for the project – Setesdal, Fana, and Selbu – with a brief description of the appearance and history of each. Following that is a preface by Arcangel and Janvin describing their meeting and the impetus behind the project – more on this later. Then come the musical scores, written by Janvin, in which she employs the “just intonation” and “natural scale” found in archival recordings of Norwegian folk music in order to derive musical scores from the traditional knitting patterns. 2 This methodology is perfectly in line with Janvin's practice, which revolves around the "ambiguous qualities of the voice and the physicality of sound." In this, we can trust that she knows what she's doing. This section includes a detailed list of instructions on how to “play” the patterns, as well as graphic representations of each pattern followed by the score.

At this point Arcangel, who is well known for his manipulations and modifications of digital material, included a code to “deep-fry” 3 the patterns and scores, followed by the resulting sweater patterns. The reader can immediately envision the contemporary look of the new sweaters, were they to be knit, as well as the droning music of the new scores. 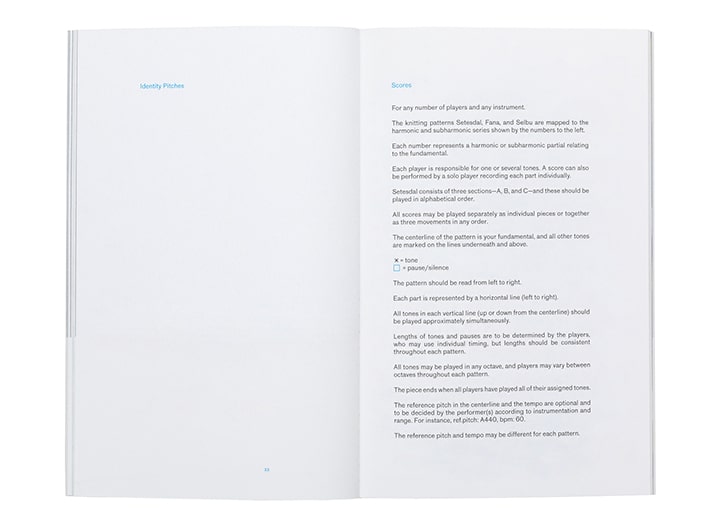 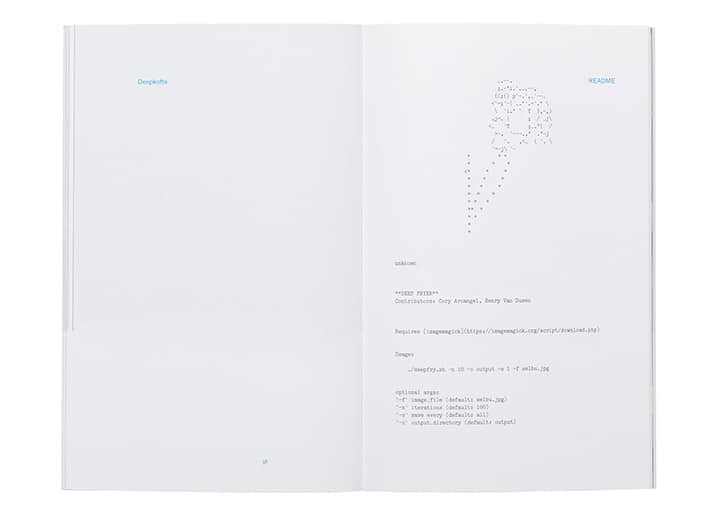 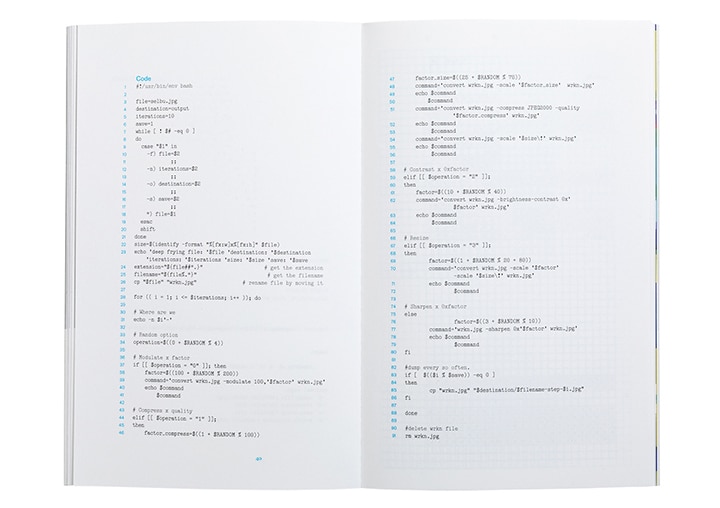 The book’s strongest feature is its potential usability. Arcangel’s code can be used to deep-fry any image or pattern (this was confirmed by a software engineer that read through the code for me, although he complained about the use of bash as a coding language), and Janvin’s process for creating musical scores could be applied to a wide variety of other traditional techniques. Thus it was mildly frustrating that several sections of the patterns were lost in the gutter, somewhat detracting from the book’s functionality. Further, as a non-musician, the midline for each score was not immediately obvious (the midline is marked with 124816 for those interested in playing it). None of this detracts from the book’s conceptual rigor, but these minor issues are hurdles to be cleared if the scores are meant to be activated as the artists suggest.

There is a fair bit of musical jargon and printed code to plough through which might be off-putting to the spontaneous reader. That said, I would assume that most people picking up a copy of Identity Pitches are already familiar with the terminology associated with Janvin and Arcangel’s practices. And really, the book could not function as a manual without it – the project itself is a musical score and a code.

Speaking of scores, I would feel remiss if I didn’t at least mention this project in relation to Fluxus scores of the 1960s-70s. While speaking with Arcangel and Janvin, I asked if they were influenced by Fluxus. While Arcangel admitted to realizing that Nam June Paik is one of the top five greatest artists of all time, they reminded me that a score is largely how music functions, how it travels and is transmitted. Many Fluxus artists adopted the concept of a score for their performance pieces and instructions for projects to be completed by viewers. However Identity Pitches is less connected to this art history and rather rooted directly in the functions and methodologies of music.

Towards the back of the book is a conversation between Arcangel and Janvin, through which the reader can gain an inside look into their personal interests and approaches to the project, as well as their process. This is where the questions of identity are most heavily elucidated. After living abroad for nearly six years, Janvin returned to Norway and saw the local geography and culture with fresh eyes. In her explorations of what it mean to be authentically “Norwegian” she was drawn to extant folk traditions such as the bunad, lusekofta, music, and dance. On the other hand, as a New Yorker now living in Norway, Arcangel was impressed by the ubiquitous and un-ironic use of the lusekofta across nearly all demographics. From this point, and over the course of several years, their ideas slowly developed, devolved, dissipated and came back together into a cohesive and tightly focused project – the first phase of which is this book.

The book ends with color images of the new, deep-fried sweater patterns – a warped mirror image of the pictures of traditional sweaters at the beginning of the book. It’s easy to imagine these as contemporary sweaters sold at a high-end design boutique. They’re bright, blocky, and graphic, reminding me of the Gee’s Bend community’s take on traditional quilting, artist Ahmed Umar’s reinterpretation of the Norwegian bunad, and Yinke Shonibare’s merging of Ankara fabrics and colonial European dress.

I mentioned earlier that Identity Pitches is the first phase in a larger project. At the time of publishing this review, the artists are planning phase two: a tour where they will perform the new, deep-fried musical scores. Phase three will hopefully be a limited production of new sweaters based on the deep-fried patterns in the book.

In their creative process, Arcangel and Janvin are doing what cultures have always done: remixing, reinventing, and merging techniques. Although to my modern (perhaps distinctly American?) nostalgic sensibilities, this feels heretical, Janvin assured me that in Norway, the remixing of traditional patterns is vigorous, particularly among a younger generation, and not at all taboo. She reminded me that knitting patterns have always been reworked according the geography, need, and taste. It was/is companies that codified, standardized, and marketed these patterns as traditional. Before that, patterns would pass between households and villages, constantly evolving along the way.

Reading Identity Pitches, I was reminded of the first time I saw a lusekofta. While living in Brooklyn a little over 10 years ago, I hosted a Norwegian artist and her partner who were in the city for an exhibition and performance. The artist’s partner was a strapping Norwegian man; tall, blond, ruddy-cheeked, a carpenter living in Svalbard. He was swarmed by young women at the exhibition’s opening in Williamsburg. One inquiring woman remarked on his thickly knit sweater, asking him where he got it. He looked bemused and responded in a lilting accent, “My grandmother made it for me.” At this, I witnessed the young woman spin around, dramatically grab her friend’s arm, and whisper loudly, “OH MY GOD! He is, like, SO LEGIT!” Somehow this sweater, handmade by a family member, legitimized him… but as what?

In Identity Pitches, Arcangel and Janvin invite us to question these myths of tradition, legitimacy and authenticity. The book is not really about knitting patterns, or music, or the digital life of images. It is an investigation, through a tight lens, of culture itself – how it changes, remixes, and remakes itself when given the opportunity. How it LIVES. This book and ongoing project remind us that in order for cultural practices to exist outside of a museum setting, they must evolve according to the needs and tastes of contemporary society.

Heather Jones is an American writer and curator currently working in Sweden and Norway. She is the International Editor of Contemporary Art Stavanger (CAS) and a member of Norsk kuratorforening.

Cory Arcangel: Another Romp Thru the IP (Times Square edit)