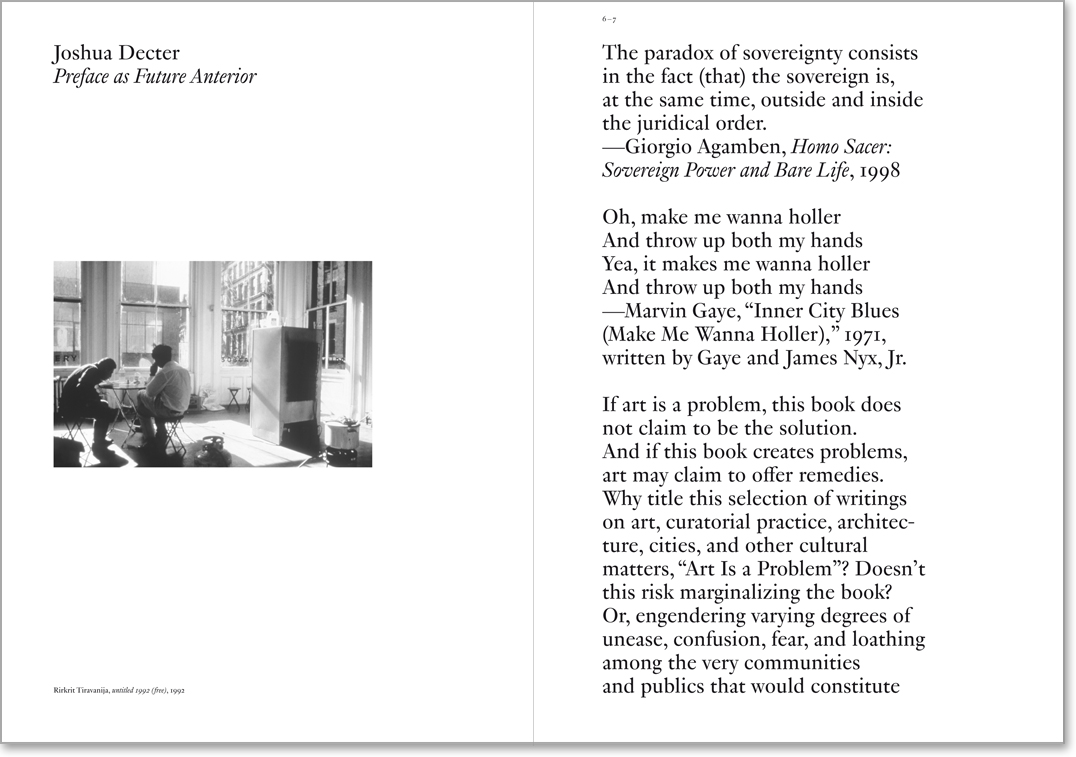 Curator, art critic, and writer Joshua Decter (US) has been working with contemporary art – and what he finds problematic with it – for nearly three decades. Last August Decter came to speak about his work on art in public space at Rogaland Kunstsenter, in conjunction with the center’s launch of the book Kunst By Befolkning. The book details the Art Center’s projects in the public space from 2003-2013, and the addition of Decter’s observant approach to working with art and what art’s function should and should not be in society was greatly appreciated by the audience. Earlier this year a collection of his selected essays, criticism, interviews and curatorial projects produced between 1986 -2012 was published. The book is appropriately titled Art is a Problem, and delves into several aspects of his work.

The eclectic mix of texts and subjects has been divided into seven chapters that make it easy for the reader to navigate: Institutional Critique® and its Discontents; Aporia (Art as Politics, the Politics of Art); Everything is Social (Platforms, Participations, Publics, Constituencies, Networks, Spaces, Sites, Situations, Collaborations, Cooperations, Conflicts, Interventions…); Convoluted Cities; The (Un)De-definition of Art; What Do We Want from Exhibitions?; and On the Curatorial Road.

As a main point of departure for the book, Decter raises concerns regarding art’s role in society at large. He has doubts about art’s ability to pose problems to, and create change within, the dominating global social, economic and institutional networks. Contemporary art circulates in an insular system where all institutional critique and attempts to break free from current power relations and hegemonic structures are inevitably swallowed and reproduced within the same system. This is a big threat to the relevance of art as Decter sees it: “The more tolerant or liberal a society becomes, the more art becomes a naturalized, normative element within an environment of unfettered (and perhaps increasingly undifferentiated) creative production.” (p.9).

However, Decter does at the same time express a strong commitment to art and might hope that art still has the potential to be oppositional. Through a wide range of reviews, previously published in various art magazines, he gives concrete examples on how art still has the power to critique, make waves and raise awareness. The book includes a text on the project stazione by artist Emily Jacir (pp.142-145), a commissioned, collateral event for the 53rd Venice biennale, which was abruptly cancelled by the Venice municipal authorities. In short, the project was a public intervention where “[…] the temporary inscription of Arabic translations alongside the Italian names of the vaporetto stops on the legendary route #1 along the Grand Canal […]” were followed by a brochure presenting examples of how Arabic culture has historically influenced Venetian architecture and life. In this short text, Decter interestingly reveals how a relatively small art project could upend established notions to such a degree that local authorities actually chose to censor a project that was part of one of the largest and most historically important international art events – in the year of 2009.

As the book is a selection of different types of texts spanning over 20 years of cultural practice, it touches upon many trends and shifts in the artistic and theoretical field. We are invited into discussions on art’s definitions, functions, ethical entanglements, societal aspirations, and cultural contradictions. All through which Decter questions his own motivations as a white, male art critic to write these texts and his ability to actually reach out beyond an academic discourse. In his writing on public art for example, he does not only discuss various projects that attempt to transform our experience and understanding of urban spaces, but also gets into questions on what it actually means for artists today to intervene in the public arena, and what public space actually is. What logics of inclusion and exclusion are active in these projects and how can one avoid the structural conditions that seem to be continually reproduced, thus maintaining the normative systems?

Throughout the book the more theoretical and philosophical texts (where Decter makes heavy use of the critical and social theories of scholars such as Adorno, Baudrillard, Foucault and Said in combination with art historians and critics such as Benjamin Buchloh, Michele Wallace and Hal Foster) are combined with short reviews and critiques that illustrate the points and reflections raised in the more abstract texts. All in all, the book raises more questions than it answers. It reflects Decter’s ongoing project to problematize the parameters of art criticism and the hegemonic structures in the art world combined with his continuing desire to imagine that art can be relevant and meaningful beyond a relatively closed discursive space or community. 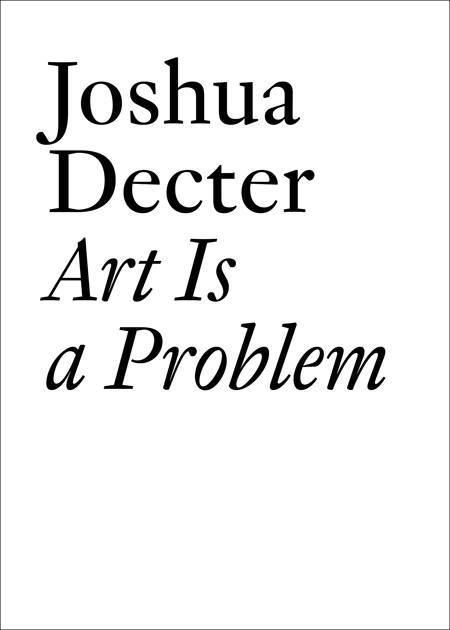 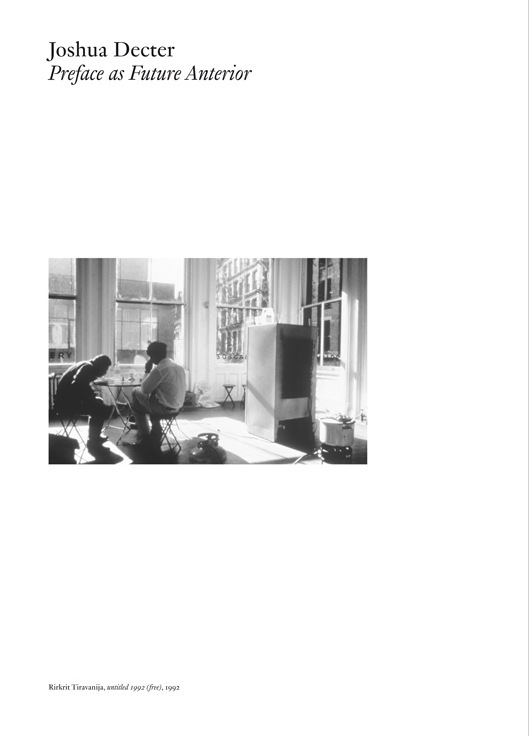 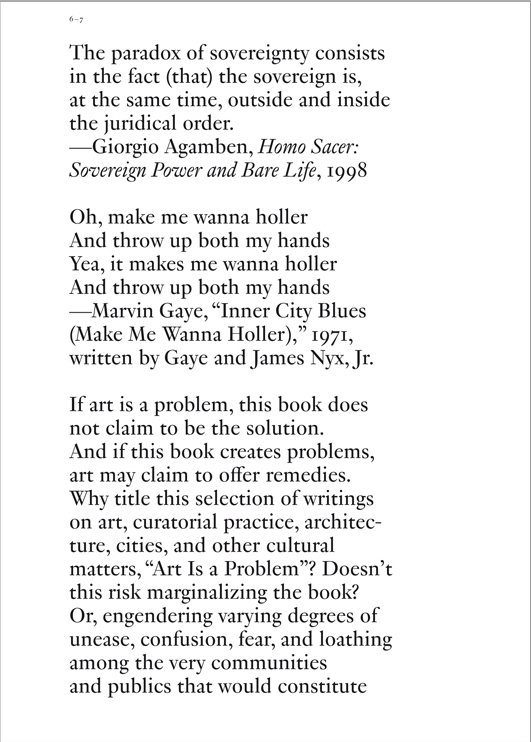 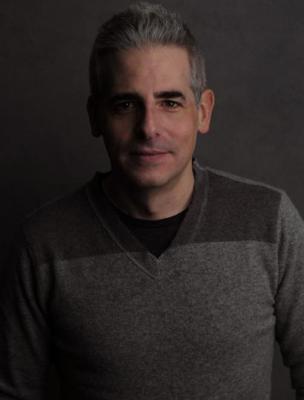 Art is a problem can be found at Rogaland Kunstsenter’s library or can be purchased online.