In the ongoing series "Built Environments", CAS provides a platform for a variety of perspectives on the urban landscape. In a two-part essay, researcher, writer, and former CAS resident Zofia Cielatkowska explores wealth, class, access, and the concept of glamour through a close observation of Arbeidersamfunnets plass in Oslo. The below text is Part 1, with Part 2 directly following. 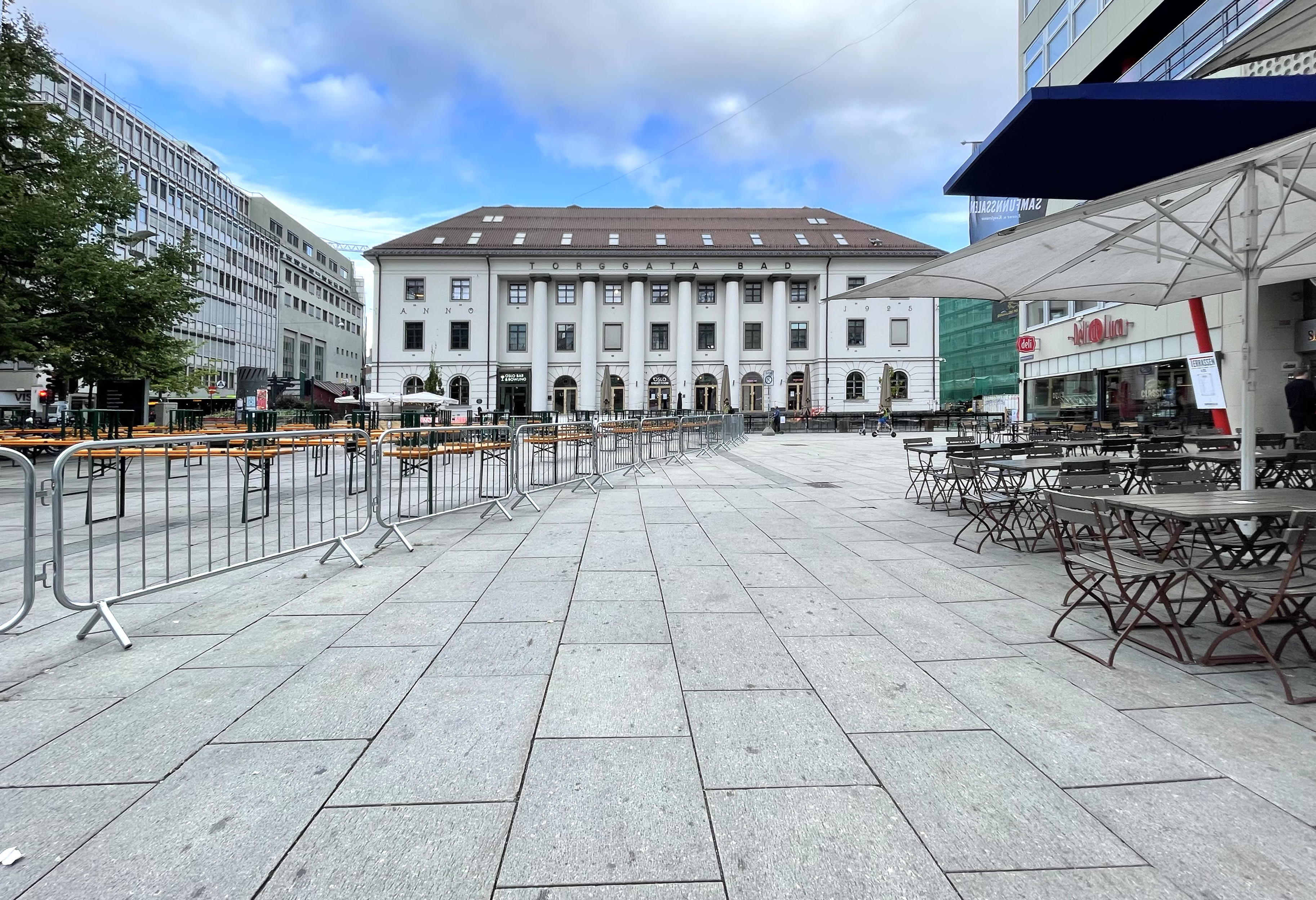 The current state of the Arbeidersamfunnets plass, May 2021. Photo: Viel Bjerkeset Andersen.

Spring is the mischief in me, and I wonder

If I could put a notion in his head:

‘Why do they make good neighbors?

I remember thinking about this line in the summer of last year, standing at the fenced Arbeidersamfunnets plass 1 in Oslo. I’m not sure if good fences make good neighbors, but those at the mentioned square, allegedly public, certainly barred people entrance to the space for the majority of the day.

As if magically transforming all passersby
– possibly citizens –
into unwanted strangers.

In the evenings though, a possibility to enter the square and claim a right to sit was open for those accepting certain terms and conditions: money and beer. If that’s the price to pay for public space, it is both too much and too little. But one question should be asked here in the first place; why Oslo inhabitants have to pay to enter public space and why to commercial actors? As spring is already here, and summer dawns on the horizon I really hope that rumors that the fenced installation might become a permanent one are just that: rumors. But then again, why would anyone care about this unglamorous part of the capital city that doesn’t even exist in the minds of many Oslo inhabitants as a square? Who would see this as a problem?

Arbeidersamfunnets plass is an ordinary place. It is definitely smaller than the nearby Youngstorget (Young’s Square) with its clearly defined political context and history. It doesn’t have the Picasso mural to gather protesters if the city decides to demolish it in the future (which would not help anyway). It is just a square. Or more accurately, it suggests being a square but lacks the sense of place that it used to have.

When we look at photos from around 2009 when the square was renovated, the space shows clarity in a literal and architectural sense as well as its functionality. The installation Towards North (Mot nord) by Viel Bjerkeset Andersen, encouraged people to stop and sit on the sculptures, while the grey lines traversing the square emphasized vistas. The space felt light and present. The original 2009 renovation plan placed a special emphasis on music and opportunities for various concerts, leaving the space open and flexible within a green frame. The fluorescent lamps for Sentrum Scene marked the lines that were reinterpreted in Mot nord to serve as natural benches (that’s why there are no other benches as might be expected). The project was nominated to Oslo’s City Architecture Prize 2011 (Oslos bys arkitekturpris 2011). However in its current state, the square seems to be forgotten or somehow to have become less structured. It is most often filled with chaotic scooters, and the sculptural benches are in desperate need of cleaning and restoration (the light elements have been destroyed over time). Isn’t this ‘state of forgetting’ more a rule than exception? If we look at the photos taken just before the renovation, a similar ‘forgotten state’ emanates from a different period of time.

“Place is one of the trickiest words in the English language; a suitcase so overfilled one can never shut the lid. It carries the resonance of homestead, location, and open space in the city as well as a position in a social hierarchy.” 2

Public space, a specific kind of ‘place,’ is no less tricky. It can be defined simply as a property open to public use, but concerns key issues such as inclusion and exclusion for different groups of people under conditions of political-economic change, gentrification, urban redevelopment, corporatization, protest, and resistance. Public space has a role in shaping the realities of gender, race, sexuality, and (dis)ability, 3 and remains central to political and social life, as streets, squares, and parks are common places for protesting, socializing, and encountering difference. I would especially emphasize the latter here; encountering difference. And so, public spaces contribute to the reputation of cities for vibrancy and livability, and to the well-being of urban residents. 4 The role of public space received a new meaning and even more attention during the pandemic lockdowns, when suddenly – in many parts of the world – outdoor public spaces became the only alternatives to apartments where people could be and interact. The public space can also be approached from the angle of its functionality or purpose. It may sound obvious, but it is important to state it clearly; the main role of public space is to be public. This means to be open and accessible to people irrespective of their ability, race, ethnicity, religious views, gender, and last but not least, their economic status. Or – to put it differently – everyone should be able to enter a public space without the necessity of a commercial transaction.

There are many ways public space loses its openness and becomes either literally inaccessible or simply unwelcoming to such a degree that the potential of stopping by or spending time in the space – even if possible – is never actually utilized. Nowadays to say that the disappearance of public space is caused by privatization is at best a truism. 5

But what exactly is privatization? In the narrow sense, it means the sale of state-owned assets to individuals or corporations. However such a definition suggests that privatization can be simplified to a single example or act, which is misleading as privatization involves several related processes, favorable circumstances, and local and/or social acceptance or passivity. Furthermore, the processes leading to privatization are often more indirect and the whole change does not happen at once, but gradually in the name of ‘consumer preference’, upgrading, economic structures, logistics, temporary solutions and so on. Public spaces that are neglected – not well maintained – tend to land more easily into private hands, as often the surrounding local communities prefer something happening rather than having an unstructured park or blighted square in the neighborhood. Commodification is an important action of privatization; a practice – in the legal and actual state of things – in which the public space becomes an object that can be bought or sold. But before that happens, someone has to actually think about public place as a possible thing to be sold. The rules deciding what can be sold (or not) are to some extent legal, to some oscillate in between various economic interests, but sometimes such factors as symbolic, historic, cultural, and – literally – democratic play more important roles. 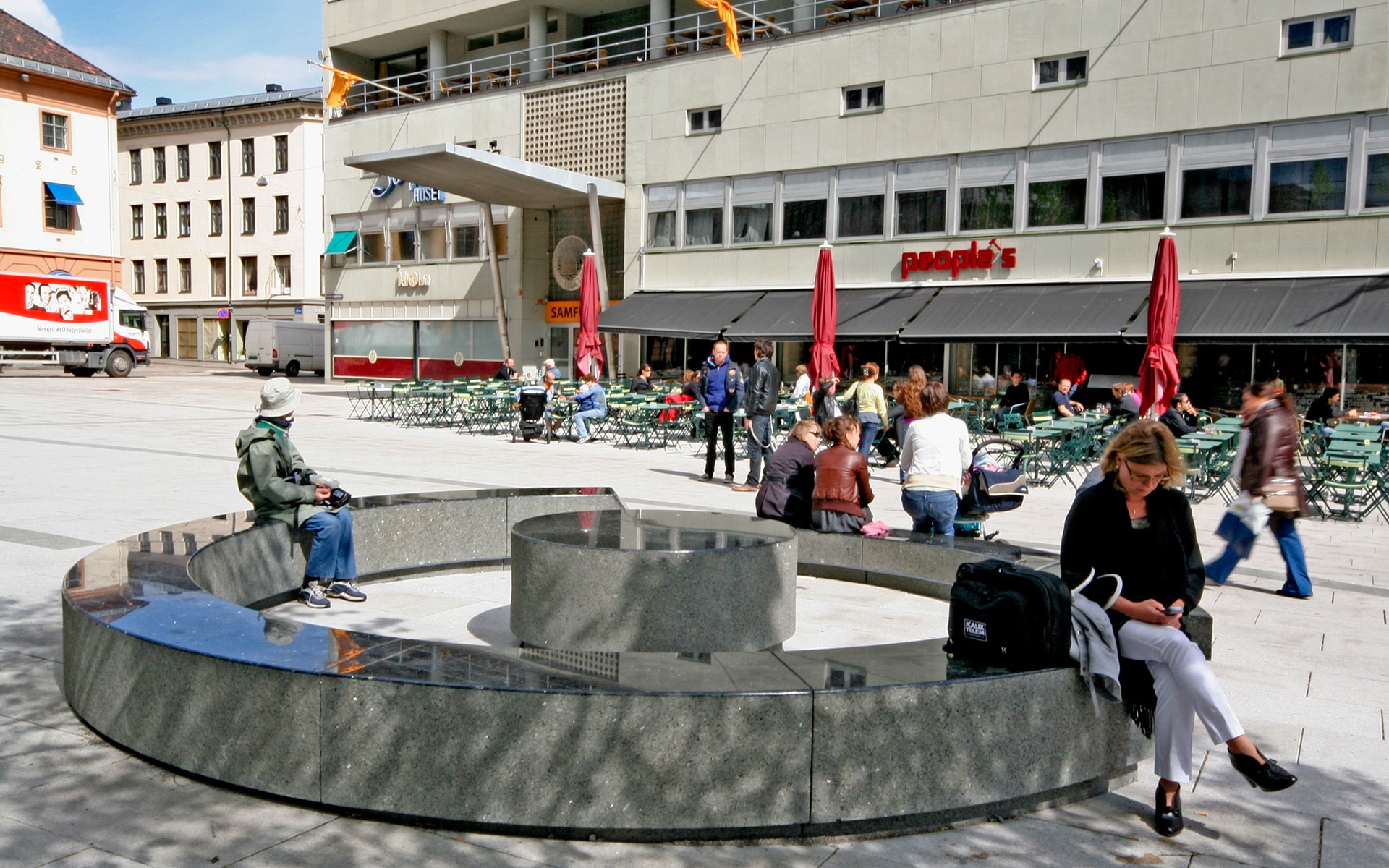 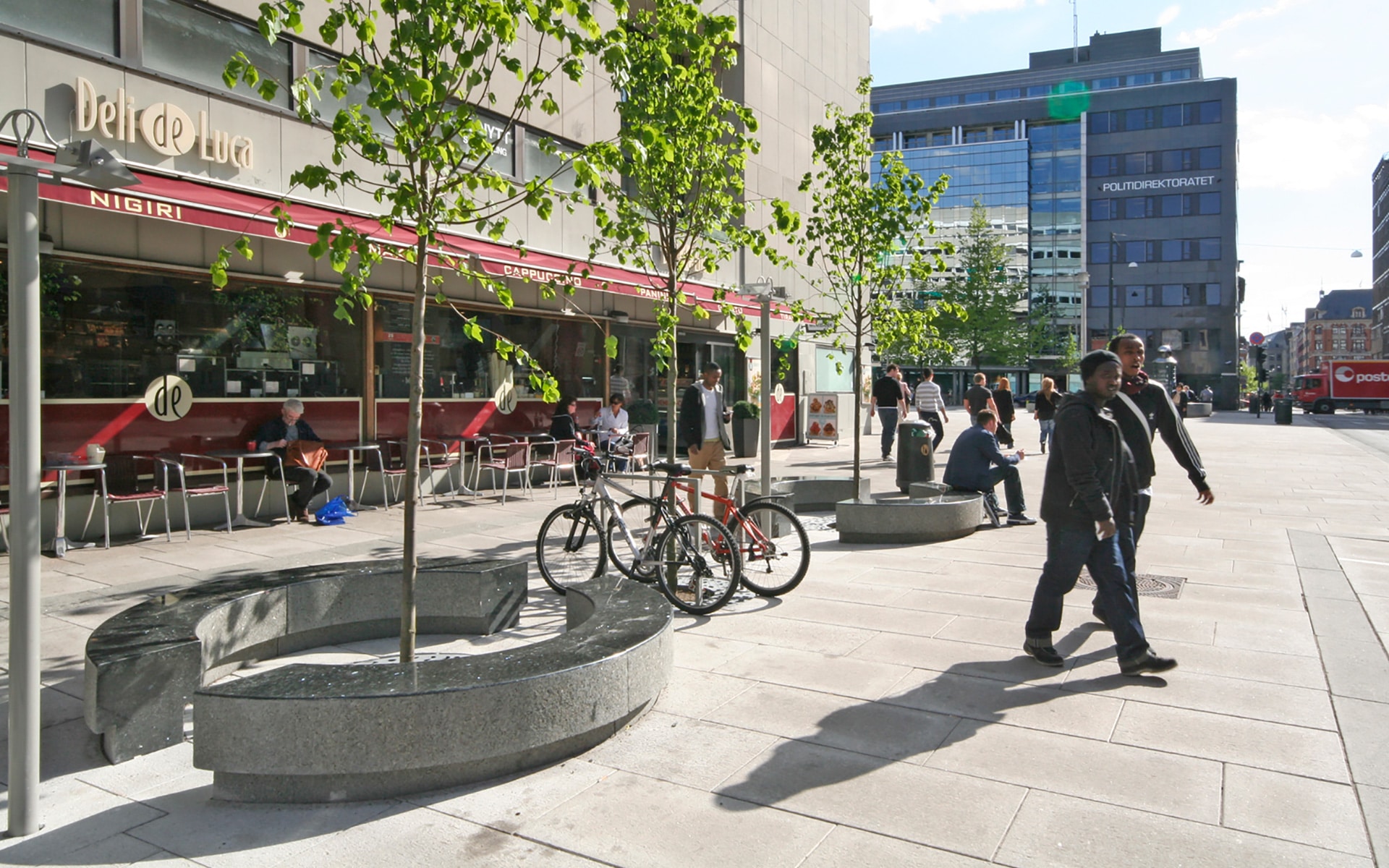 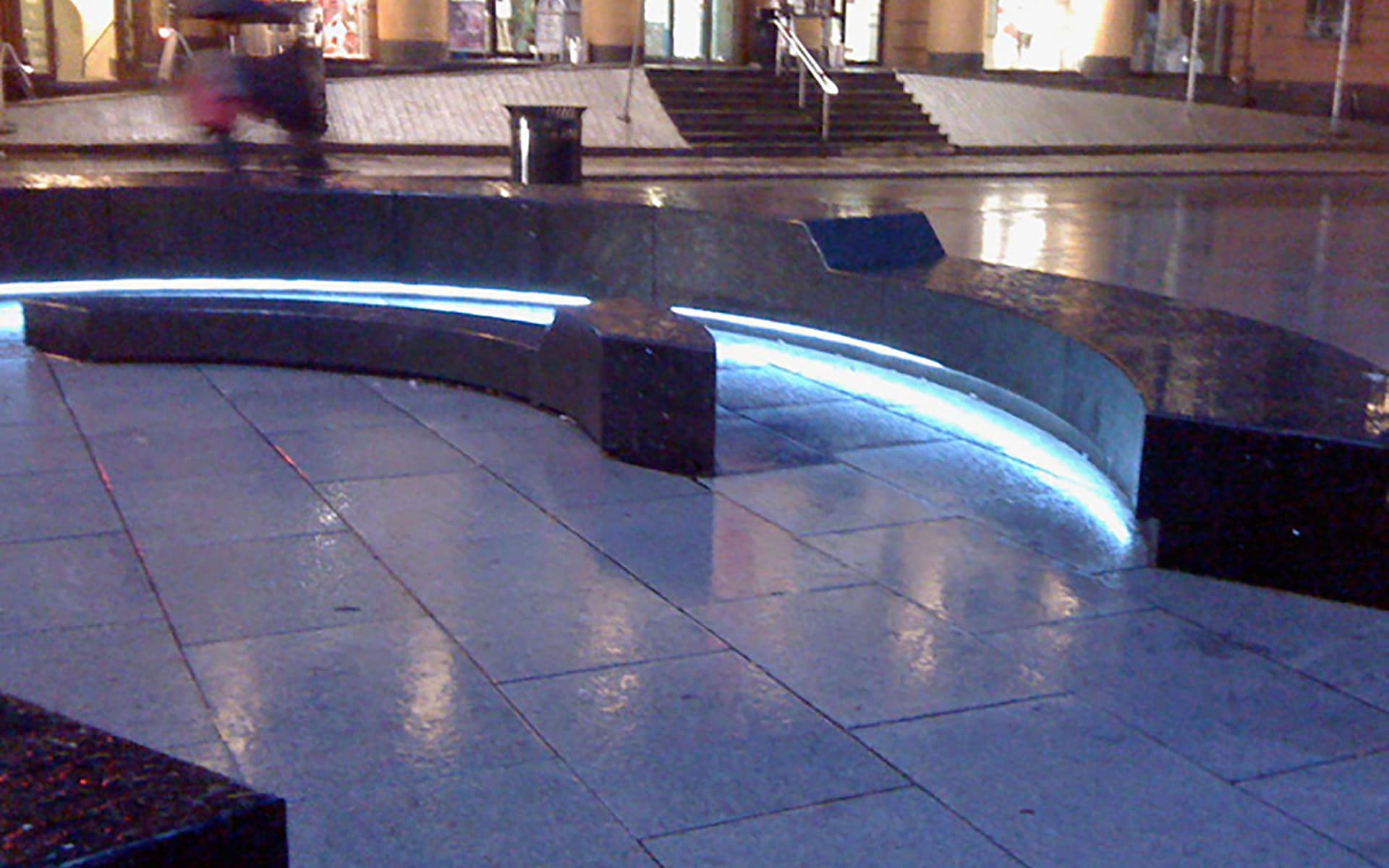 Precisely from those reasons, even if legal or economic reasons exist, it would be hard to imagine that Eidsvolls plass, 6 the main public square for free expression in Oslo and a symbol of political power in Norway, would ever be sold to a private business. Which brings up another important issue; not all privatization happens due to purely economic grounds or profitable aims. Some privatization exists solely for the sake of control, which can be expressed as much through money as through the symbolic gestures that communicate power.

Taking a critical look at demographic representation in public spaces, who is allowed to speak, and on which terms and conditions, can serve as a societal barometer for the current state of democratic values. That’s why public spaces owned or managed by the cities or state function as platforms to express a multitude of voices existing in a democratic society; from Love Parades, interest associations, political protests, sports and cultural events. Public spaces should also allow for people to simply be in the space without having any particular reason. In that sense public space reproduces social relations, as space is a social construct based on values and meanings affecting spatial practices and perceptions. 7 With this thought in mind, when we get to the topic of commercial actors in the public space, it might be easier to grasp why the issue of renting or selling gets more complicated.

As an example, imagine three food trucks serving alcohol, each set up for the summer in three different locations; Sukkerbiten, Aleksander Kiellands plass, or Arbeidersamfunnets plass. Though the practical setup is the same, a truck in each location would create completely different meanings, and different ways in which the truck’s presence would affect the neighborhood from formal concerns like aesthetics, to more practical ones such as people’s behavior, movements, and habits. Each of these locations has a different function, design elements, neighborhoods, busy hours, and surrounding architecture. Therefore, the decision whether those elements can function in a given place (or not), on what terms and conditions, and in which form must be made while thinking about the whole context of the given place. While moving a few of the restaurant tables to the street may add some life to the local surroundings, barricading the town square with tables and fences thus making the space completely inaccessible and destroying its functionality, aesthetics, and the way people move through it, is not the greatest idea. And that is precisely what happened at the Arbeidersamfunets plass in the summer of 2021, and is happening again now in 2022.

As Lefebre would perhaps comment on this situation, the quality of late capitalist space is often characterized by the creation of many similar, yet not the same, units as the commercialization becomes a marker itself; a norm to the extent that it becomes no longer visible or noticeable. This is how everyday life itself reproduces the structures of capitalism. Human perception has become so used to it that either ignores it, doesn’t notice a problem, or furthermore expects it. Why is this important? It is important because these places shape human perceptions of the norm and the expectations of future inhabitants. Thus we (society) loses not only material or measurable square meters, but also identity, meaning, future and history.

Zofia Cielatkowska is a philosopher and independent researcher, curator, and art critic. She holds a Ph.D. in Philosophy and works across the fields of visual culture, feminist art history, contemporary French thought, Norwegian contemporary art, and environmental humanities. She publishes in various art magazines (Kunstkritikk, Hyperallergic, Tique Art, etc.). Cielatkowska is a member of the International Association of Art Critics (AICA), International Association of Curators of Contemporary Art (IKT), and The Norwegian Critics’ Association (Norsk kritikerlag). She lives in Oslo, Norway. More at: https://zofiacielatkowska.com

Love, Art and a Walk in the City