This month Canadian artist Sky Glabush presents A Window is Also a Door, the artist's first exhibition in Norway, on view at Prosjektrom Normanns from September 24 – October 16, 2016. The exhibition consists solely of a series of hand-woven objects that function somewhere between tapestry, painting and woven rugs. Below, CAS Editor Astrid Helen Windingstad provides personal notations on the artworks. 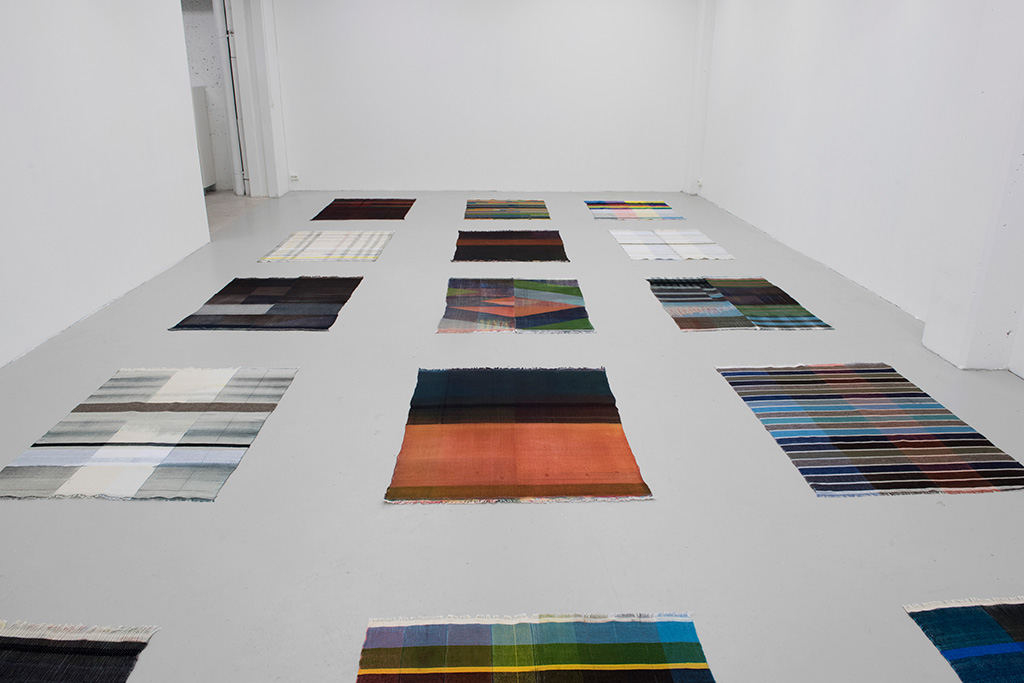 The entire floor at Prosjektrom Normanns is covered with 15 hand-woven rugs or carpets, each covering approximately one square meter each. They are placed systematically in a grid pattern with just enough room for a person to walk between. I immediately associate them with tablecloths my aunt uses on the dining table at home. What look like carpets or fabrics at first glance turns out to be impressive paintings, drawing parallels between textile arts and the woven surface of the canvas and pointing to the very fine line between definitions. Glabush works intuitively in a variety of media including painting, drawing, sculpture, ceramic and printmaking, but continually revolves around themes such as identity and spiritual dimensions from an intellectual standpoint. This exhibition consists solely of canvases that he created thread by thread and then painted, dyed, or otherwise manipulated. In the pamphlet for the exhibition, the artist himself writes:

but seen as objects they become stopped

moving from something transparent to something static:

A window to a door

Glabush elaborates further as he talks about the exhibition, and refers to the quattrocento painting of 15th century Italy. At that time one saw painting as a window into our physical wold. The painting was considered perfect when it was an imitation of the real world. As abstract paintings on the floor in this exhibition, they are also objects that can take on different contexts. Glabush compares them with doors; behind the door, anything can appear. In the context of this gallery space, it may be interpreted in such a way that these works do not necessarily belong solely in the category of object, but rather flow into several labels like painting, carpet, cloth, mat. The energetic colours of abstract, systematic patterns run the full colour-spectrum and create a vivid atmosphere in the project room’s white cube that creates a modernist impression. Thin threads of cotton, linen and wool are woven together in various proportions, and the weaving technique is not mastered all that well – but that seems to be beside the point. The weaving is skewed and holed in several places, but these errors create character and lend a rustic feeling to the artwork. I find myself wondering what it would be like to see the works displayed in a more “airy” arrangement; the canvases are so thin that light could easily pass through, which is not the impression given when arranged on the floor. 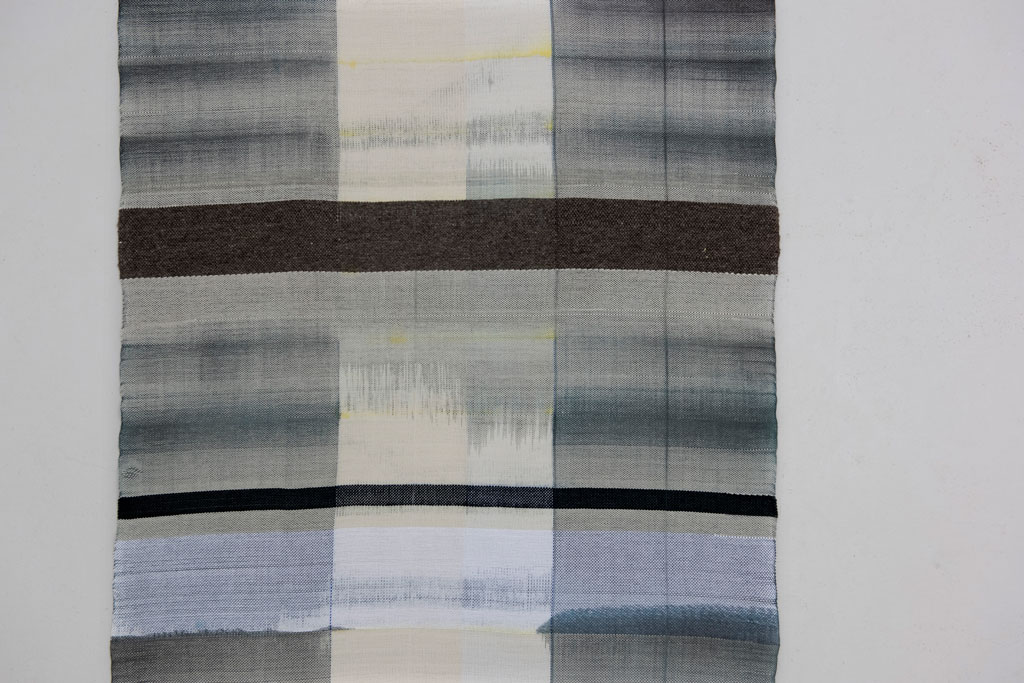 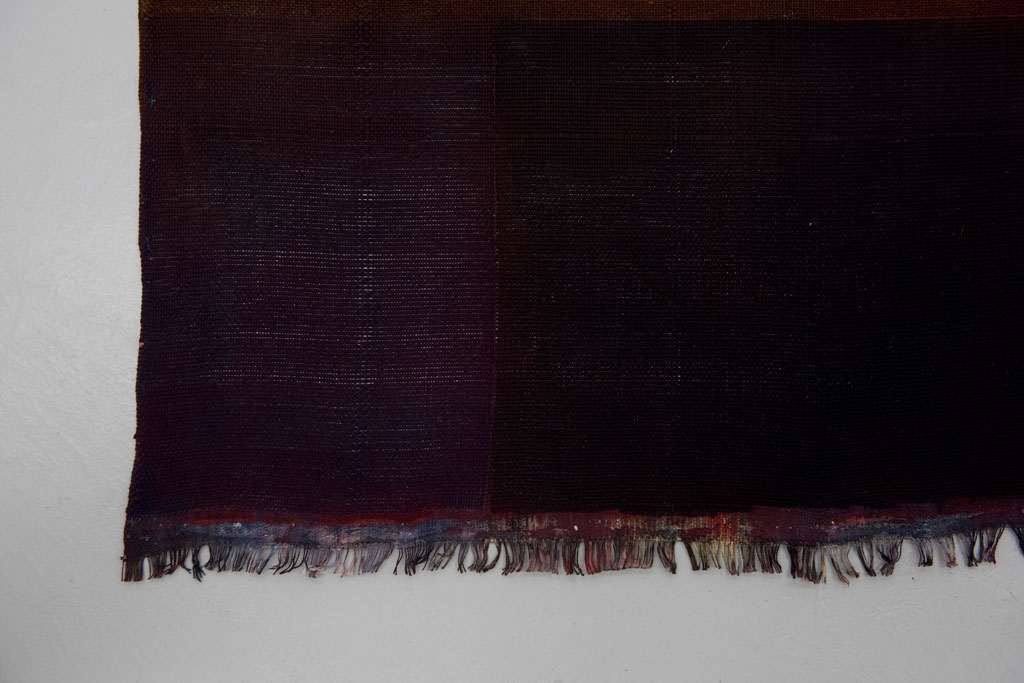 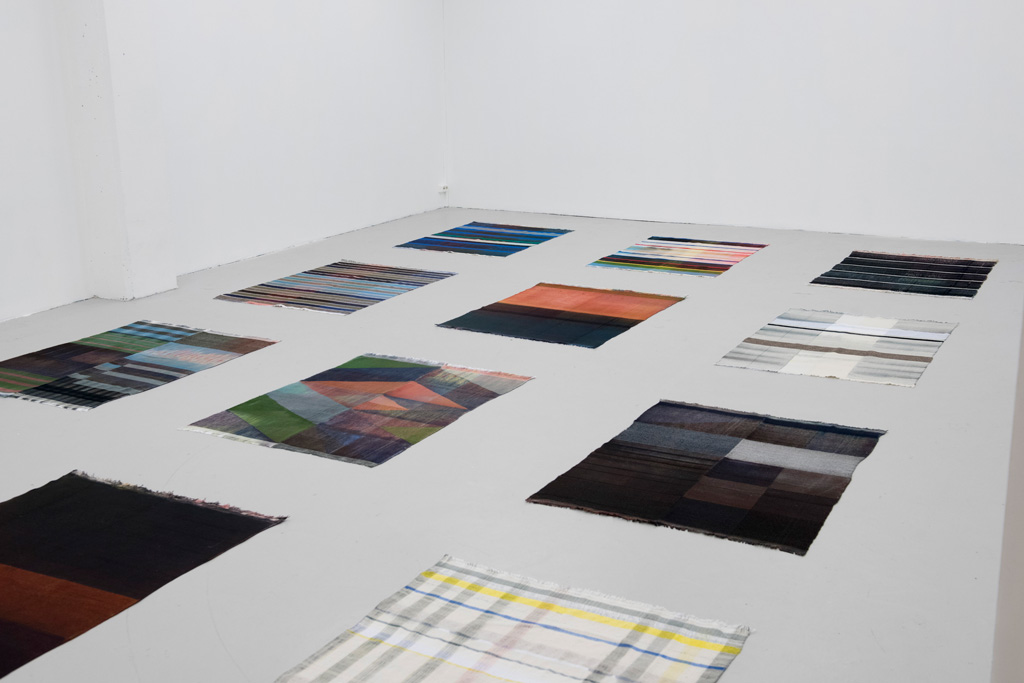 It is impossible for me not to mention the Norwegian tapestry artist Frida Hansen (1855 – 1931) in this context. A pioneer in tapestry composition, Hansen is known for a transparent weaving technique for which she was granted a patent. The method uses weft on the open warp threads. The fields where these vertical warp threads can be seen let the light through and the fabric is perceived as transparent. Hansen’s designs were heavily inspired by the art of her contemporaries and have a characteristic Art Nouveau touch. She firmly believed that the textile should not be a woven painting, but rather should have its own style, it’s own terminology. Glabush’s work is exactly what Hansen did not want her work to be – woven paintings.

However, as mentioned previously, the artworks emerge as different types of objects depending on usage. They can also be carpets to eat, sleep or pray on, leading me to think of crafts and craftsmanship. I doubt that Glabush would see his work as art crafts and neither do I, but when the boundaries for what a work may be are removed, it is natural that the work can exist in many different contexts and categories. This allows the exhibition to escape a strong modernist touch, but his search for identity appears in many different ways. As woven paintings and carpets, his works also contain a spiritual dimension. Glabush’s spiritual motivations could certainly come from his interest in Eastern religions, especially the Bahá’í faith. This exhibition also has a domestic touch, and connections can be made to the time the artist spent as a child on Native American reservations in the US. Textile production is a highly-regarded art form among many indigenous people groups, through which traditions, histories, and even narratives of colonialism and cultural appropriation can be traced.

The weaving process is quite ritualistic and meditative work, and one cannot ignore the Mark Rothko references in at least two of the woven paintings. Rothko believed that one should not connect works of art to anything specific in the physical world because it is in conflict with the sublime idea of the universal “spirit of myth.” Colours for him was a gateway to another reality, and he believed that the viewer could attain a religious experience in front of his paintings. Glabush’s woven paintings refer both to the physical world through the many perspectives from which they can be viewed while at the same time, they have a religious context as the carpets can also be experienced as prayer rugs, blankets, or shawls. Arranged on the floor in Prosjektrom Normanns, they create a sublime atmosphere that follows me long after visiting the exhibition.