Norwegian artist Lars Morell recently collaborated with Prosjektrom Normanns in Stavanger to present the exhibition Maid's Medium, a grid-like installation of painted panels and dangling sculptural silhouettes. The works combine to create an immersive environment that casts a somber and mysterious mood over the space its audiences. CAS Editor Heather Jones speaks with Morell and Prosjektrom Normanns member Elin Melberg, who curated the exhibition. 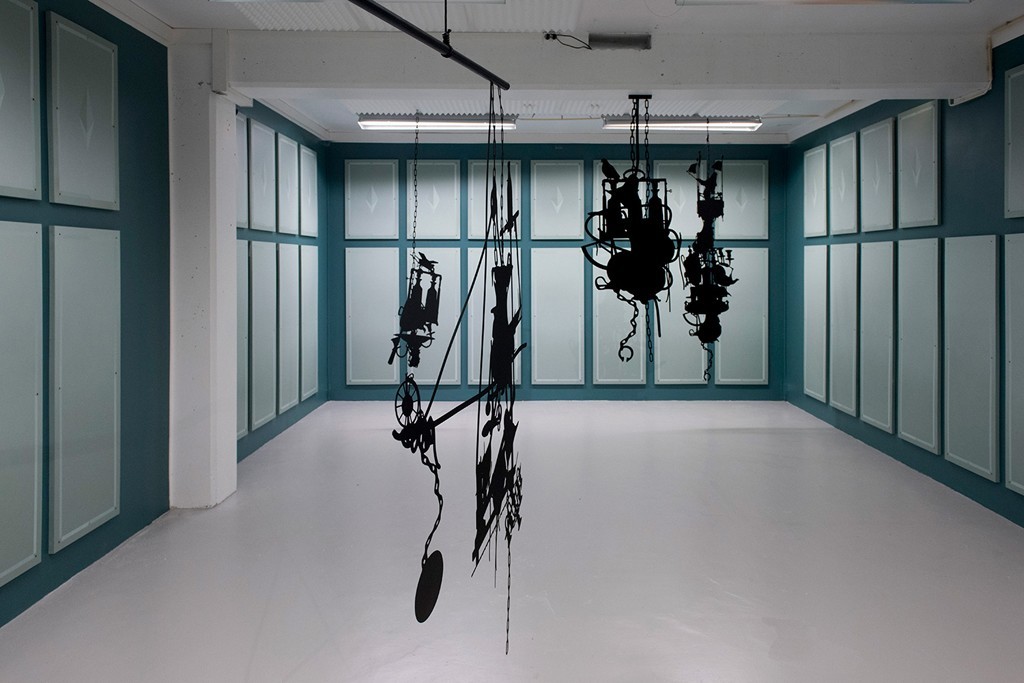 Heather Jones: Hi Elin and Lars! Thanks to both of you for agreeing to a brief conversation about your work and the recent exhibition Maid’s Medium. I’d like to start with a a basic question: Lars and Elin, could you tell us a little bit about how you met and came to work together for the exhibition of Lars’ work at Prosjektrom Normanns?

Elin Melberg: Lars and I met many years ago, around 2008, as visiting tutors at Kunstskolen i Rogaland. Since then we have kept in touch and developed a friendship as colleagues. Although our artistic practices are quite different, we have always had interesting and honest conversations about our individual work, the artist’s role and issues concerning every day life as an artist.

When I joined Prosjektrom Normanns in May of 2013, I knew I wanted to do a project with Lars at some point. I love the fact that he is as professional as he is in his way of working. His technical skills are impressive, he is particularly concerned with aesthetics and visuals, and he expertly deals with this through his melancholic fascination of the old illusionist’s world.

Lars has never previously done an exhibition in the Stavanger-region, which I find very strange. This made me want to work with him even more. Lars is in an interesting international process at the moment, and knowing how busy he is, I was very flattered and honored that he wanted to do this exhibition at Normanns.

HJ: Lars, your work has been described as mystical and theatrical in nature, and nostalgic and perhaps even melancholy in spirit. What is the role of theater and magic in your work as a whole, and specifically in the exhibition Maid’s Medium at Prosjektrom Normanns?

Lars Morell: At some point I became more aware of the whole visit to an exhibition as part of the experience. Even if I go to a gallery that I have seen shows at twenty times before, I still like the idea that whatever show is on, and however neutral the white cube may be – the space has its own voice. This is a basic observation everyone has, but I think it started my interest in working with these kinds of installations. I often think of going to a museum or gallery as a theatre where you as a visitor move around the different shows or rooms as in different acts. I had seen photos from Normanns before, but had never seen the space. It’s an interesting entrance where you have to pass the always-good mood by those hanging out in the social area before you enter the exhibition space.

Visually and thematically the project is a dive through the era of entertainment, from the time when clairvoyants and jesters had gotten their top hats on performing from a stage rather than at a street corner. Myths were about to be busted, the occult unmasked. The project at Prosjektrom Normanns consists of rather complex and correlated material, full of anecdotes and fragments from a variety of sources. The obvious narrative is non-existent, which in turn allows for a more personal composition of elements. This has become my method of working. There can be props and a certain color palette from a film combined with anecdotes from an illusionist patent print. It’s a subjective rearrangement, and the elements I combine make sense for me. I have a collection of research…and out comes the shows.

HJ: This work, as much of your earlier work, utilizes tropes and visual language from the early 19th century, evoking a spectral quality in the installation. Things are simultaneously there and not there, true and untrue. Can you discuss concepts of illusion and deceit in your work? How do you see these 100-year old histories and narratives as relevant to contemporary art in 2015?

LM: Deceit was what caused the tension and led to the entertaining trials to disprove and unveil these seductive cheats – which makes the research interesting. For example the title, Maid’s Medium, is inspired by Leonora Piper, who held séances with William James (American doctor, psychologist and philosopher) who was impressed by some of the details he was given by her. However, it is said that a maid in the household of William James was friendly with a maid in Piper’s house and this may have been a source of information that Piper used for private details about James’ life.

I like to compare it; somehow I see similarities to how contemporary art functions today. Back then, as now, there was an ongoing debate about figuring out who actually has the ability, or who first came out with an idea or invention. The story refers to the beginning of something new, which I feel is always present in contemporary art. That is an entirely subjective comparison. It’s also a nice entrance to explain to people the work I make, and it’s quite simply the process I use to make it. So with this as an immediate entrance point for everyone, we can then dig further into each story or technique – depending on where the conversation leads. Regarding technique – I’m also interested in what the handcraft then as now signify for the finished result, and how it is used to achieve the desired aesthetic. In the process of materialising the idea, I try to be cognizant of what traces from 2015 are left behind (while using new tools like the water-jet and spray-gun). But the transition is always captivating.

EM: This varies really, and the result can be a combination of both processes. At Normanns, we normally challenge the artists to work on site, making the works for the exhibition there. Still, many of the artists bring in some pre-produced pieces, and then do some site-specific elements in the space, either site-specific as artworks or site-specific as content.

Personally, I can have a certain sketch of an installation project that a gallery wants, and I make it for a specific exhibition or project. On another note, I love spending a long time working freely and intuitively on different pieces in my studio, not knowing where they will show first. My personal work has a certain subject as a common denominator, making it possible to curate a selection of them into a space. I don’t normally have to know where my work is going, although I enjoy working site-specifically, and with my major sculptures and installations, I normally have a more detailed plan.

HJ: Elin, why did you and the co-organizers of Prosjektrom Normanns view Maid’s Medium as an important exhibition to have in Stavanger?

EM: First of all, we find Lars a very interesting artist. Second of all, we only invite artists or curators that have not previously done a major project in the Stavanger region. I was particulary curious to see how Lars would work with the space. We invite the artists to develop an exhibition on site, and to spend a lot of time in the room. It is always exciting for us and the audience to see how the space changes from project to project, and although every exhibition takes a lot of time and energy from both artists and us as organizers, it is well worth it.

Lars had experience from the tour he did in the north of Norway in 2010/11, where he developed several site-specific exhibitions over a limited time period with artists Anders Sletvold Moe and Josefine Lyche. This way of working was something he wanted to develop further at Prosjektrom Normanns.

Showing Morell’s perfect, painterly and tight installation immediately after Franklin Evans collectible, colorful, chaotic and abstract exhibition was also a valuable contrast that underlines our way of working at Prosjektrom Normanns, and makes the processes even more interesting.

HJ: Lars, was Maid’s Medium a project that you were already engaged in, or was this exhibition envisioned specifically for context of Prosjektrom Normanns?

LM: Maid’s Medium is made specifically for Prosjektrom Normanns. I have done similar installations before, like Elin just mentioned (Se kunst i Nord Norge). It was also inspiring that Elin encouraged me to go into dialogue with the space when she asked me to do a show there. I have also done some shows the last years where the single works are simply installed traditionally hung on a white wall, I don’t do installations every time — it has to be the right setting or space. At the same time I was also asked to make an installation for the gallery I work with in Rotterdam, Cinnnamon, which will open in January. So this is part 1 of 2 similar shows made and prepared simultaneously. 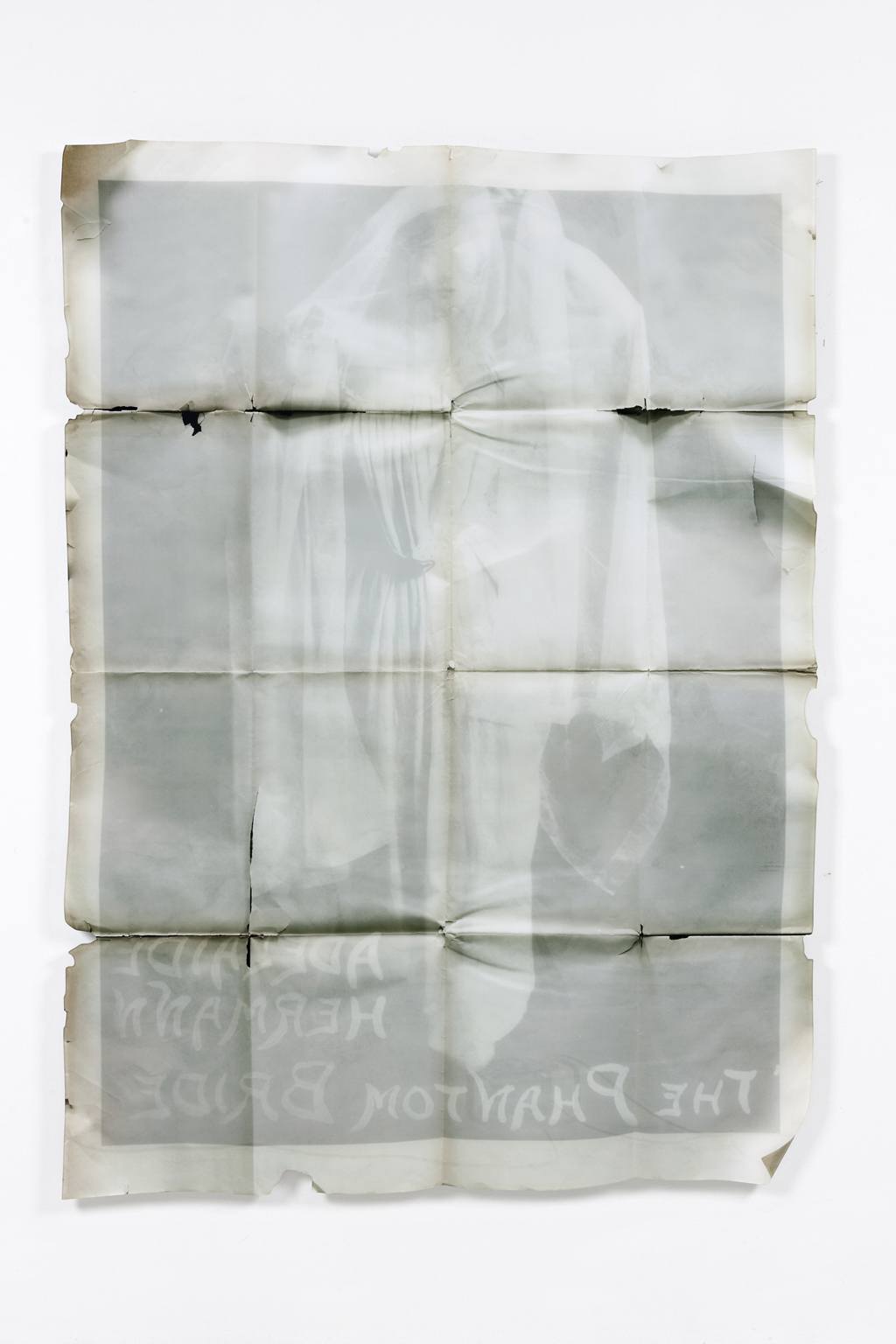 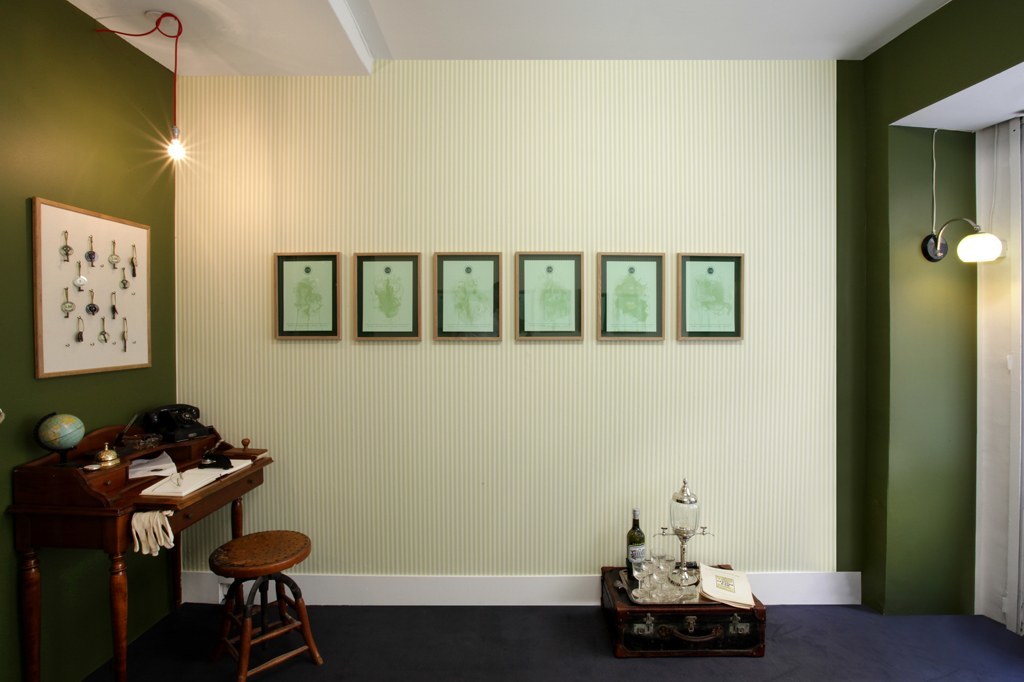 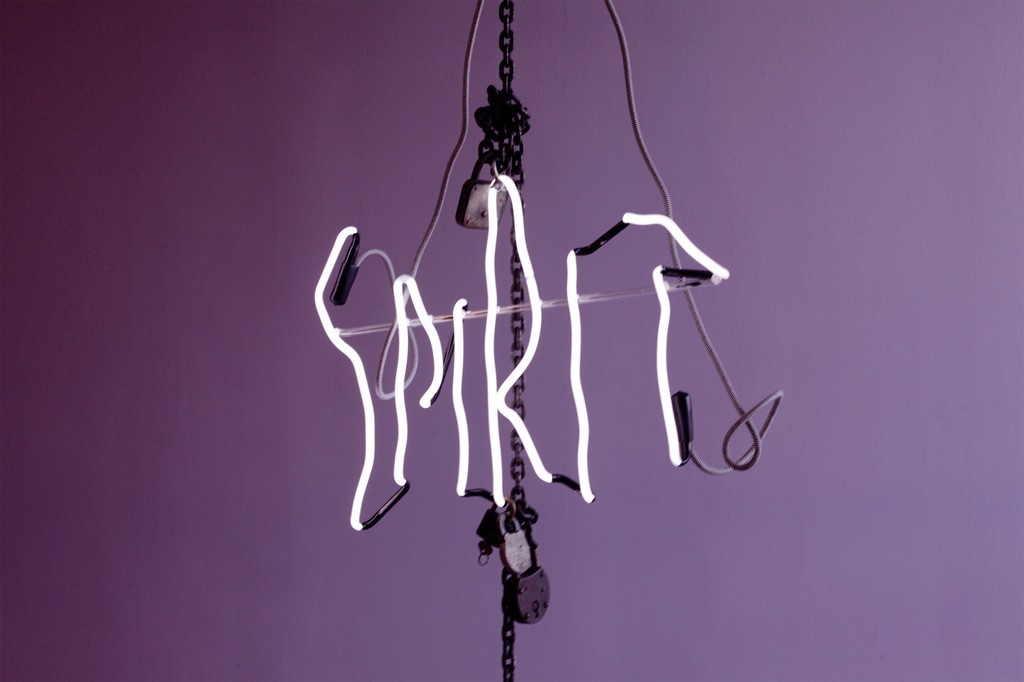 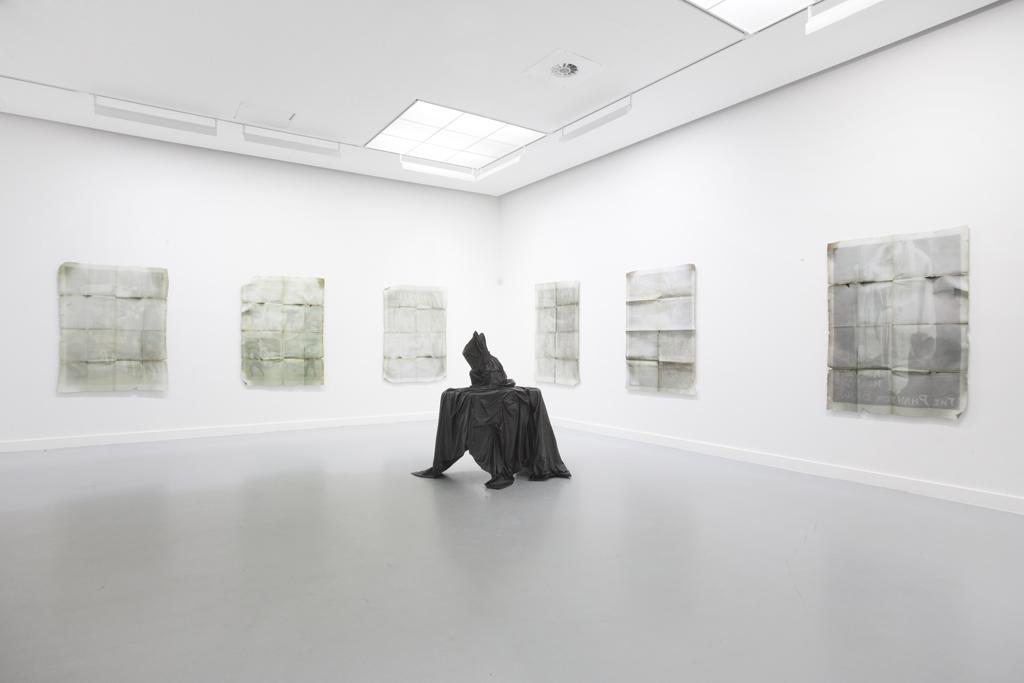 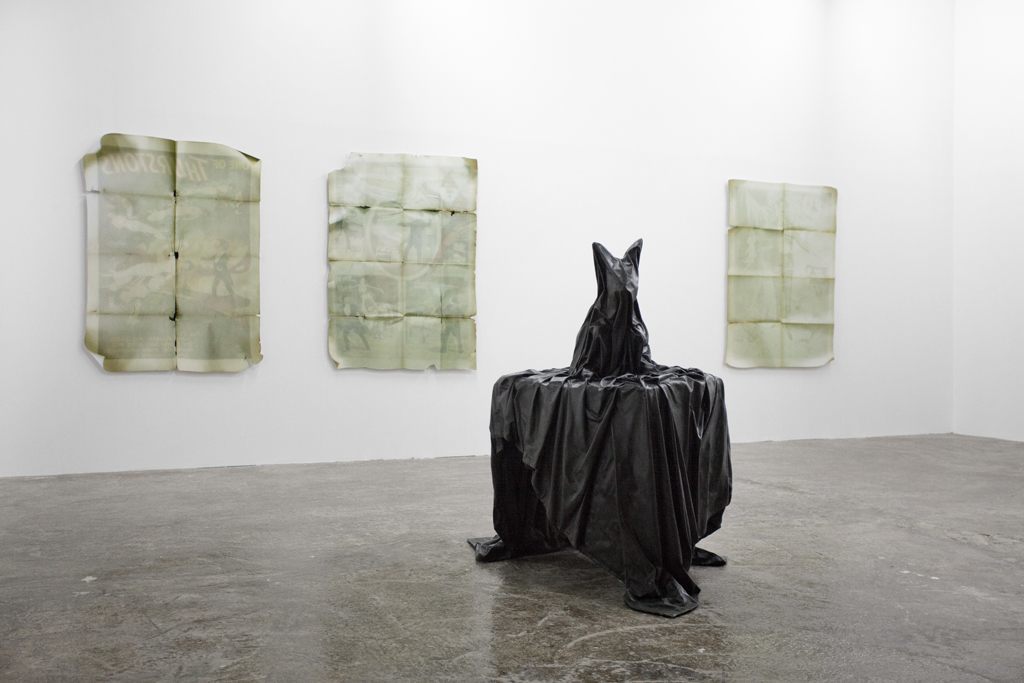 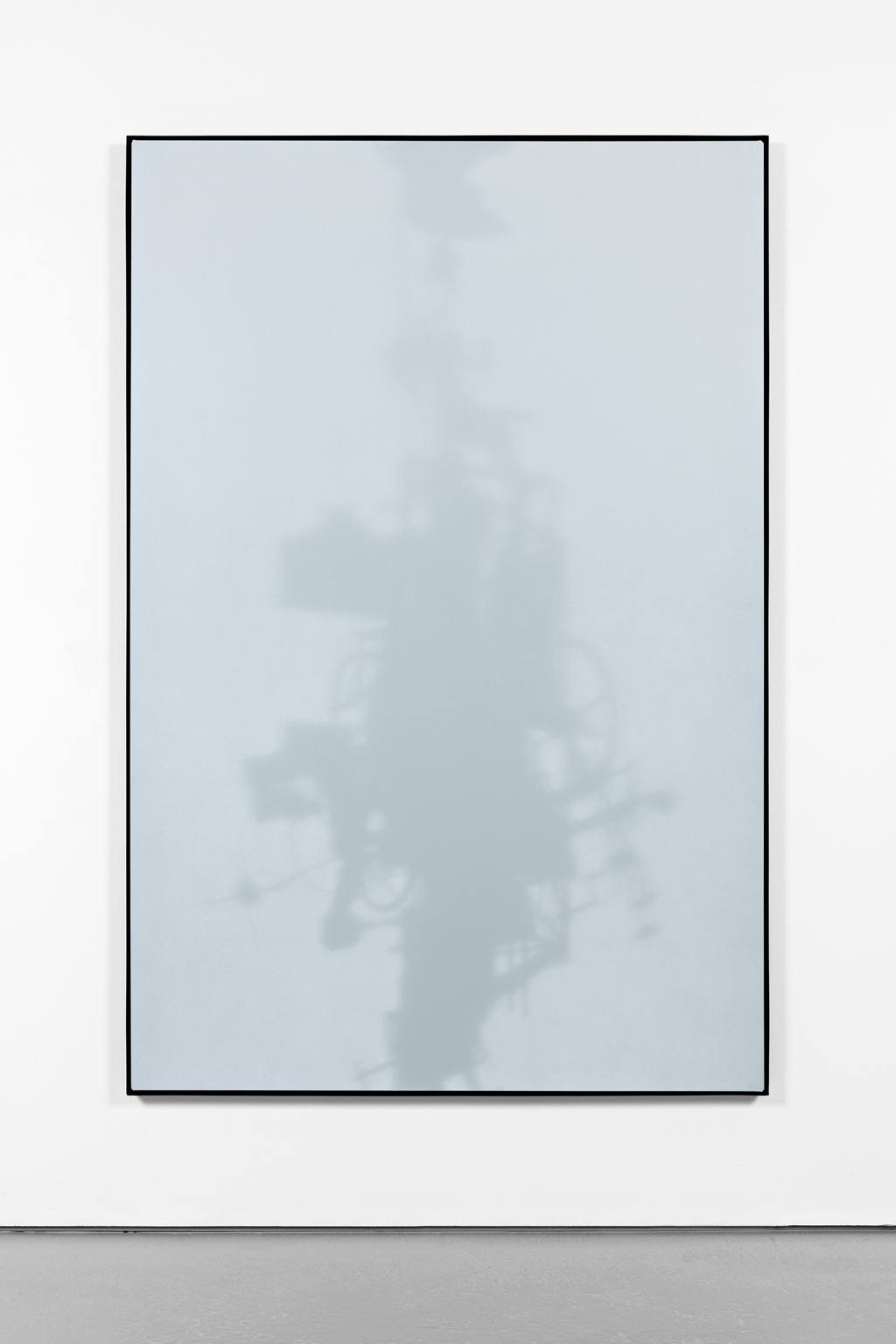 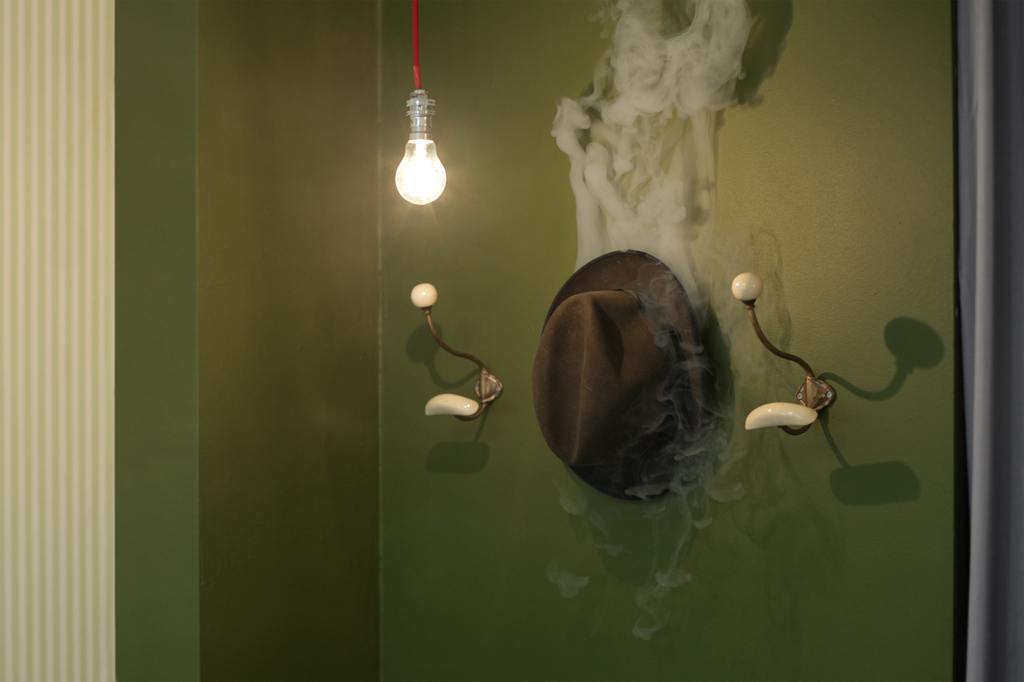 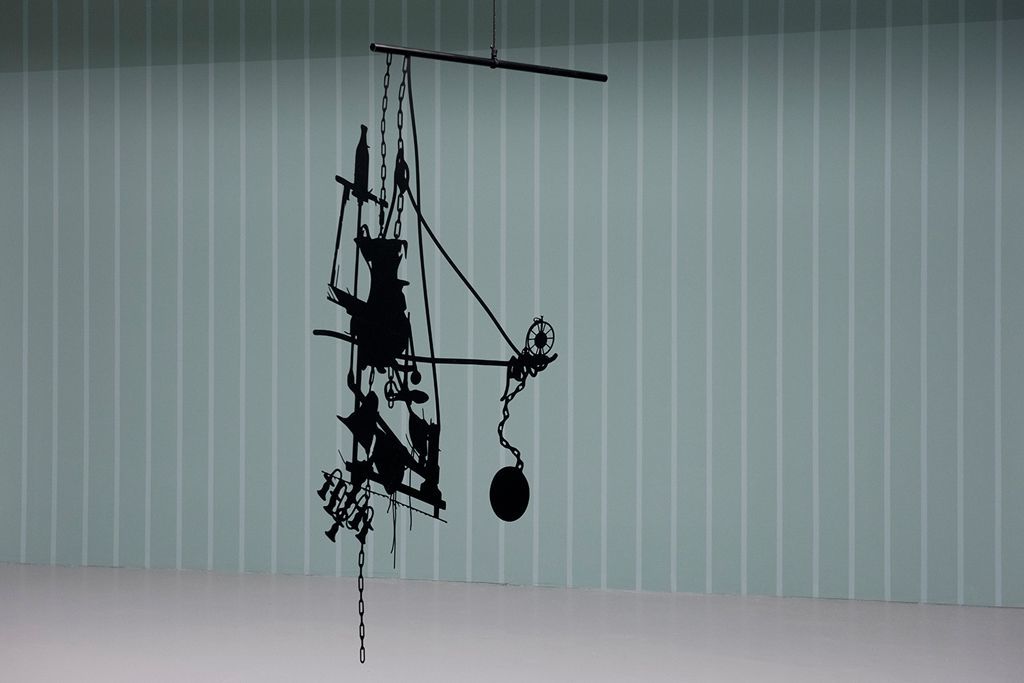