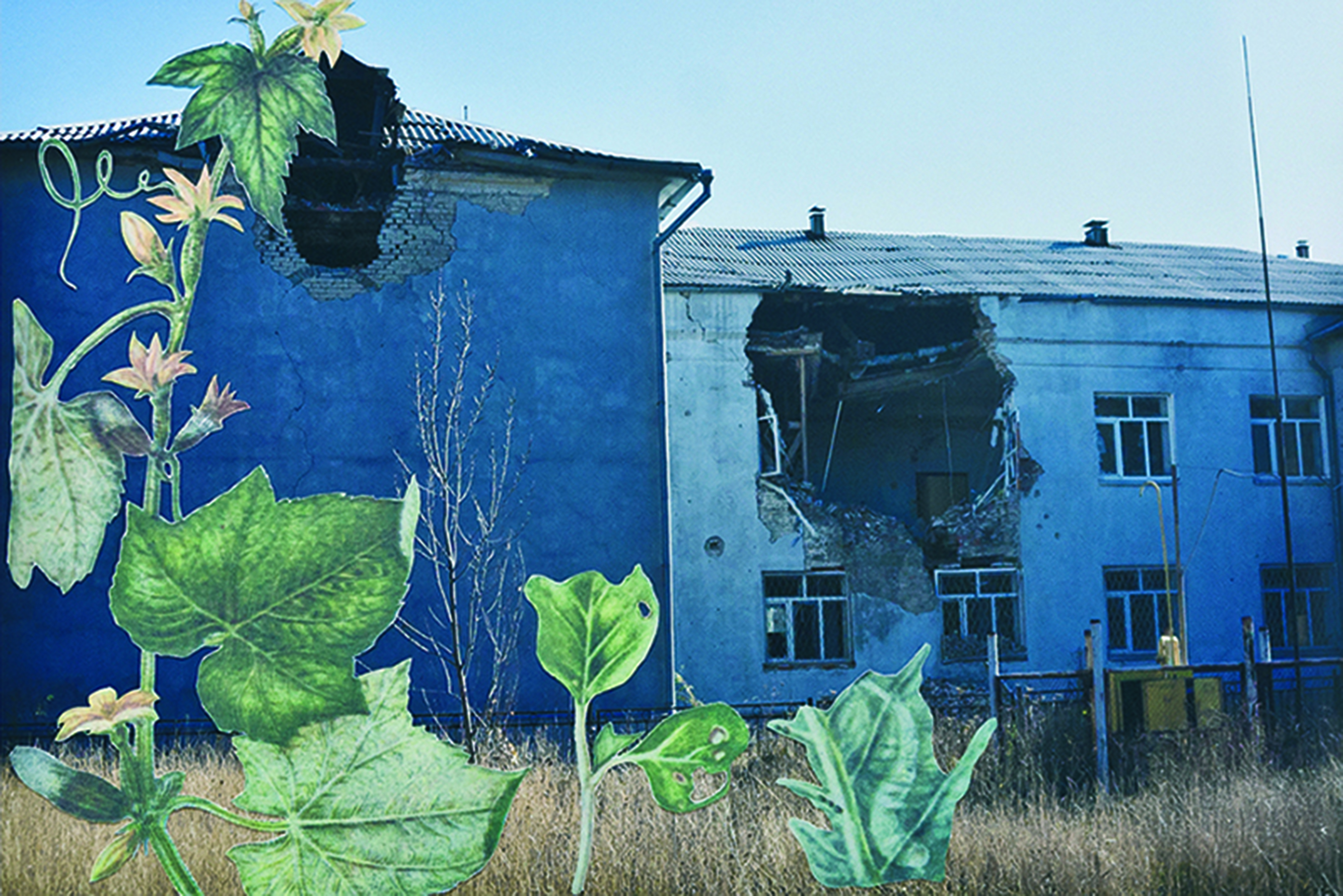 After the fall of the Soviet Union, Ukrainian art received a new pulse of life with the necessity to reconsider its place that lay no longer on the imperial periphery, but at the center of the culture of an independent country. The turmoil of the 1990s was characterized by the re-evaluation of the Soviet heritage and the reconciliation with the pre-Soviet history. Questions of identity and the new empowerment became central during this time.

The post-socialist artists’ searches for identity followed a difficult yet not untrodden path. They often relied on historical context, and also reacted to the then-occurring political and economic crisis. The work that Ukraine will present at the 2022 Venice Biennial, The Fountain of Exhaustion (1995) by Pavlo Makov, is very illustrative of the feeling of despair that characterized the 1990s. The economy was in a downfall, industries were closing, and the country was immersed in political confusion and despondency. The project was inspired by a breakdown of the water supply system in Kharkiv, the artist’s hometown in eastern Ukraine, but it speaks more broadly about the disillusionment and decay of the Ukrainian mid-1990s.

However, in the current context, this work gains new meaning and fresh relevance. The threat of exhaustion, both emotional and physical, during the war is enormous, and the city of Kharkiv has been the particular target of aggression. The city has been severely damaged by the Russian army, and many civilians have been brutally killed. But this project is not only about the current war in Ukraine; it is also about the entire world’s feeling of exhaustion, where compassion, hope, and resources come to the end, and disillusionment and inertia take their place.

Despite fatigue, the redistribution of water until the last drop disappears can also be seen as symbolic of solidarity – the possibility of organized Ukrainian society to absorb and redistribute the tensions, fears, hopes, and responsibility. The clear structure of leveling and communication can reflect on the collective power that helps to “seal” the system and to maintain balance even in difficult circumstances. Resilience and resistance until the last drop are now very representative of the collective effort of the Ukrainian society facing the aggressive war initiated by Russia. This vision gives a hopeful perspective on the ongoing situation in Ukraine and also references the decades of solidarity that followed the downfall of the 1990s that manifested through a series of participatory mass events.

For example, the first Ukrainian Maidan protests – the so-called “Orange Revolution” of 2004 – fueled public discussions on identity as they brought about the principle of collective solidarity. The works in Lesya Khomenko’s series Giants (2006 – today), which the artist started not long thereafter, establish a new human value as they depict individual human figures as if from the ground. This geometric perspective makes them monumental and important. The artist created a portrait of a society where new human value was emerging. Not accidentally, one of the first paintings in the series was of the artist’s grandmother, emphasizing the strength and the resilience of people from the older generations that saw various difficulties and atrocities throughout Ukraine’s uneasy twentieth-century history.

The topic of solidarity in Ukrainian society, as well as the reflection of it in Ukrainian art, re-emerged in the 2010s. 2013 brought major changes in worldview with the events of the Euromaidan protests and subsequent modifications in art production. The series by Vlada Ralko, Kyiv Diary (2013-14), depicted this important change in the public’s perception of their political and social significance. Energetic political protests then fostered participatory practices and resulted in the downfall of the pro-Russian government in early 2014. This process coincided with Russia’s occupation of Crimea and a part of Donbas. The artist metaphorically reinterpreted the events she witnessed in the revolutionary Kyiv: from the scarlet flowers of the Molotov cocktails in the hands of regular citizens (depicted as old women, in one of her drawings), to the public mourning of those who were killed during the protests.

The countdown for wartime art in Ukraine began in 2014. Ukrainian society experienced disappointment after the initial uplift of the Euromaidan protests, but the experience of collective assertions of consolidation against the war remained. The war, although contained in the occupied territories, was challenging for the entire Ukrainian society: the annexation of Crimea and the occupation of Donbas forced more than one and a half million people to leave their homes. These events did not remain unnoticed by the artists, and many of them personally experienced displacement and detachment from their families, provoked by the Russian occupation.

Crimea-born artist Maria Kulikovska created an installation Stardust (2018) that reflected on her desire to reunite with the territory from which she was forced to flee. It featured a map of Crimea made of soil and casts of her figure made of the same soil. The artist tried to reassure her connection to the homeland by mapping it with replicas of her body. Unable to return to the peninsula after annexation, she aimed to overcome her personal loss of Crimea by means of this symbolic placement of her figures on its territory. Kulikovska’s work also responds to questions of whether personal resistance and group resistance to the occupation are the same, and of how many people are needed to make a statement of opposition to the violence and the illegal annexation. Sometimes it takes only one artist to make the voices of the displaced heard.

Another project dedicated to the occupation and the violence of Russia is the series Protection of Plants (2014) by Nikita Kadan. The artist merged images of the ruins of shelled buildings with images of plants that visually cover them, in this way making a statement about growth from the ruins, invulnerability, and regeneration. At the same time, the work criticizes the plant-like inertness and immobility of the public response to the occupation of the territories in the east following the events of 2014. In this controversial project, the solidarity narrative falls apart, to be invoked with new energy by the art addressing the new traumatic events in Ukraine, with the beginning of the full-scale invasion by Russia.

In the last three weeks following the invasion, Ukrainian art has gone through a crisis of worldview. This reflects the metamorphosis experienced by a Ukrainian society immersed in a war of unbelievable aggression. Artistic projects have started to appear, and they focus now on the direct resistance to the unbelievable and cynic violence that Russia brought to the country of Ukraine. For example, the impromptu works by Kinder Album focus on the bodily experiences of the violence. In the drawing Bombing Civilians (2022), a human body is a building on fire. The artist mourns the numerous casualties of civilians and physical destruction caused by the Russian invasion, and she underlines the surreal feeling that the sudden outbreak of Russian aggression against Ukraine provokes. She compares a building to a suffering human body, representing the pain that Ukrainian society is experiencing from the shelling of the Ukrainian cities, while condemning the dishonest actions of Russia’s war against Ukrainian civilians, in which numerous innocents are dying.

The full realization of the scale of this tragedy will come with time, as a new sense of a world that has turned out to be crueler than any nightmare emerges. The traumatizing reality of the numerous casualties of civilians (including women and children), the destruction of previously flourishing towns, the expectation of sudden violent death at any moment … all of this informs the practices of Ukrainian artists today. These violent conditions and the resistance to its acceptance will continue to unfold in their works for years to come.

Svitlana Biedarieva is an art historian, artist, and curator. Her edited books include “Contemporary Ukrainian and Baltic Art: Political and Social Perspectives, 1991–2021” (ibidem Press 2021), “At the Front Line. Ukrainian Art, 2013–2019 (Mexico City: Editorial 17, 2020, co-edited with Hanna Deikun). Biedarieva’s papers have been published by October journal (MIT Press), Space and Culture (SAGE), Art Margins Online (MIT Press), and Revue Critique d’Art (University of Rennes 2), among other outlets. She obtained her PhD in History of Art from the Courtauld Institute of Art, University of London, in 2020.

The Saharoui as Figure and Ground