Tommaso Speretta is co-curator of "Every Moment Counts. AIDS and its Feelings" at Henie Onstad Kunstsenter and curator of the film program "I am/We are" at the Stavanger Art Museum. In the below text, Speretta offers a personal reflection on a short film by John Sanborn and Mary Perillo on Bill T. Jones’s performance "Untitled" (USA, 10 min., 1989). 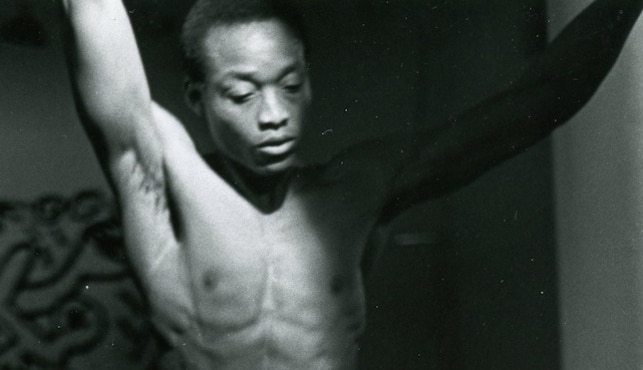 I came across the work of Bill T. Jones through Keith Haring via Tseng Kwong Chi. In 2008 I began researching the history of AIDS activism in America. I published a book in 2014 as a result of that research, but the work of Keith Haring never fully made its way into the text.  The space I had at my disposal was very limited, and so it was necessary to restrict my focus. Of the many folders with research material I had stored on my laptop, one read “AIDS-representation-black-body”. For some unknown reason I had saved some beautifully executed images of a naked man of color covered in Keith Haring’s typical primitive-like lines. When I looked at them again in 2015, I asked myself what these images had to do with AIDS. I was putting ideas together for a new project about AIDS and independent filmmaking. There must have been a link. I decided to investigate.

In the autumn of 1983 Haring was in London preparing a solo show at the Robert Fraser Gallery. Tseng Kwon Chi was present, having photo-documented Haring’s work and developing career since 1979. Dancer and choreographer Bill T. Jones was invited to pose, naked, and offer his body as a canvas for Haring’s drawings. Jones and his life partner and collaborator Arnie Zane would later extend an invitation to Haring to design scenography, including the poster and promotional cards, for Secret Pastures. A complex experimental ballet about politics, race, sexuality, and the power of economy, Secret Pastures debuted at the Brooklyn Academy of Music in November the following year. This was Haring’s first set design. A tent was placed at the center of the stage. It was covered in Haring’s outlined human figures, whose poses were echoed by the dancers dressed in Willi Smith’s costumes. Sadly, besides their creative force, something else linked the lives of these artists.

The Haring/Jones drawing performance took place on a Saturday morning in 1983 in an empty London studio. 2 Tseng Kwong Chi took exquisite pictures, some of which would end up in the exhibition at Robert Fraser Gallery. Arnie Zane filmed the four hour-long session. Retrospectively, I realized that the sensuous force of Jones’s corporeality in Chi’s stills carried the traces, unexpectedly and prophetically, of the prelude of a catharsis that was still to come. Chi’s images opened the doors to new discoveries. In 1989, six years after the photo shoot in London, Jones stood in front of John Sanborn and Mary Perillo’s camera, performing a lyrical dance to grieve the loss of Arnie, who had died the year before from AIDS-related lymphoma.

Untitled is indeed the first work that Jones choreographed after his partner’s death. I watched the video for the first in 2016. Untitled is not considered one of Jones’s major works. Thus, I was not surprised about how little academic writing existed about the work. A film archive in New York generously gave me access to the video. Originally produced for Alive from Off Center, a PBS’s arts anthology television series, the piece was later presented in theaters. The live version is four minutes longer than the original video. Jones, in this case, performs nude. The naked body fulfills the erotic remembrance of the lost partner as well as the act of self-eroticization, an element that is less predominant in the television adaptation. The derivation of Jones’s movements is rendered more evidently in the live performance – gestures are indeed partially built on Hand Dance, a solo that Zane performed in 1977 and that Jones revised in 1991 as a group work.

Untitled is a dense and touching work – Jones himself was HIV positive at the time. AIDS is never mentioned directly, yet alluded to, although not so openly. The piece alternates dance with Jones’s own speech – a powerful mix of anger, lament and melancholia encompassing the incommensurable size of his grief and the impossibility of healing. Jones is a distraught lover. Making sense of death is always the result of the incomprehensible incompleteness of life. However, is it perhaps exactly because of this incompleteness that we are able to still have hope, and eventually are able to love and be loved?

The video starts with Arnie Zane’s voice-over. He recounts a catastrophic dream – a bulldozer is pushing a pile of burning logs against him. Jones moves at the rhythm of a sort of a marching dance. Gestures are dramatically neat and sharp. Somehow ordinary and mechanical, they are powerfully expressive of Jones’s distress. He looks into the camera, grinding his teeth in anguish. His movements are in sync with the ethereal voice of Zane. Once the dream is over, Zane wakes up in fear. Jones walks straight towards the camera and starts a monologue. It sounds defiant and accusatory at the same time. “You said: A system in collapse is a system moving forward. Do you remember…” – a series of names of friends and events from the life they shared together follows.

Do you remember Tye, the little half-wit who cleaned our

Do you remember Lavonne Campbell, who said two young

men shouldn’t make such a commitment so early—they

didn’t know what they were doing?

Do you remember Keith? He loved those Puerto Rican boys.

You said, “A system in collapse is a system moving forward.”

In the background run ghostly portraits of those people whose names Jones is listing in front of the camera. The promise of death being the evolution, rather than the dissolution of the opportunity for life to move forward, has been sadly broken. Nothing, after death, seems forward-moving. He is stuck in the repetition of the same movements, looking for the way out. In this repetitive obsession and fetishized memories we, the viewers, are also called upon in the act of remembering. Perhaps he looks at us as he is in search of the missing Zane. We too become ghosts, an unearthly presence on the other side of the stage evoking the absence of the lost love.

Zane’s voice-over is back. This time, he reports on a tragedy that occurred during the construction of a house. He enters the scene as a holographic image. He executes a few movements. Jones takes over when Zane leaves off. And his fully danced meditation on loss, the memorial to his lover, begins. Regine Crespin sings Absence from Berlioz’s La Nuit d’ete. Jones’s disoriented dance is drenched in melancholy. The erotic sensuality of his muscled shirtless body is choreographed in melancholia too. From there, it moves in a vortex of roiling pain and desire at the same time. Shot from behind, Jones beats the sky with his right arm. He lingers in the emptiness of this lonesome space. He is lost. Lost in grief.

There doesn’t seem to be anyone around.

Do you remember Amsterdam, and the lights are playing, and all the places you can smoke all day long and have sex all night long?

Do you remember Man’s Country?

Do you remember St. Mark’s Baths?

Do you remember sex with strangers?

Do you remember audiences?

Do you remember the first time we heard the word “homoerotic”?

A collage of images of Jones and Zane animates the background. Slowly, Jones dresses in everyday clothes. This is his mourning outfit, with which he re-enters the real world. The chain of recounted events moves now into Zane’s death.

Do you remember Roosevelt Hospital?

Do you remember the cemetery?

Do you remember your mother ripping her blouse?

Do you remember the ambulance drivers who wouldn’t touch your body?

The performance ends. Jones pounds his chest with his right fist and silently disappears from the scene into the darkness. “A system in collapse is a system moving forward”, remains as a mantra in the mind of the viewer. I, the audience, am breathless too.

In Untitled, the universal threat and impact of the AIDS epidemic, although never mentioned, is made violently tangible and personal. AIDS is an incomprehensible entity, even more incomprehensible than death per se, and in the work, Jones struggles to reconnect to the soul and memory of the person he has lost. The private, inscrutable dimension of his own grief, the celebration of a mourning that resists its end, is turned into an artistic piece, the only thing, which still gives meaning to his life. But isn’t Jones’s cathartic ceremony more than an individual act of mourning? Is it not also an invitation to find a way to process the nostalgia and loss of our own beloved ones? What about myself, the audience? Sitting at my desk, I re-watched Untitled a long time after I had originally seen it. And I, the audience, am still breathless. A new song by Beach House plays in the other room. “If it hurts to love. You better do it anyway. If it hurts too much. Well, I loved you anyway.”

Tommaso Speretta is co-curator of Every Moment Counts. AIDS and its Feelings at Henie Onstad Kunstsenter in Oslo and curator of the film program I am/We are at the Stavanger Art Museum. Speretta is currently pursuing his PhD in Practice in Curating at the Zurich University of the Arts. Over the last decade, he has conducted research in the field of art history and queer theory in the specific context of the HIV/AIDS epidemic and authored the book “REBELS REBEL. AIDS, Art and Activism in New York, 1979–1989” (Ghent: MER. Paper Kunsthalle, 2014).

The Saharoui as Figure and Ground