In 2018, American writer Claudia La Rocco came to Stavanger to deliver a lecture and workshop on art writing. She returned in 2022 as a CAS Resident in Art Writing. The below text combines an audio reading of her original lecture with her more recent experiences and observations of the city and surrounding region. 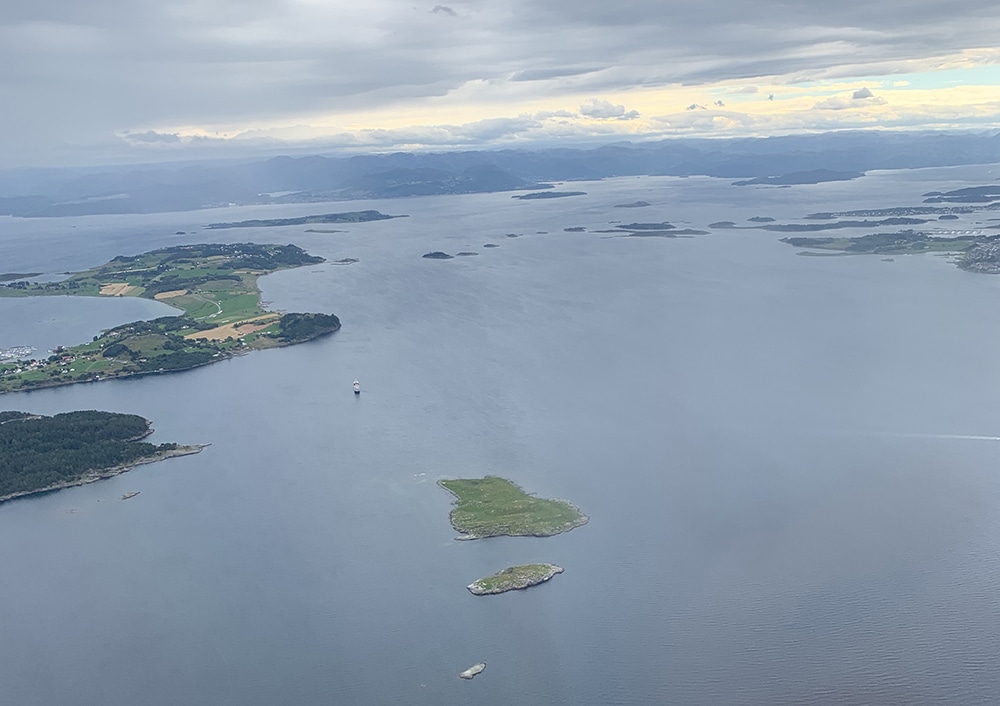 In 2018, I visited Norway for the second time, and as part of that trip I delivered a lecture in Stavanger. Lectures are funny creatures, at least for me. While they often draw from similar materials and themes, they are nonetheless time- and site-specific; I write them with particular people, places, and occasions in mind — so that it usually ends up I put an inordinate amount of effort into something destined to have a decidedly fleeting life. When Astrid Helen Windingstad suggested I might revisit the 2018 presentation for one of the two texts I am obligated to deliver as a 2022 writer in residence, I was intrigued and also perplexed. What to do with the abandoned child? I decided to record myself reading it while I was occupying Studio 17, an echoey white space that sits next to Rogaland Kunstsenter, where I originally gave the talk.

But then what? Or, rather, now what? It is easy to be alone in Norway, or so I’ve found so far. Though it wasn’t always easy to be alone in s17, another of those awkward public-private situations I seem continually drawn to in the abstract, only to be rather stymied in the actual. Similarly, having committed to writing in conversation with this four-year-old talk, I now wonder what it is I think I am doing, and for whom. One of the clichés in improvising is that, if you find yourself in an uncomfortable situation, a situation you don’t like — good. Stay there. Last night, Phillip and I were going over the rough edit of what will be the third animals & giraffes album, a recording of a concert we gave with Kyle Bruckmann, Alexandra Buschman-Román, and Adriana Camacho just forty-eight hours after I returned to Oakland from Stavanger. I was, as usual, having difficulty ignoring certain parts in the recording when I said something dumb, or my voice sounded weird. “Don’t worry about moments that you don’t like,” Phillip said. “They’re just moments.”

Clichés exist for a reason. This is the meta-cliché, the cliché to end all clichés. Except that clichés don’t end, that’s their point. Anyway, repetition is a beautiful thing. At the a&g performance, which took place at the great San Francisco bookstore Medicine for Nightmares, I was mostly free improvising. But I did have a few materials with me, things I pulled from occasionally. One of them was Miserable, a book by Samuel Brzeski, my fellow 2022 CAS resident. The book begins from a fragment of Sam Riviere’s poem “Miserable I hope you do too,” rewriting and recombining the poem page after page after page — very similar to how I work with text, whether my own or other people’s, in a&g. I have been reading Miserable since Samuel gifted me a copy, and the opening line, “a face becomes more beautiful,” made it into the performance in various ways, along with my evening fjord swims with Marte Danielsen Jølbo, the spooky and delicious experience of descending slippery rock into cold, dark water that seems, that may be, depthless.

A tunnel that connects an island to the mainland, rendering it no longer an island in some profound, and profoundly deflating way, is itself a creature of the deep. Arnhild Sunnanå drove me and Margrethe Aanestad out to the ex-island where she grew up. On Mosterøy we visited the Utstein Monastery, where Arnhild had curated a show of Margrethe’s work, Silent Metamorphosis; in a note about the show she quotes the poet Friedrich von Schiller: “On the horizon, yellow and blue meet between the sky and the earth. Sometimes a culmination arises in the sky, and creates purple. When this occurs and if we are receptive, we might experience a similar revelation within ourselves.”

Arnhild talked of running all over the island, of sun-bathing in the grassy indentations of Viking ruins, tromping around the windswept lighthouse, and being reprimanded for playing around the dangerous wreckage of the abbot’s house at Utstein. “This was my kingdom,” she said with a quiet, pleasing laugh. The abbot’s house would eventually be renovated and house Silent Metamorphosis. Might a tunnel also be a silent metamorphosis? Or the slow rise of the Norwegian land post-glaciers? If you stand on the deck of a ferry as it cruises up the Lysefjord and look out past the boat’s wake, you’ll see jellyfish pulsing brightly through the darkness, keeping their own time.

of the midnight sun

all over the horizon, the water
spilling out
like cod liver oil

billions of silver-scaled fish swarming to get in, get out; no-
body wants

I think what draws me to the idea of the public-private space, particularly when traveling, is that it creates a finite container for experience, a way to organize or focus what might otherwise overwhelm or slip away. I suppose it’s an architectural equivalent of a piece of writing, in a way — an inexact kind of way but, well, that’s writing.

Listening to this fifth section as I type, I am reminded how foolish I felt saying Knausgård, whose pronunciation I had meant to check, or maybe even had checked. And hearing his recollection that he had been so happy when his friend asked him what he was being paid for a prestigious writing gig, so that he could disclose this sum without appearing to brag, I am thinking of one of the few Norwegian words I can confidently pronounce, janteloven, which I learned this latest trip, though already I can’t remember how. As I understand it, janteloven is a social code of conduct in which one shouldn’t put oneself ahead of one’s society, a norm antithetical to the individualism woven into US culture. Discussing the concept in a car ride back from Hå Gamle Prestegard with Astrid and Heather Jones, I exclaimed to Astrid that Norwegians must find people from the States obnoxious, unbearable! She answered in the affirmative in her typical understated way, and I burst out laughing.

But why am I telling you all of this?

There are things that are no longer accurate in this lecture, and things I would say differently. I restrained myself from making any edits while reading (though as I recall I did correct one incorrect term, which now I can’t remember), even moving through stumbles as one would have to in a live reading. I remember when reading it in 2018 I felt so unsure, that it was not the “right” piece for that time and place. I was told after that this wasn’t the case, which might be true and might be kindness.

I am not so preoccupied now as I was then with how one can know a place, though the idea does still interest. I am remembering the bus Anna Ihle and I took to Sørmarka, where we tromped around in search of mushrooms (her) and birds (me). I am remembering how I wrote of Anna and Marte as my collaborators in the CAS application, and how that is true, but that it’s truer to say they are my friends; increasingly, this is the kind of knowing that interests me. I am grateful for the intimacy I have with both of them. That I have eaten meals in their apartments.

But why am I telling you all of this?

When you’re uncomfortable, stay there.

I’m not sure I agree with that quote. Or, rather, I think it’s incomplete. I am still thinking of the jellyfish in the fjord. In my memory they are a smoldering dull orange, at once vivid and blurred. On my shelves I have a book called Spineless: The Science of Jellyfish and the Art of Growing a Backbone, procured on one of my recent free little library forays. I haven’t read it yet and am not sure I will. I open to page 98 and read, “But many jellyfish aren’t flat; they are bulbous round things. Or are they? Sönke said that in a lot of ways, jellyfish are two-dimensional animals made three-dimensional by the colorless jelly they are named for.”

There are always jellyfish washing up on the shore in Maine, but I don’t ever recall encountering them when swimming in those waters. I’ve only been stung by a jellyfish once, when I was in Sydney, spending the day with my friend Lee Serle, a choreographer I collaborated with on a project there. It was my first time swimming in Australia. I still remember the short, intense shock of the attack, though that, too, feels at once vivid and blurred. We calmed our (my) nerves with aperol spritzes on the seashore.

“Co-existence: adjacent things colliding and departing, cycling through. Strange and intimate bodies: whose work is it anyway? A conversation between languages, pasts, and presents.”

Lee is very easy to be around, and he’s an inscrutable, quicksilver mover. I remember at the time being excited that we would continue working together. But this was in March 2020, and Sydney and Oakland are far away at the best of times. I had to leave Australia early to avoid being marooned by the global lockdown, and I remember amusing myself and probably no one else for months after with the line, “The last time I left my house I was in Australia.”

I’m not sure why I started collecting feathers this trip. I’m looking at one now: it’s smallish, about the length of my palm and pinky finger, a dull black on one side of the shaft and iridescent purple-green-black on the other, so I am guessing it belonged to a magpie. I used to collect a lot more language in my notebooks, it was my found object of choice. When did that change, and why? I think it has to do with growing older, becoming more settled as a writer; I have faith now that the words will be there when I need them.

That’s one explanation, an optimistic one — and it’s not untrue, but it might also be incomplete. I think there is also a diminution of curiosity. I still remember when I first began traveling as an adult, how gloriously different and exciting it was to be in new countries. Excitement comes less easily now.

I place one of the Norwegian stones in my mouth. It doesn’t taste of anything. The hardness of its smooth contours against my teeth is bracing, foreign in a way that makes me shiver.