Writer Claudia La Rocco came to Stavanger in September as one of the 2022 CAS Residents in Art Writing. The below text reflects on her time in the region, reveals some of her interactions during the residency, and captures her impressions of the landscape, cityscape, art, and society. 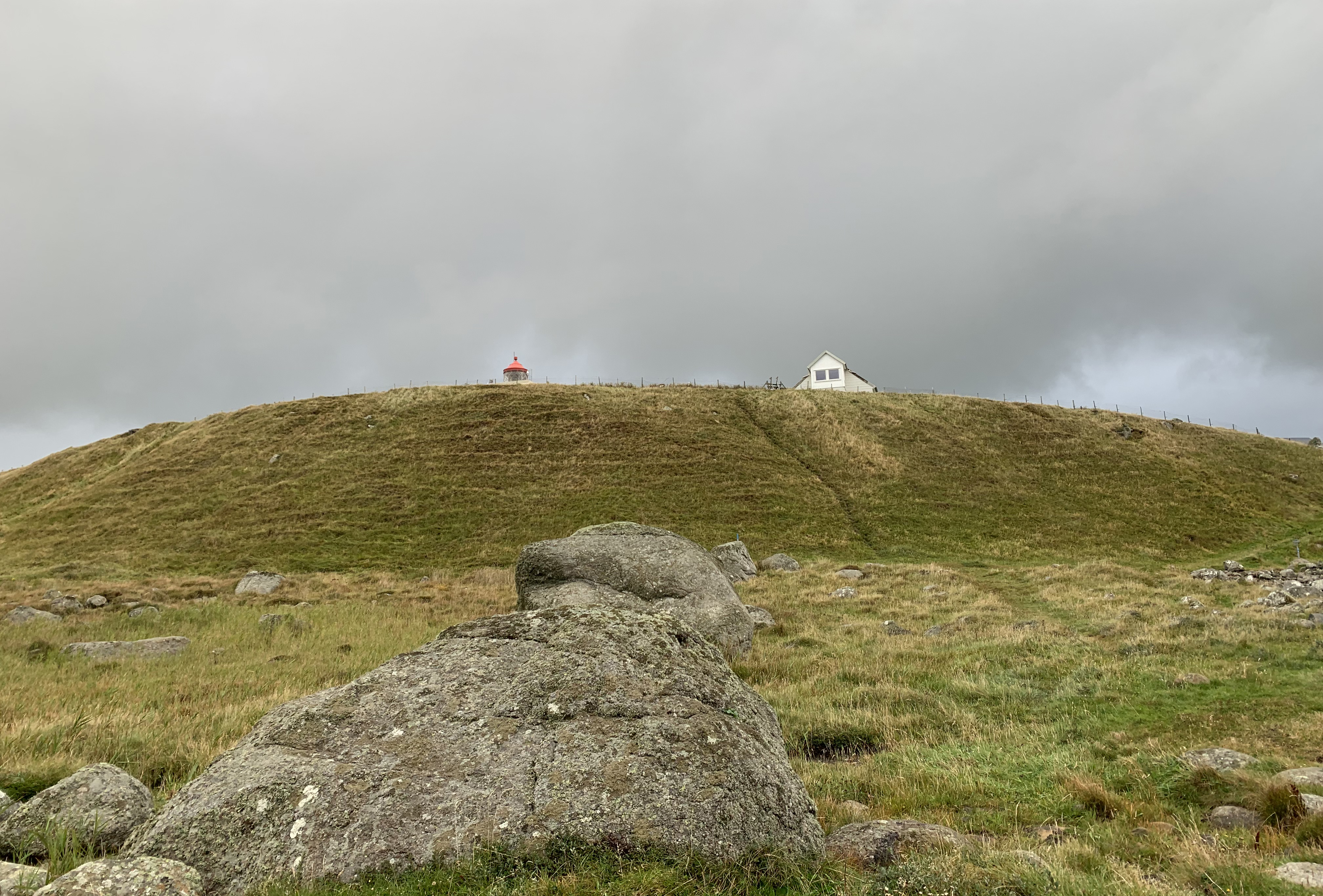 Looking back at Obrestad from sea level. All images: Claudia La Rocco.

I can find very little in English on the Twentieth Century Norwegian artist Andreas Bøe. I have the computer translate a Wikipedia page and get some information but who knows how accurate. A list of his “monumental works” includes “Stavanger Politikammer, mural painting, 1968,” which surely must be the work B. just showed to me and A., in the youth organization building at Nytorget 1, near Stavanger’s center. A squall is passing overhead as I write this, “this” being the initial handwritten notes for what you are now reading online, which I typed up and messed around with here, “here” being Oakland, California. The carving at the former politikammer (I wouldn’t describe it as a “mural painting,” but this is not my area of expertise [as evidenced by my editor noting that “bas-relief” is more appropriate than “carving”]) — and but so, the art confronts you from the building’s back wall as you walk into the lobby. It appears abstract, everything save its bottom third obscured by the staircase dominating the compact, central brick atrium. Warm overhead lighting gives way to a skylight as you ascend, and when you reach the top floor you see a pair of eyes, what seem like eyes. B. remarks on the importance of this gaze, for the police and the accused, perhaps guilty or perhaps innocent; to be watched. To be seen. 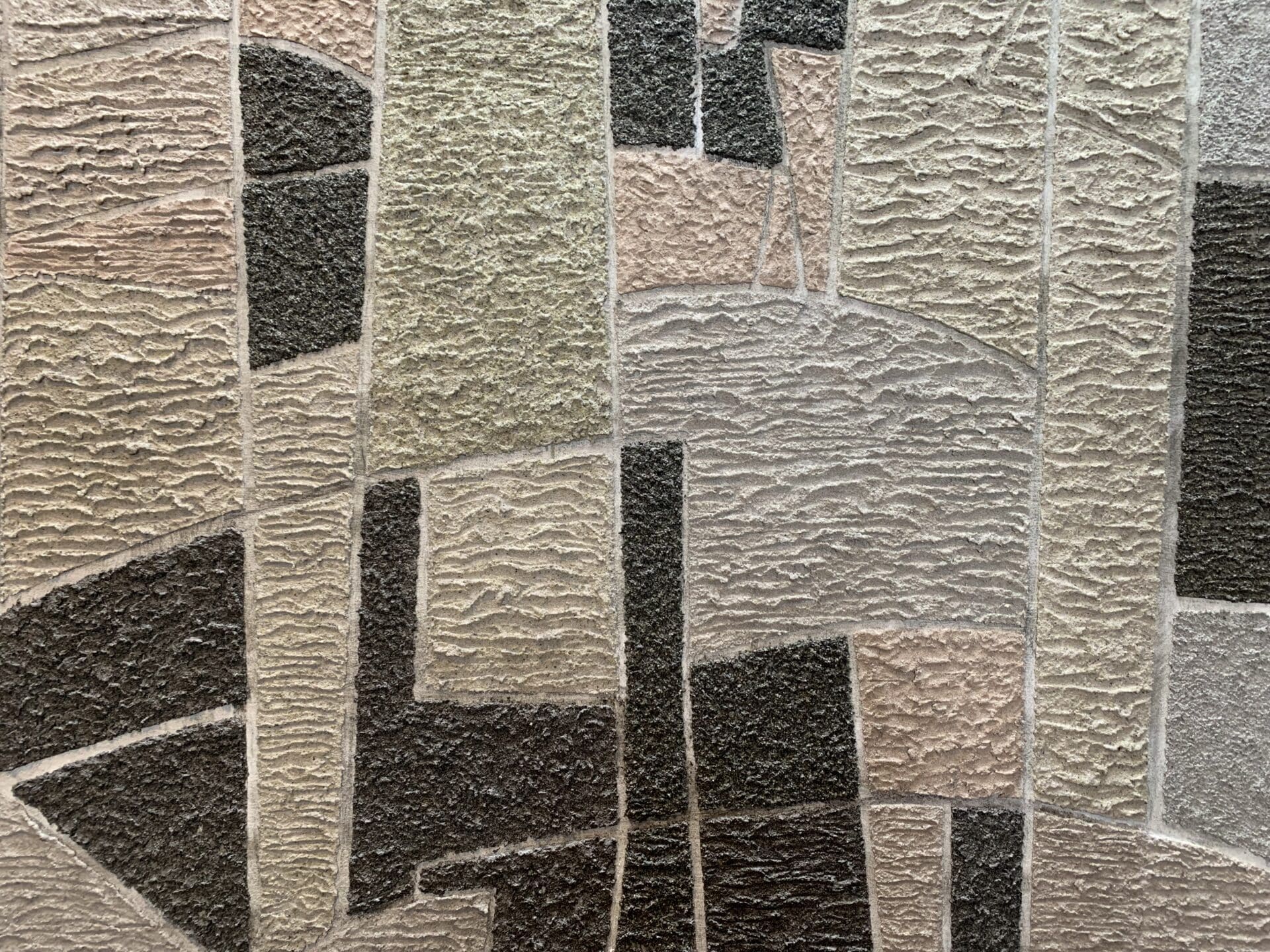 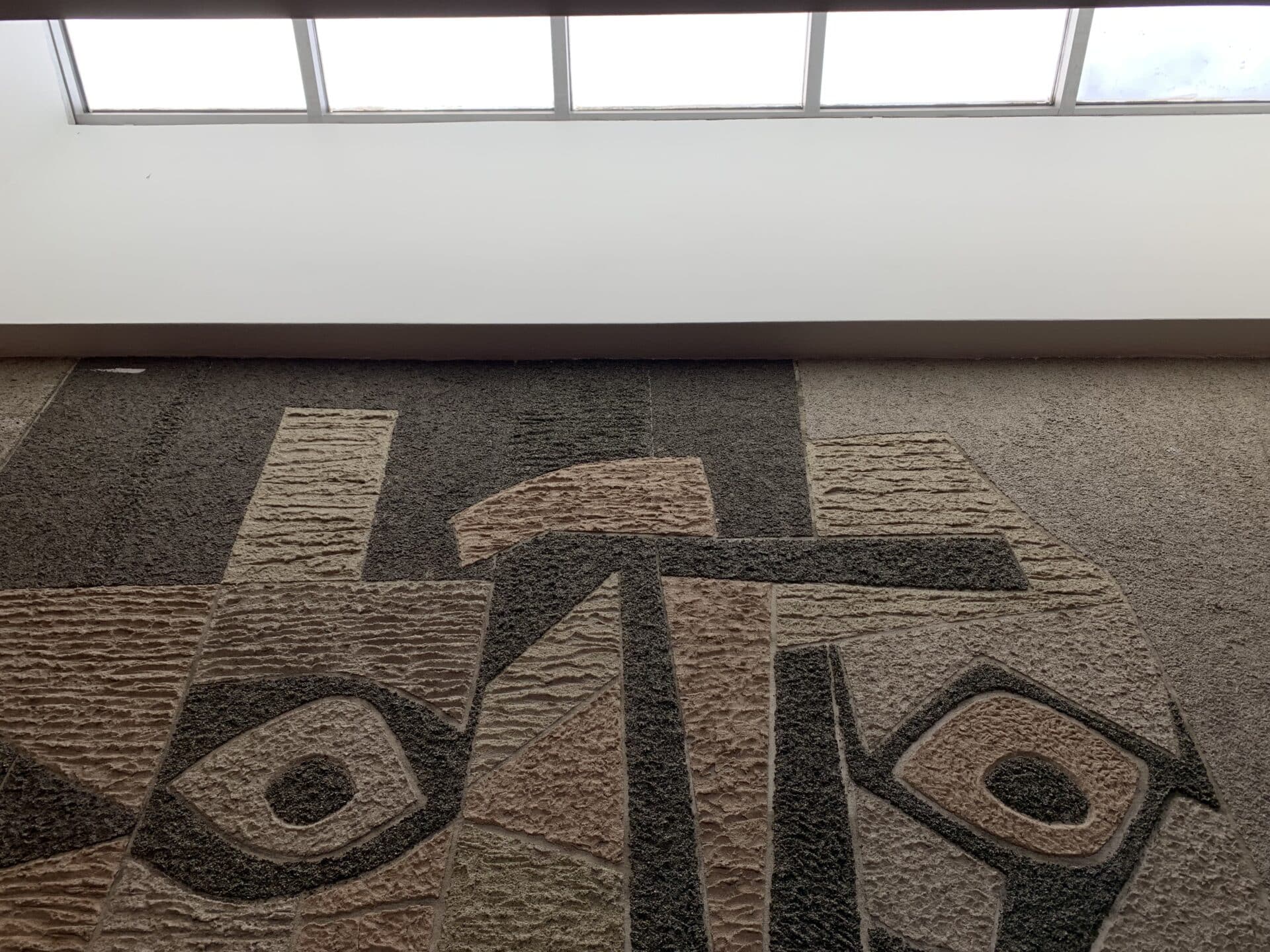 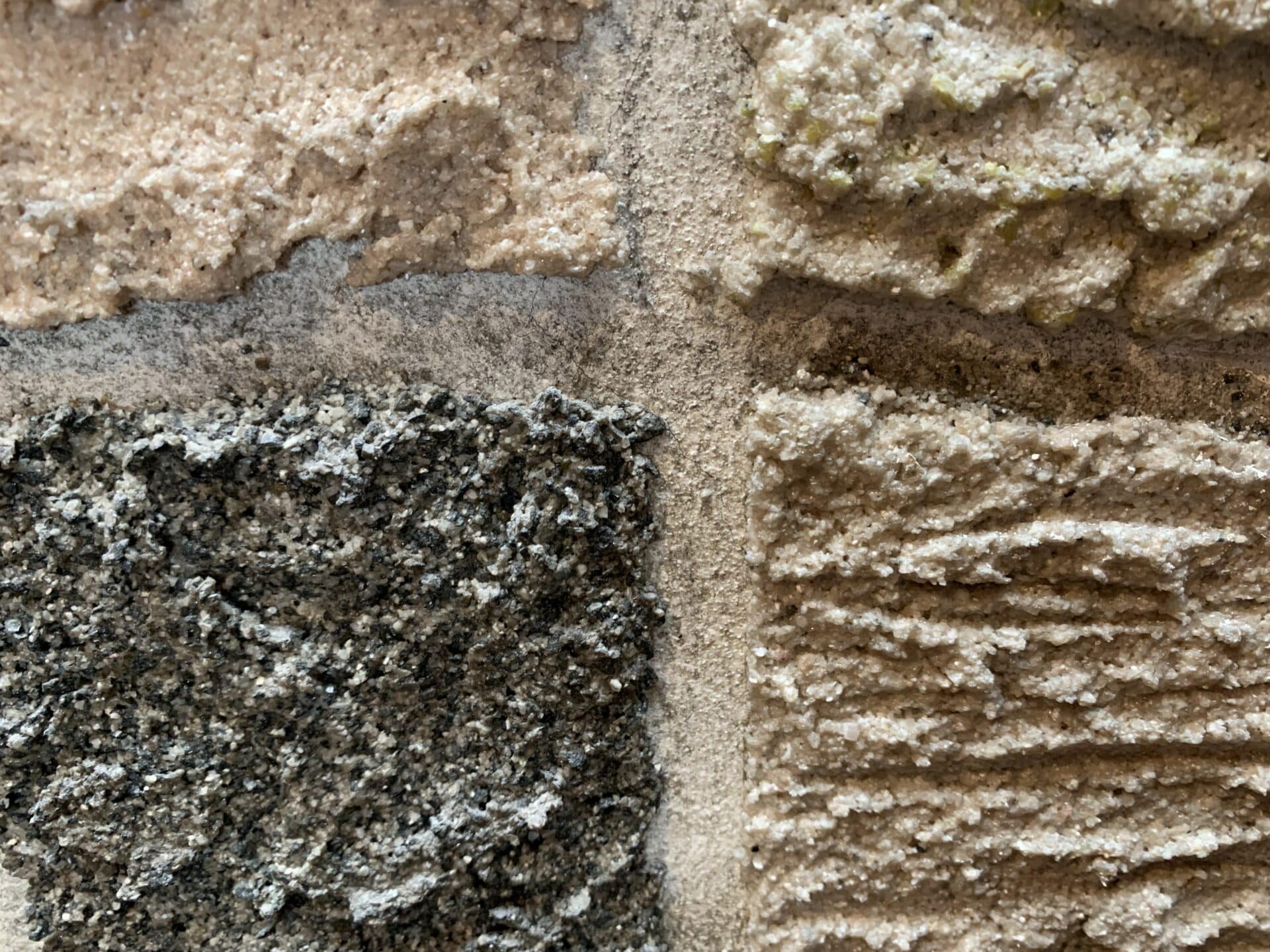 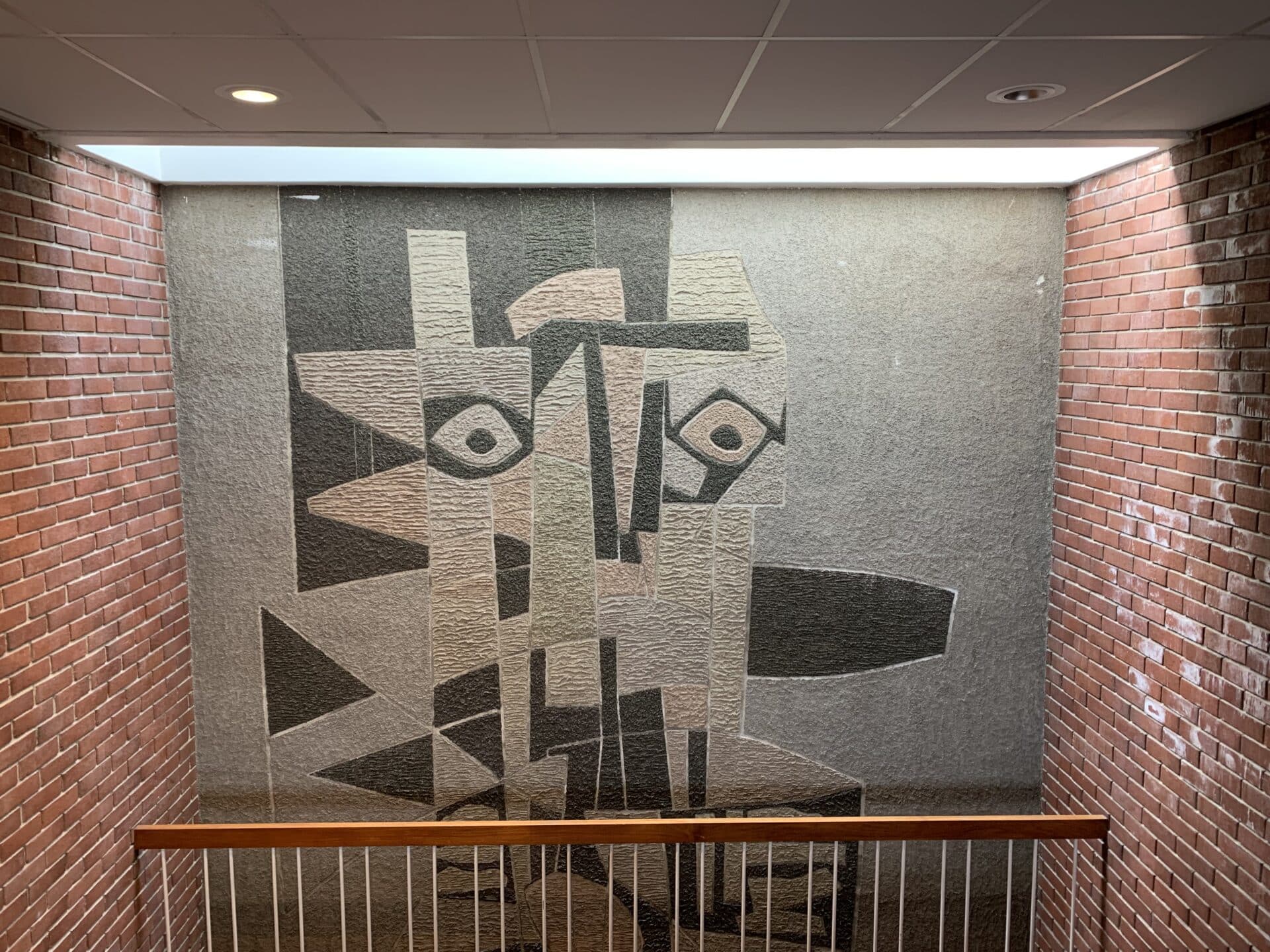 It is a serious poetry. Art keeps long hours. We have our eyes on you.

But who is watching the art? The usual mixture of civic and commercial interests, that impenetrable concoction, has determined to tear down the building (designed by architects Eyvind Retzius and Svein Bjoland). Outside, the rain continues, blue peeking through a hard gray. My naïve, idealized American notions of Norwegian support for art are being slowly eroded. As always, it’s more complicated than that.

The Bøe continues to stare at me. What meaning will it have when separated from its original context (if it even survives)? First a police station, now a youth center, imagine all the eyes that have looked back, the fingers that have traced the rough, nubbled contours of its many panels. A. brings up Richard Serra’s Tilted Arc, a massive sculpture installed in New York’s Federal Plaza in 1981 — and immediately sparking protest by those who saw it as a hulking, ugly obstruction of their space. After years of hearings, petitions, debates, administrative change, and etcetera, the site-specific work was removed. For Serra, this was tantamount to destruction, but for good measure it was then cut into pieces and sent to storage, where I believe it remains, its afterlife reduced to the dreary pages of art history textbooks.

B. tells us that Stavanger’s mayor proudly proclaimed at the unveiling of the Bøe mural, finally people are recognizing that a building isn’t finished until there’s art 1 — wishful thinking, it would now seem, or at best incomplete. B., who has been working to raise awareness of the current situation, says a certain apathy seems to surround the fate of this artwork under threat of being demolished before people’s eyes, and this leads to a discussion, over coffee in the café in Rogaland kunstsenter, which is right next to Studio 17 where I am writing these notes, of how artists aren’t always the best citizens. Actually, no, the conversation was still in the Nytorget 1 lobby, which is itself just down the street from Rogaland kunstsenter, because I was looking at the Bøe as we talked. I remember I kept thinking of the public, the city-body-politic, and how the work morphs from face to map to _____.

Now (now being then) I think of the Viking graves outside Hå gamle prestegard, where A. took me and where we met B. and his partner — well, Obrestad fyr, to be precise (I look up Obrestad to make sure I am spelling it correctly and read about the Norwegian poker phenom turned minor makeup celebrity Annette Obrestad). I think of Mariela Limerutti’s house portraits carved into the sidewalk of Pedersgata in 2008, as advance memorials, as protection. Protection, as I understand it, from forces of change in a city that, like many cities, is continually tearing down large swathes of itself. When I look the portraits up online I see that, according to a page of the Sandnes International School, the engravings were inspired by rangoli, or “geometric patterns, religious symbols and floral designs [that] are drawn on the floor of one’s home, often using chalk and colorful patterns, as a way to ward off evil spirits and welcome the good faith of gods and goddesses. The word ‘rangoli’ is derived from the Sanskrit word ‘rangavalli’ and roughly translates to ‘rows of color,” a fitting image for Diwali’s message of light conquering darkness.”

But we did have coffee, A. and B. and me (C.), though actually I had some strange concoction made of maybe oats or barley, brewed by the very nice man whose name I forget who runs the café, because I am (still) not drinking caffeine, and most self-respecting cafés do not serve decaf coffee which, who can blame them. (And “nice” isn’t correct here, either, though the man, whose name I am reminded is Christian, was very nice, but also something more compelling, more particular, than “nice” conveys.)

Limerutti’s original engravings were done without color and, according to B., “almost got forgotten.” About a year ago the collective Byverksted had them painted red with her permission; later (now), B. describes the action in an email as “an art-archaeological performance.” 2 They used a particular type of pigment from the Stone Age, A. mentions, one that is protective as well as decorative. Rows of color. Rangavalli. Protection for the protection. B. was kind enough to introduce me to Limerutti, also over email, and I wrote to say, “I'm very struck by your sidewalk carvings; they're such subtle and evocative interventions.

I’ve been thinking a lot recently about what stays and what disappears, and I’m curious to know what prompted you to make them and how they live now in your memory.” She wrote back quickly to thank me for my interest in the “lives engravings” and to say she would be back in touch when she was done with her work, “just now inside a NTF hakathon for teenagers.” I haven’t heard from her again. I imagine her swallowed whole inside an NFT, which actually in my imagination is something from the original Pac-Man, gobbling row after row of colored dots (rows of color, I feel compelled to emphasize) in its strange little eat-or-be-eaten universe. And now (later, at home), I am thinking of lying on the black cushions, the mad chicken, talking to me, to the world, to itself, mostly I think to itself while the vampire-rabbit leers above us.

One also could think of Bøe’s carving like a rangolis, its geometric shapes and slivers of cream, rose, pewter, moss… the moss leading me back to Hå gamle, to the cow pastures where tall grasses give way to a beach of rounded stones, and in between the Iron Age graves made of these same rocks, marbled with lichens and bird shit, the gorgeous, enduring patterns shot through with small white, purple, and yellow flowers. Beyond all this, the ocean’s expanse. It seems inevitable that B. is a member of Byverksted, the collective or network (rows of color) that is also responsible for bringing Limerutti to Stavanger in the first place. It is now October 24, 2022, as I am making the final edits to this piece: it is, in other words, the first night of Diwali. Patterns upon patterns. The things that disappear and the things that endure. Humans as tiny mortal gods who giveth and taketh away.

Later, M. gives me a booklet from Hå gamle that states, “The tools and weapons used in the early Stone Age were made mainly of wood, bone, horn, animal sinews and various plant fibres, all of which have long since disintegrated and turned to soil. Only the flint and stone objects remain, and in rare cases, remains of amber ornaments and bone tools. A ‘Stone Age’ as such never actually existed.” The booklet, Traces of Man and Nature at Hå in the Stone Age, is itself a fascinating trace, an art-archeological fragment of a vast body of knowledge about which I know so little. Knowledge which is itself, as Traces acknowledges, predicated on “a good deal of imagination combined with learned guesswork.” In life as in art, reconstruction is a dicey business.

I walk up and down Pedersgata taking pictures of Limerutti’s carvings, which quietly accomplish and allow for much more than most public art efforts. (Now I wonder what will happen when a sidewalk needs to be torn up to fix a pipe or this or that, what protection the protection will offer itself.) Mostly I try to keep my shadow and feet out of the pictures. A. tells me the red pigment is believed by archeologists to be iron oxide magnetite, found naturally in bogs and rock crevices — it can be mixed with other things, notably blood and fat.

This mixing for me is what art does — what it’s good for. Mixing with other things, notably blood and fat, to form connections in ourselves, to our past, to the not-yet, to each other, to the world.

The line “art keeps long hours” comes from a short and sentimental Donald Justice poem, “On a Picture by Birchfield,” which I read as a young person and which has stayed with me all these years, proving its point:

Already your agony has outlasted ours.

The squall has intensified. If it were a person, you’d say it was angry, mean. I think of H. describing a “landscape of the imagination,” one that seems alien but isn’t. I think of the flowers dotting the grave sculptures and mounds, and the eternal present of art (except, I suppose, when its building is destroyed? What then?). The flowers at Obrestad do indeed writhe. But I cannot agree that they do so in agony.

*
A. is Astrid Helen Windingstad
B. is Benjamin Hickethier
H. is Hans Edward Hammonds
M. is Marte Jølbo