Herman Mbamba is a Haugesund-based artist whose practice predominantly revolves around drawing and painting. He often finds inspiration in the absurd and its role or function in forming meaning. Below, Mbamba elaborates on his engagement with the materials surface, movement, colour, and form, and how these elements come together in his figurative works to represent narrative notions. 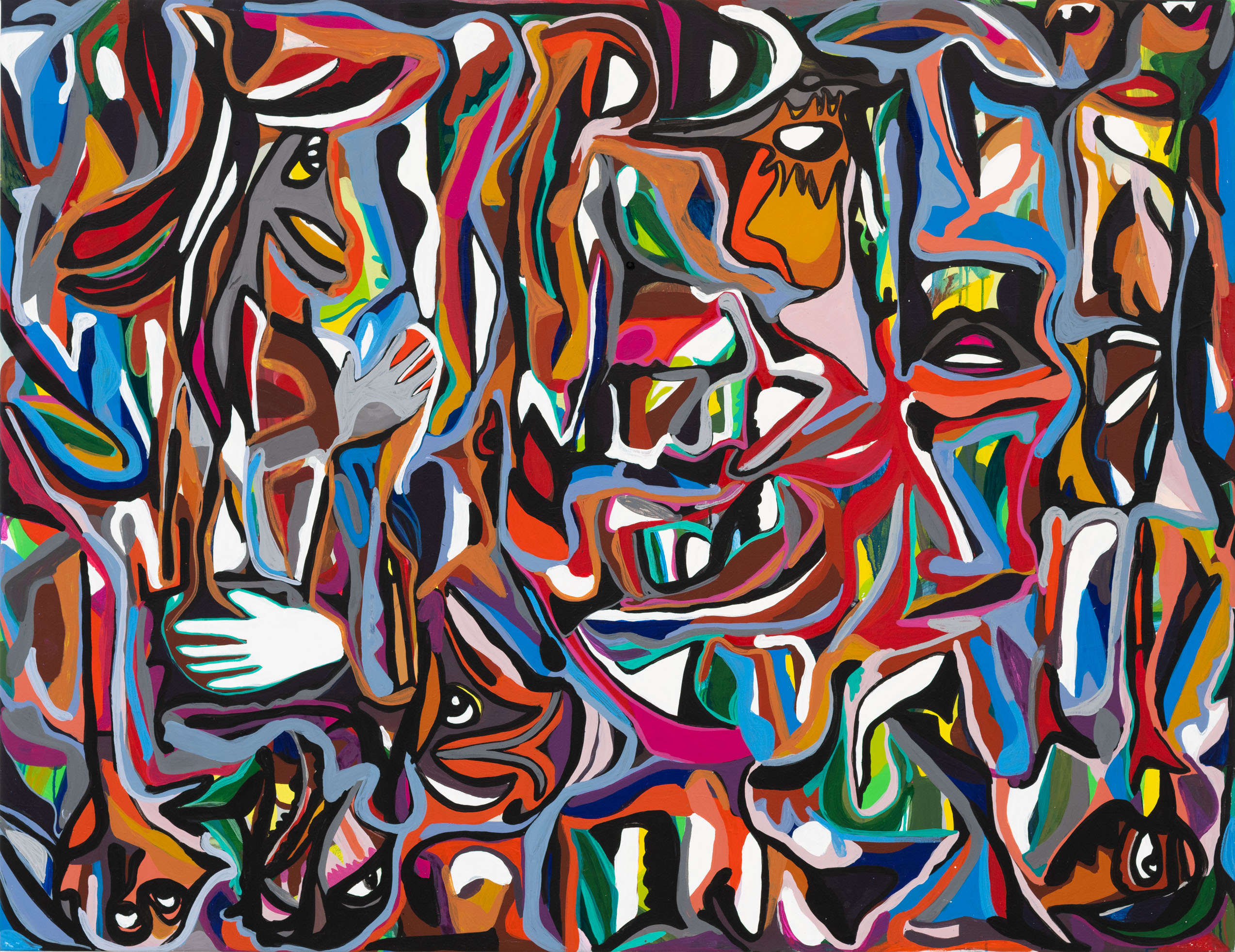 Astrid Helen Windingstad: Tell us a little about your background. You live and work in Haugesund, and have a Master’s degree from the Academy of Fine Arts in Oslo. But you were born in Namibia where you also studied. What brought you to this small city at the west cost of Norway?

Herman Mbamba: I came to Norway in 2003 to study at the Academy of Fine Arts in Oslo. Before that, I lived in Namibia, a huge country geographically with a small population. Prior to moving to Norway, I studied at the John Muafangejo Art Centre in Namibia. It was more of an informal study period, during which I mastered the technique of graphic cardboard printmaking – a technique quite unique within Namibia. I came to know about the academy in Oslo through personal interactions during an art residency in South Africa. At the time I knew very little about Norway. I applied to the academy in Oslo anyway. And then in 2003 I arrived to study for the next five years. After I finished my studies, I decided to move to Haugesund as a result of family, and have been living here ever since.

AHW: How did you arrive at the arts? Have you always engaged in drawing and painting or is this something that you came to do later in life? What inspires you to make art?

HM: I do not recall any artists around me as I grew up in Namibia with my immediate and extended family. That said, I always had a keen interest in all things creative. The question of being a professional artist, I suppose, came much later. I mainly drew, as this was the most cost efficient for me. I came to hear about the John Muafangejo Art Centre (JMAC), through bizarre circumstances, and there I was introduced to the formal basics of drawing before I advanced to printmaking. By then, I still had no interest in painting. The environment of the school was focused on printmaking, which at the time was more appealing for the majority of black artists. There was a solid market for this art form, thus many of us opted for it. During this period, much of the subject matter often pointed towards socio-political and cultural themes.

With regard to what inspires me within the context of art making. Well for me, there is no direct answer to this. But I can say I’m more fascinated by the absurd and its role or function in forming meaning. 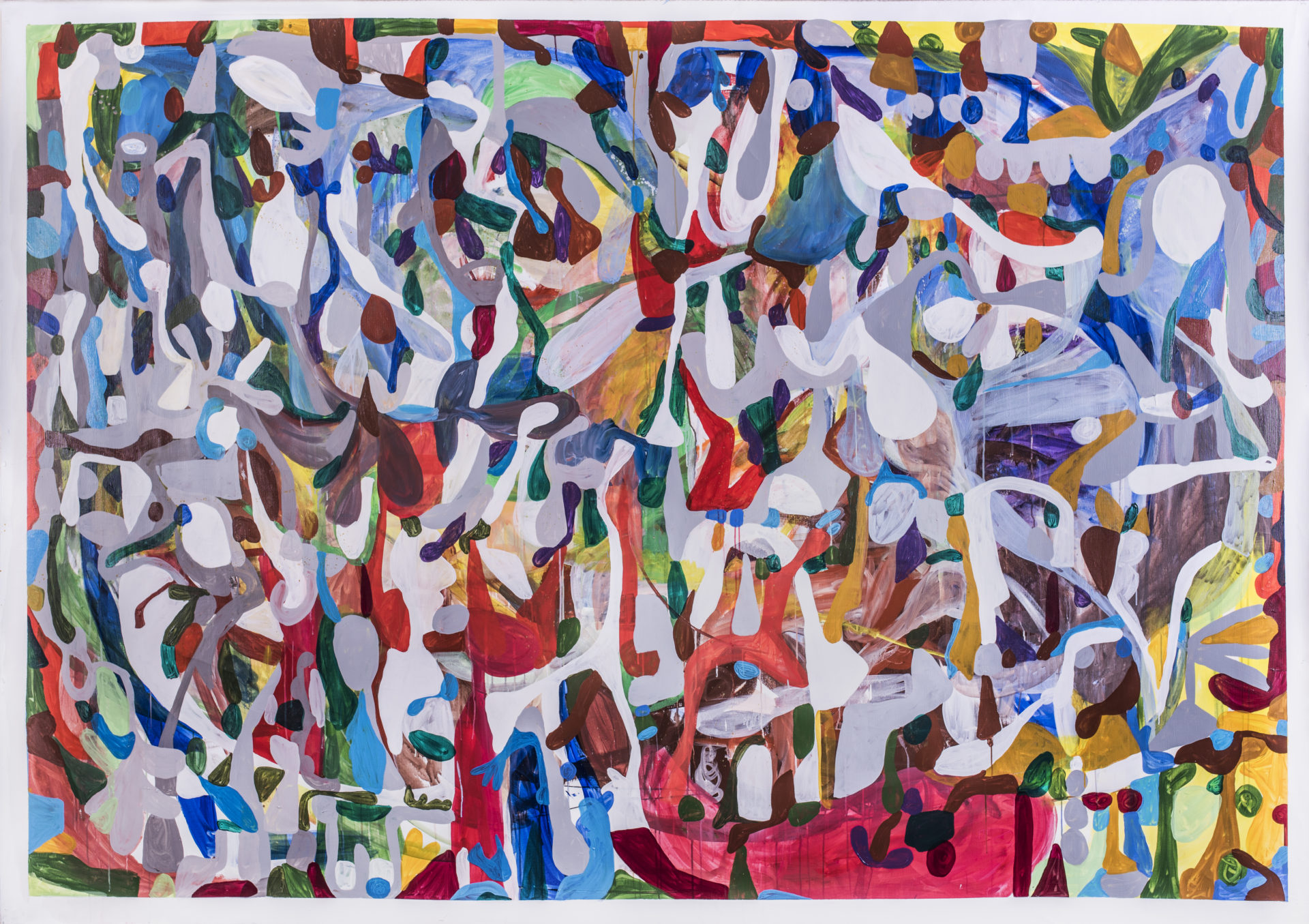 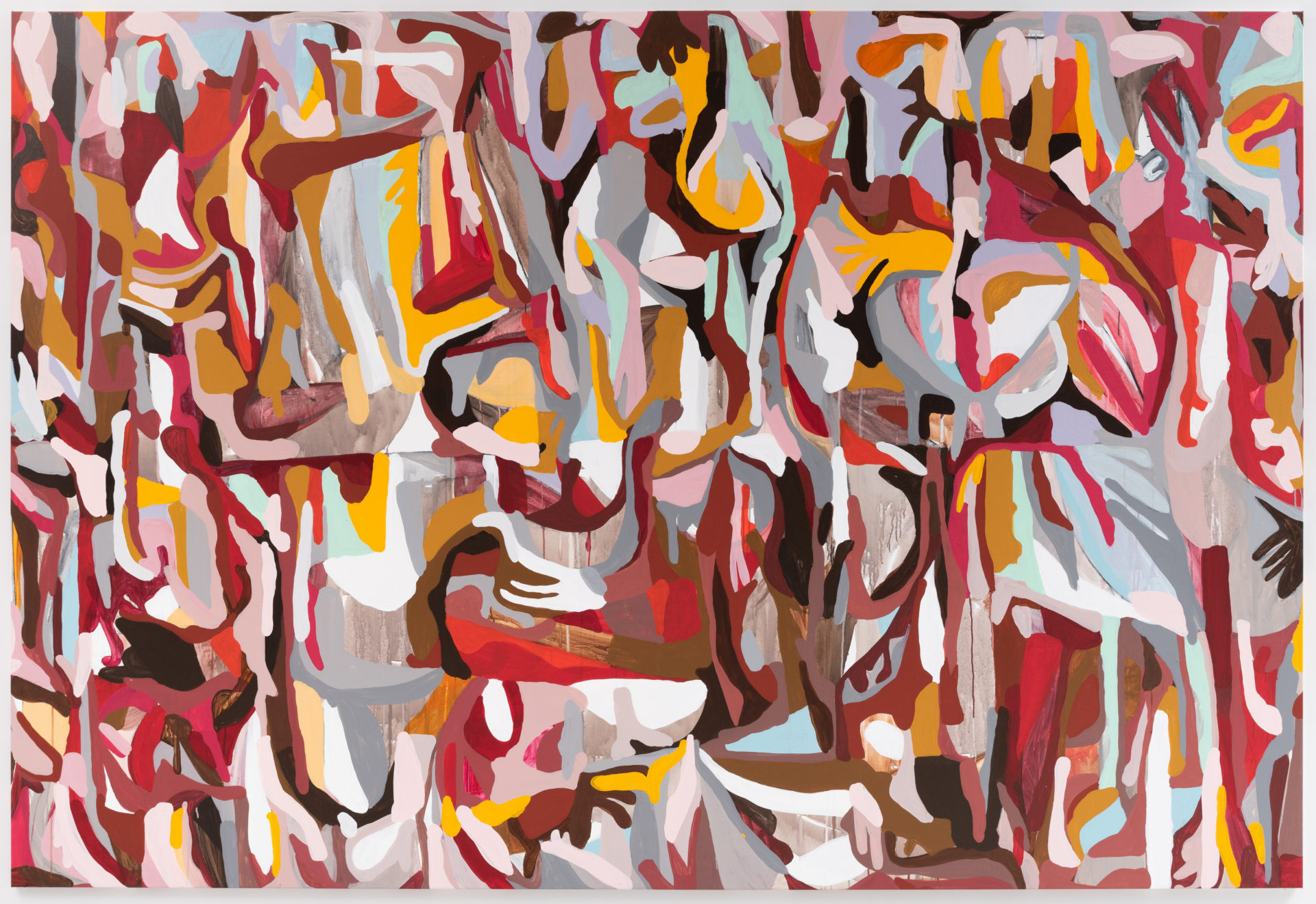 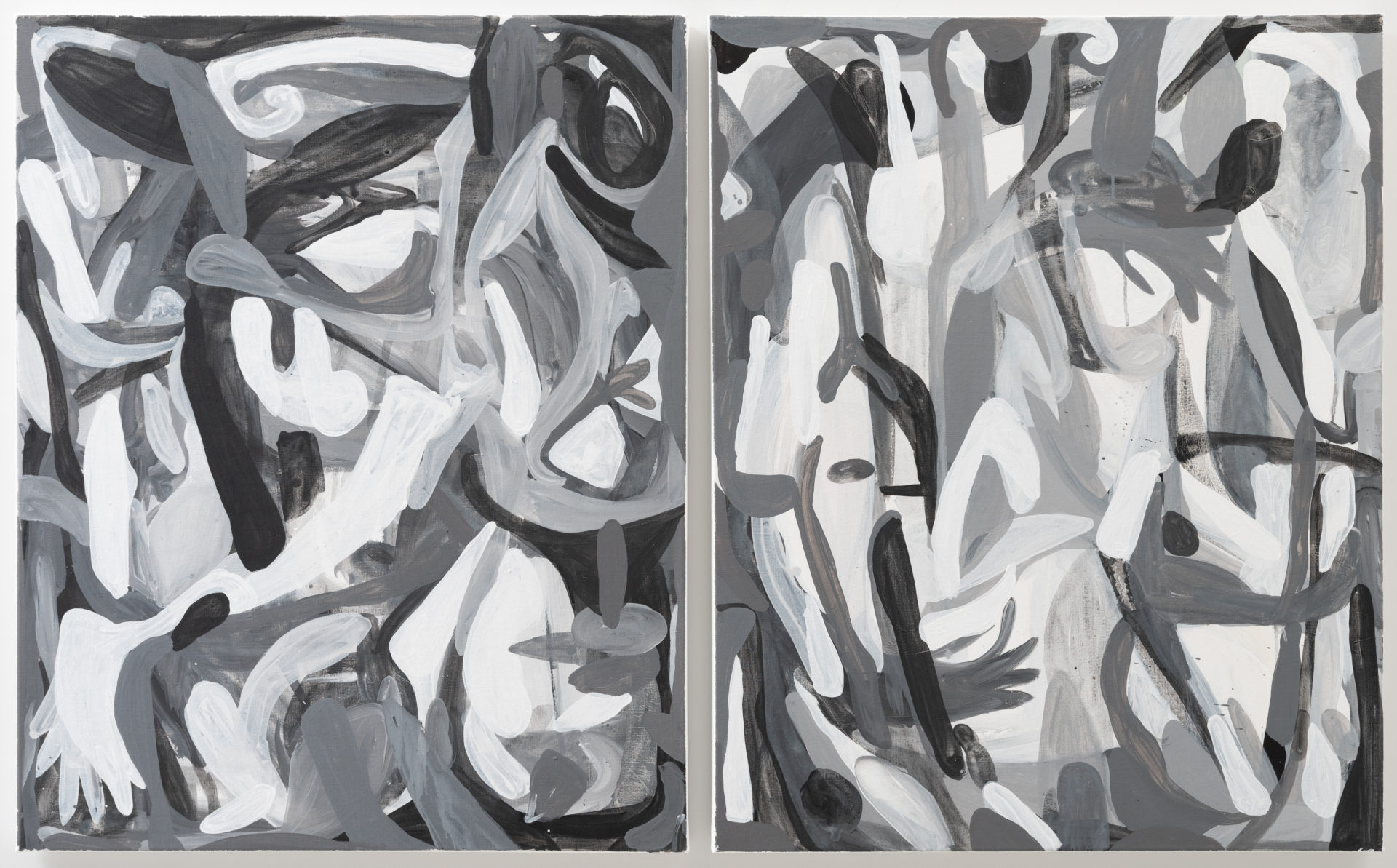 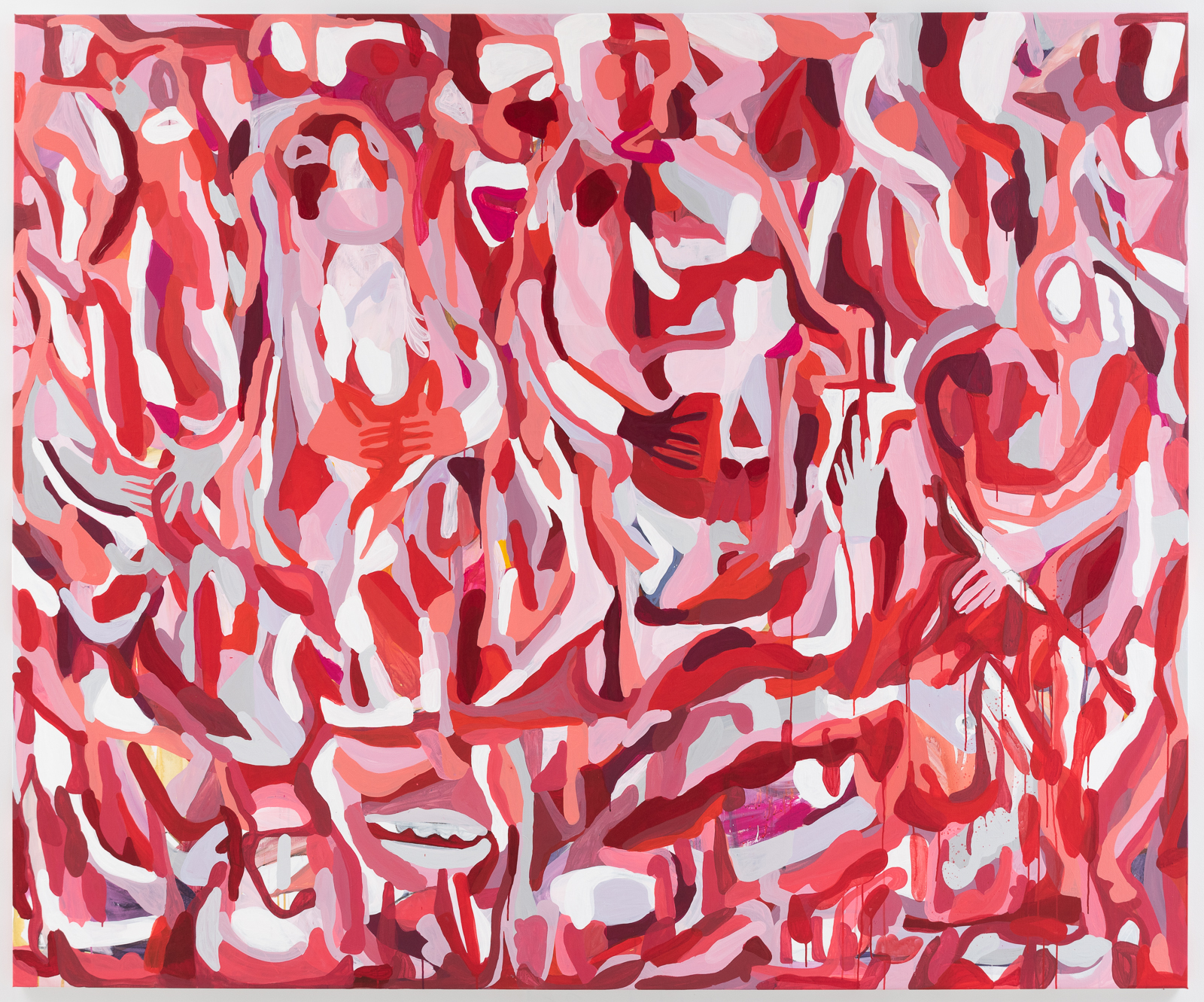 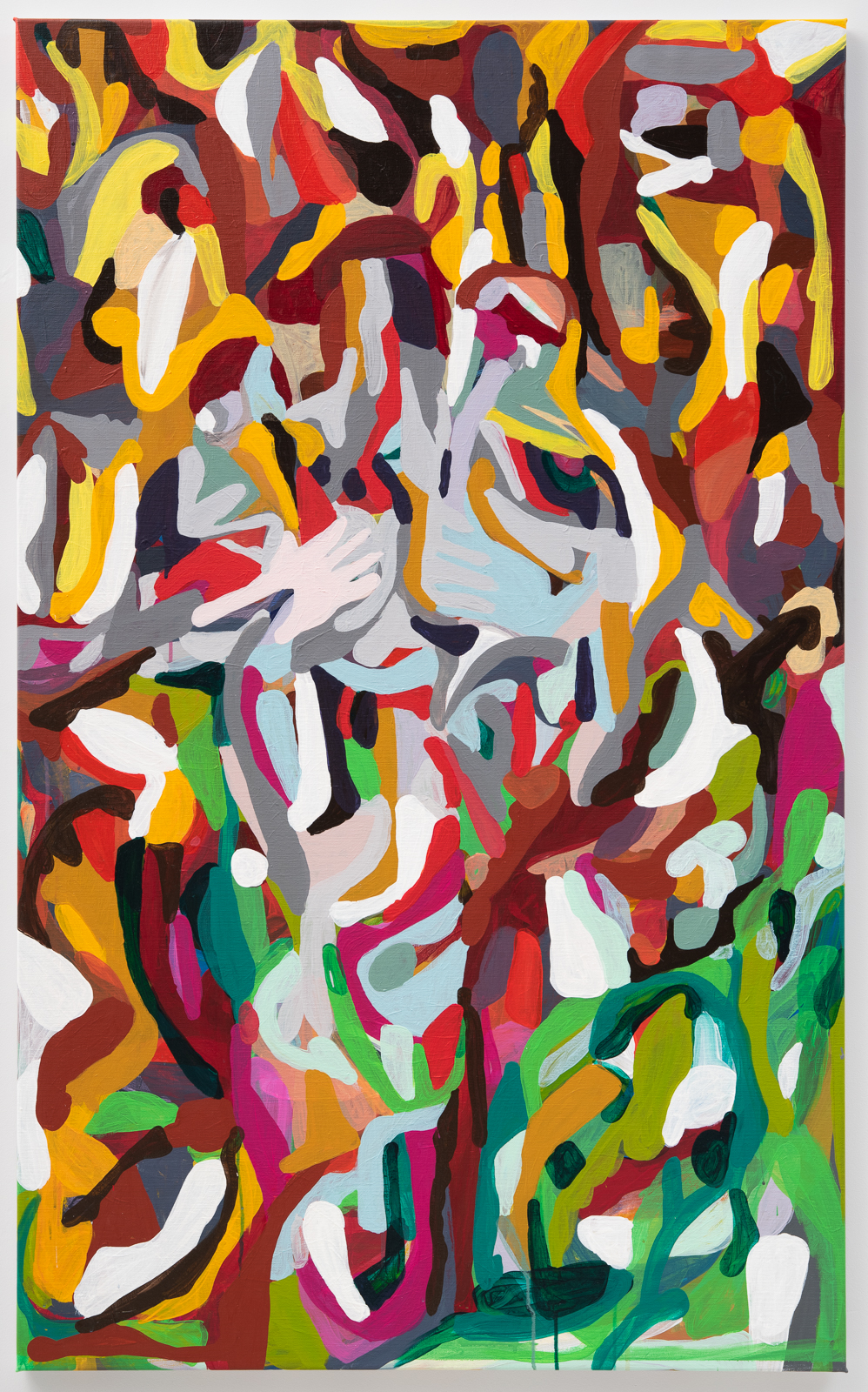 AHW: In your art, you often choose painting and drawing as your medium. You move between the figurative and the abstract, and I perceive, especially your paintings, as very intuitive. You don’t use sketches, and the canvas or paper often seems to have been given a rather rough treatment. At the same time, many of the works have the same “rhythm” that gives them a specific character. What is your working process?

HM: Throughout the last few years, both painting and drawing have always been present within my practice. It’s only recently that I started to closely focus on both simultaneously.

You mentioned the intuitive and the material qualities (rough, painterly gestures) with especially with regard to the paintings. It’s no coincidence. Of course the canvas material is different and is filled with so much history, in contrast to the fragility of paper. Yes, it is partly true that I often approach the canvas surface by way of intense physical engagement. At times the blank canvas installs some form of fear as it awaits my interaction. In doing so, I rather consider the surface on the blank canvas to be an invitation to first be physically involved and then to be mentally present. And yes, there is something about rhythm. In my artwork, the idea of rhythm is closely tied to movement. Therefore the flamboyant presence of vivid colours is apparent within my work, and is precisely connected with rhythm and movement.

AHW: In what way do you approach drawing and painting differently? Do you have an idea upfront whether or not it is going to be figurative or abstract, and what colors you are going to use?

HM: I already spoke a little bit about the difference between drawing and painting. Starting with the differences material surfaces subsequently leads towards the end results of each artwork.

In reference to the recent body of work where the figurative expression is more emphasized, the emphasis is clearly visible in both mediums; drawing and painting. I clearly recall at the beginning of last year, after many years of solely focusing on painting, there was a need to rejuvenate an old form of language. And thereby I decided to return to drawing again for a while. However I desperately search for a space to include painting into my newly discovered paradigm.  So the medium of drawing presented a space where I could think about painting differently. For me, it’s important to establish some form of symbiosis in the paintings and drawings. I achieve this through way that I make use of either the brush or the marker – the artwork emerging in the interaction between the surface and my presence.

With regard to my colour usage and the choice preferences, in certain circumstances I would envisage a pallet of colours for a particular narration.

During the working process I would constantly shift between a wide variety of colours. I challenged myself to work with a colour palette untraditional to me. This functioned well in some bodies of work. However for other, it seems that certain colours are significant and archetypal of my form of expression, be it painting or drawing. 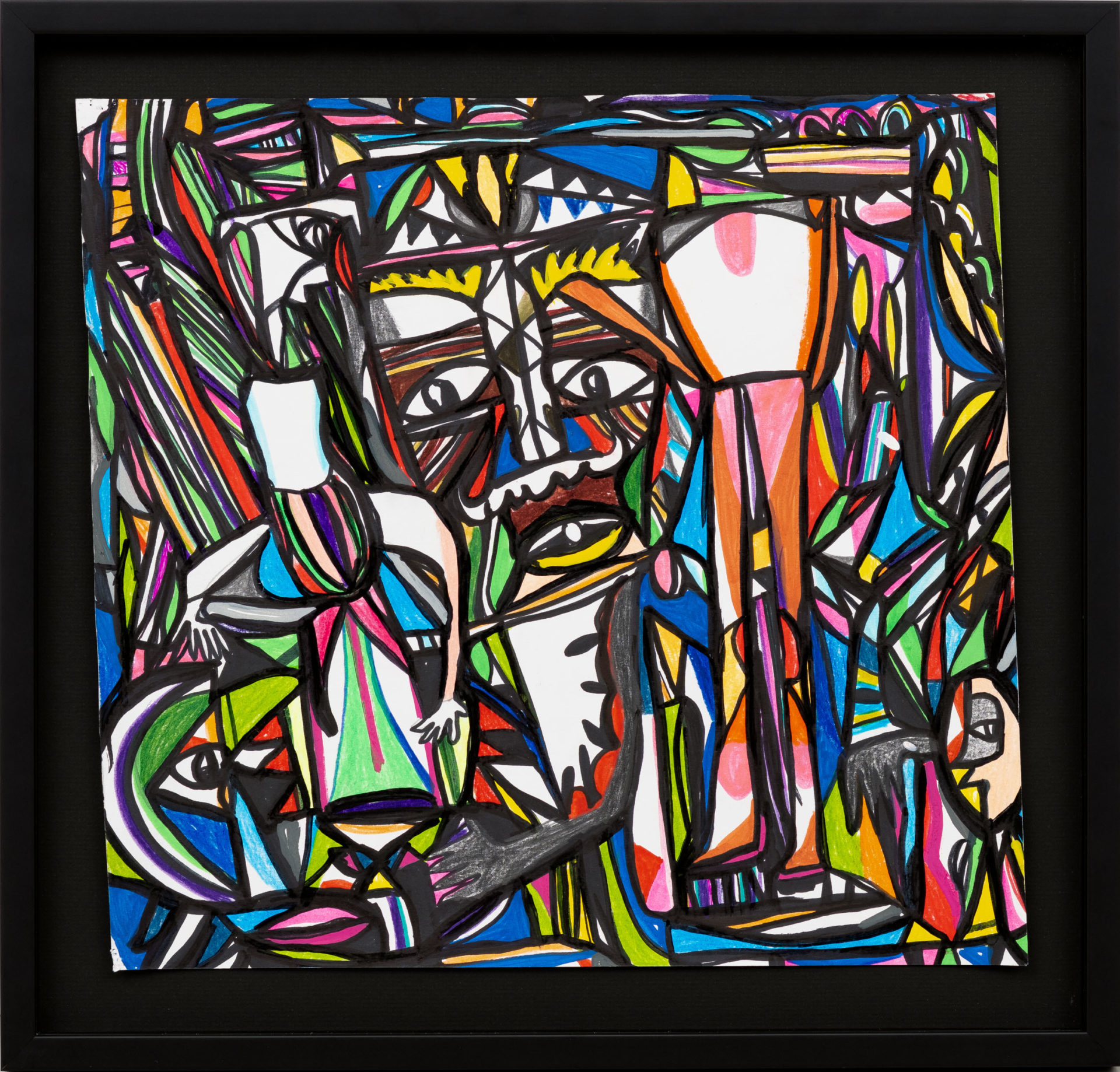 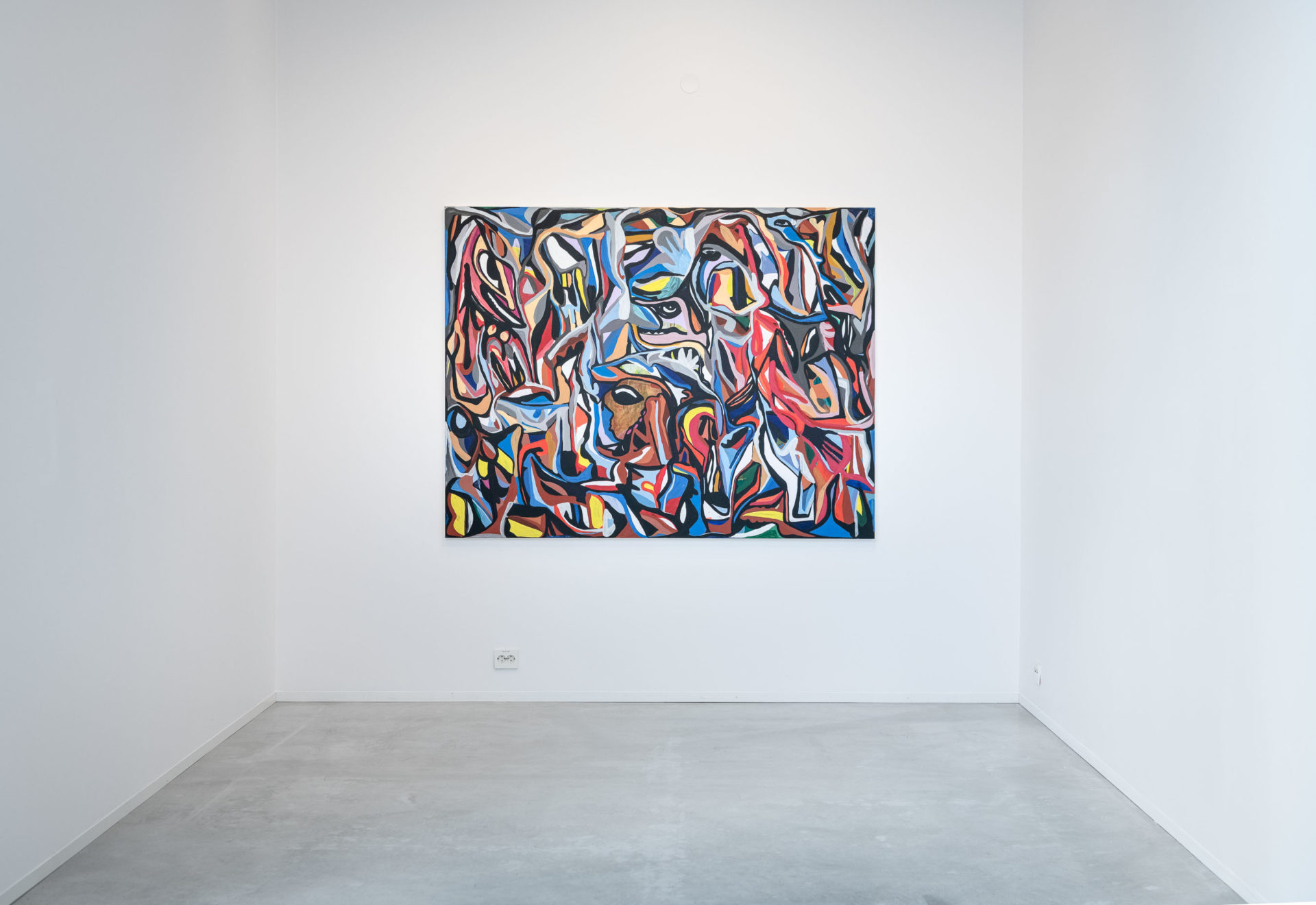 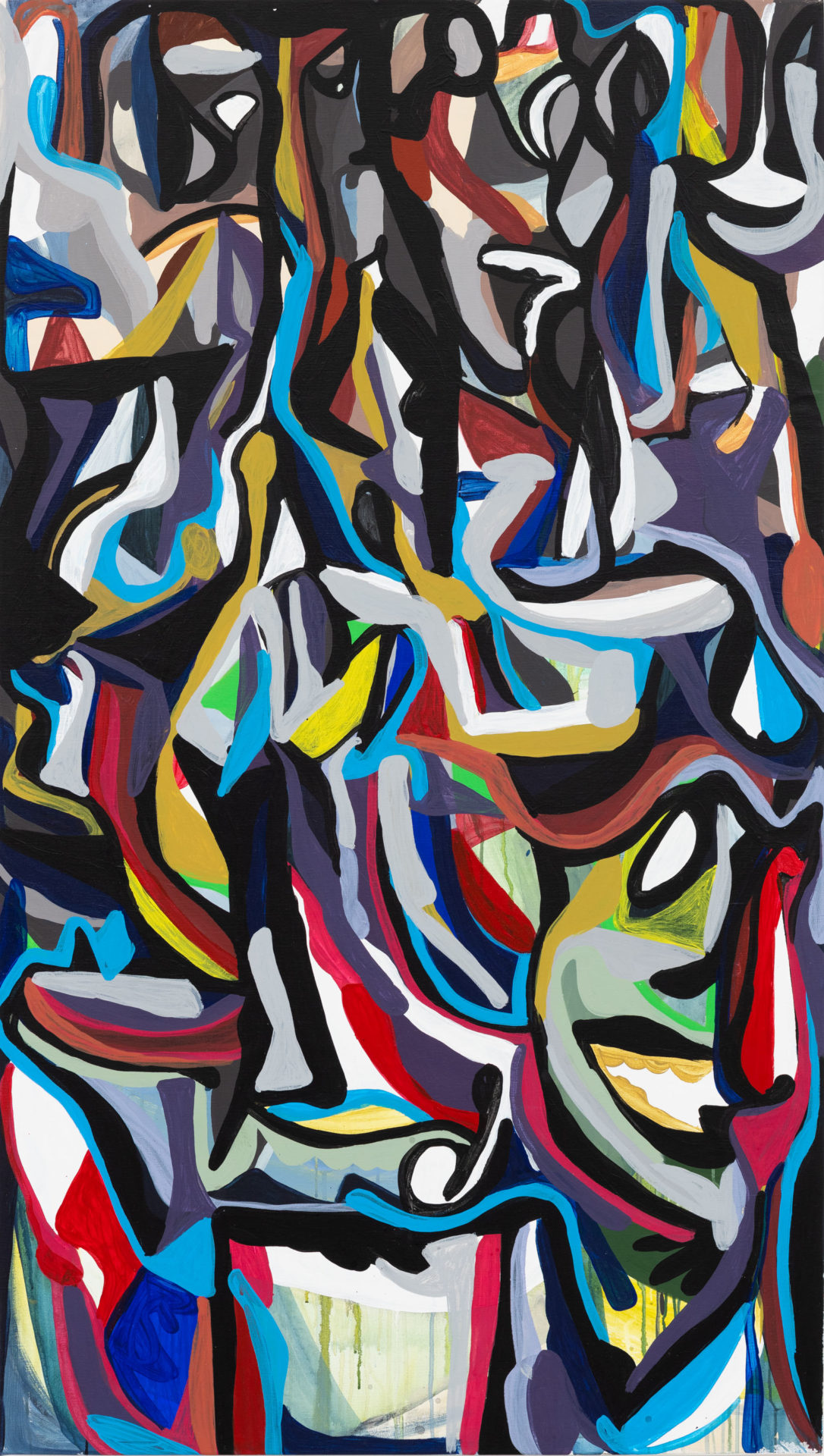 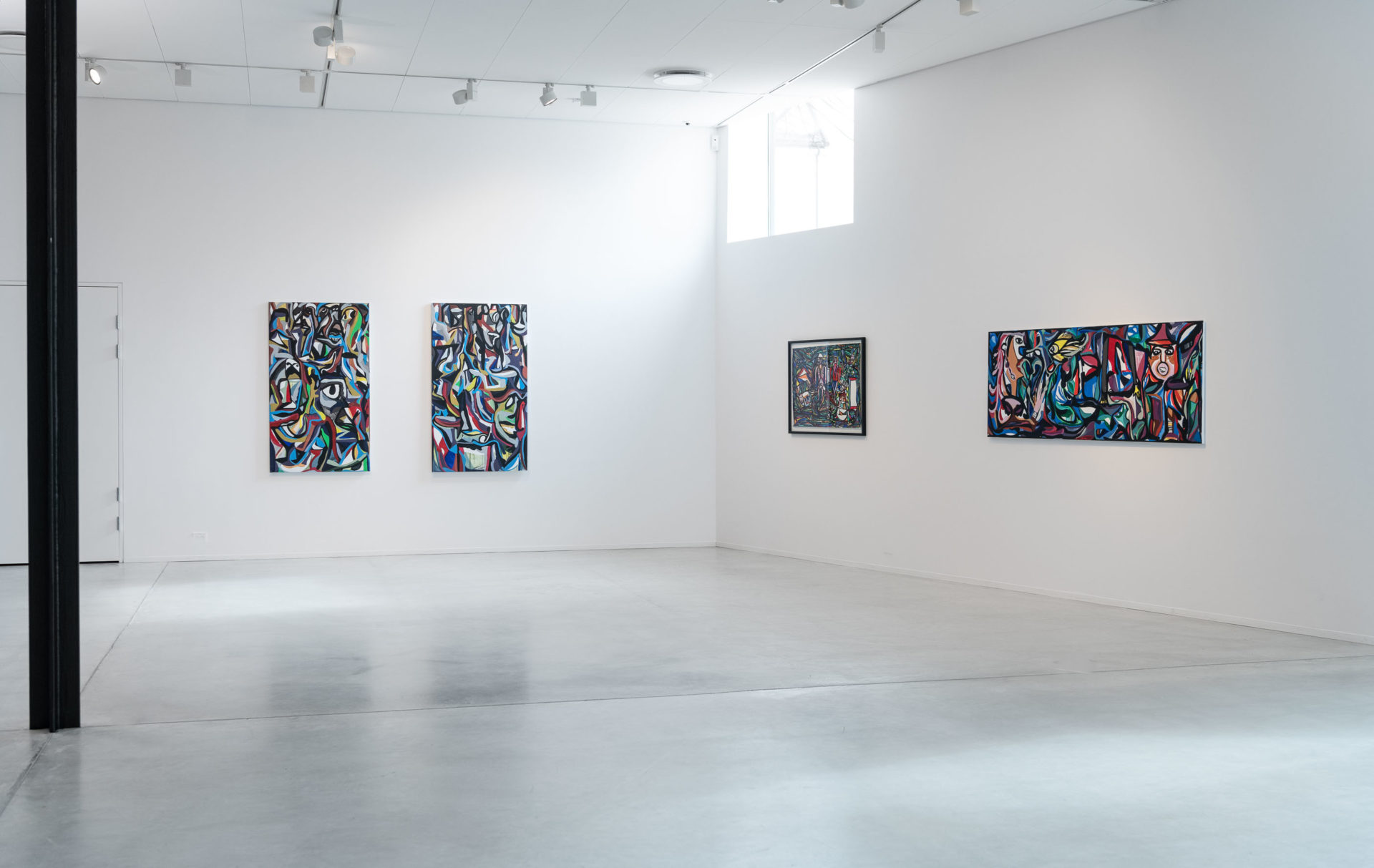 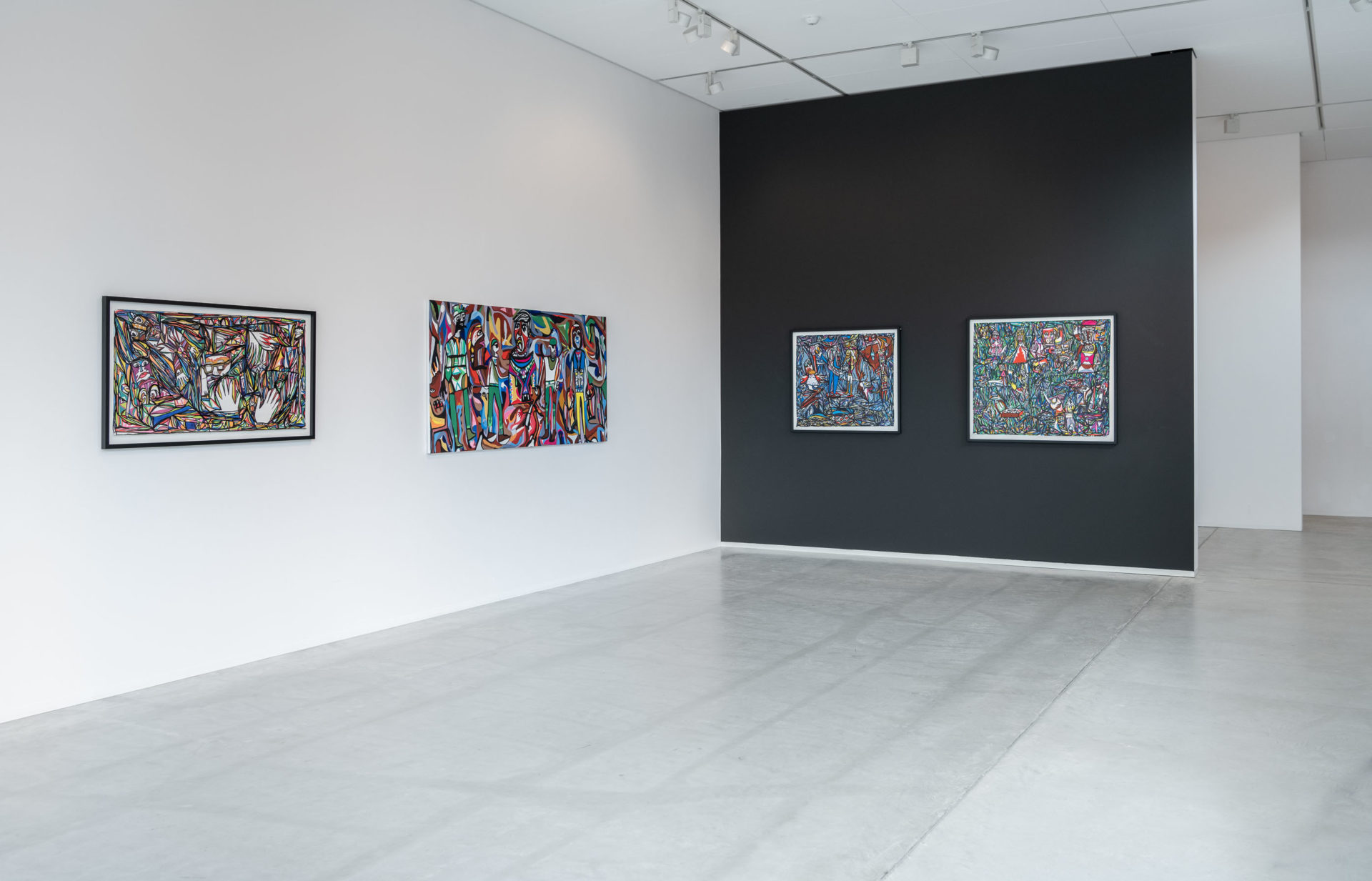 AHW: In your solo exhibition “Om streken tillater, er former med” at BGE Contemporary, both your paintings and drawings insist on being seen with their intense colors and diverse color combinations. Many of the works are also quite figurative with people, especially eyes and hands that amplify the intensity and strongly demand attention. Do you recognize your works in this description?

HB: Yes for sure, without a doubt. In retrospect, for many years I focused primarily on the medium of painting. As a result, much of my artistic expression leaned heavily towards the non- representative. However just recently, (in less than two years), I again returned too the medium of drawing, and simultaneously the re-introduction of the figure became more apparent.

And therefore in relation to this exhibition, the presence of figurative forms is more dominantly represented within the drawings. You particularly mention the presence of eyes and hands. Yes of course, those features are showcased in various gestures in many subtle ways, and represent narrative notions. So in essence, the presence of the figurative elements broadly amplifies and demands a strong presence as you mentioned.

AHW: I find it interesting that you mention narrative notions. Do you mean that the figurative works may also have a specific narrative connected to them? Can you give us an example?

HM: Yes it can be so. In reference to works within the exhibition, I think of the painting titled “Shopping in Times” where the forms clearly resonate with the title. I would argue that its probably one of the paintings in which the figurative forms are most dominantly present across the whole surface.

The array of figurative elements engaged in various bodily gestures if of great significance. Most noticeable is the interaction between the various forms, with each form symbolically representing a situation. And this is in addition to each figurative character being infused with aesthetics that are relationally symbolically. It is the interplay between them that forms a basis for the story. I consider much of my practice to be apolitical, with a very few subtle political comments. Thus the painting “Shopping in Times” articulates a certain personal position through multiple layers.

AHW: The lines in your work is quite chaotic, but there is harmony in the shapes. Is there anything in this description that is implied by the title “Om streken tillater, er former med”( loosely translated: “If the line allows it, the forms will follow”) What was your intention with this title?

HM: Again for me, it’s important to distinguish the different mediums, though the title itself suggests the whole body of work. With regard to the drawings, a much more controlled use of the line is present. The controlled movement of the line ultimately dictates a shape or form. However I found that the paintings functioned differently due to their scale. Yet still the black contour line’s presence similarly demarcates the different forms and shapes. The exhibition’s title “Om streken tillater, er former med” literally emphasizes a working process with defined results.

AHW: What are you working on right now?

HM: At the current moment, I’m working on several preliminary sketches for a mural commission. It’s been quite challenging in many aspects. To begin with, it requires me to operate within limitations when it comes to narrative form.

There are other equally challenging limitations during this process, especially given that I make use of the cut-and-paste method of working. Subsequently, I reminisce about printmaking again after all these years. In essence much of my practice has always been closely knitted, thus allowing for a gradual process of development.

Herman Mbamba has participated in several group exhibitions, including We don’t need another hero (2018), the 10th Berlin Biennale curated by Gabi Ngcobo; the worldwide travelling exhibition Lumières d’Afriques (2016) where he represented Namibia; Chanting all glamouring, chirping(Munch Museet, Oslo, 2016); and Africa? Una Nuova Storia (Complesso Del Vittoriano, Rome, 2009). He is a founding member of the artist collective El Parche, who has exhibited work on La Otra Biennale in Bogotá, Columbia (2013), Hypocrisy: The Site Specificity of Morality (Museum He has taken part in several residencies and workshop programmes, including the BAT Centre residency in Durban, Caversham International Artists and Writers Centre in Kwazulu Natal (2002), Tulipamwe International Art Workshop(2002 – 2003) and the Thapong International Art Workshop (2002).