Swedish artist Cecilia Hultman recently presented an exhibition of small graphite drawings and found sculptures at Studio 17 in Stavanger. The title of the exhibition, HOLD, prompted us to review the artwork through the lens of language. Below is a reading of the exhibition via the various definitions of the word HOLD. 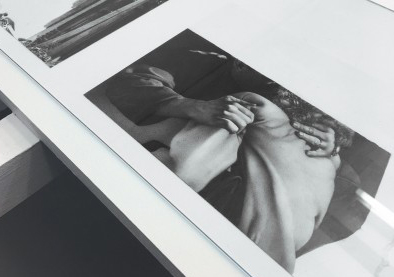 Too often we take words for granted. It’s when asked to provide a definition that we become aware of the multiple meanings a single word may carry – the shifting sands of language. In a single stroke, Swedish artist Cecilia Hultman called into question the word HOLD in a recent exhibition bearing the same title at Studio 17. Did she mean HOLD as in to hold onto something, or a hold as in a space that contains objects, or a hold as in a handhold or foothold, something to grip onto, to hold a hand or hold your breath? The exhibition consisted primarily of miniature graphite drawings rendered in photorealistic detail that characterize Hultman’s work. For such physically small artworks (and gallery space), the exhibition incited very large questions. A walkthrough of the exhibition and discussion with the artist led me to view the artwork through a variety of different perspectives based on the various definitions and etymologies of the word HOLD.

HOLD:  verb – grasp, carry, or support with one’s arms or hands; keep or sustain in a specified position; embrace (someone); be able to bear (the weight of a person or thing); continue to follow (a particular course); Archaic: keep going in a particular direction.

The first image that comes to mind is not one of people, but of Hultman’s small drawing of a forest. A trunk has fallen over and is propped up by the limbs of the surrounding trees. While the rest of the forest is drawn in exquisite detail, the fallen (presumably dead) tree is left blank, a simple outline of negative space. The presence of absence.

These feelings of presence, absence, and support pervade the entire exhibition through its physical display. Rather than hung on the wall, the drawings are presented horizontally on a meandering grid-like structure of white planks suspended from the ceiling. The miniature size of the drawings and the choice of display further force a feeling of intimacy and interaction with the works, and Hultman confirmed that this was her intent. It also allows her a greater sense of closeness with her artwork and the content/emotions that she is trying to express. The presentation could seem gimmicky, but it’s subtle enough and successfully creates the effect of a single artwork rather than separate drawings and found sculptures. Through the arrangement, the viewer is encouraged to connect the dots and find commonalities between the seemingly disparate images and objects.

My mind jumps from the forest drawing to another small drawing of two figures embracing, clutching each other. Again, Hultman’s skill and attention to detail drive the image home – the lines on the knuckles of the hand as it squeezes, the wrinkles in the shoulder of the cloth jacket. At first glance, this drawing and the above definition seem to be a straightforward marriage of concept and illustration. But upon closer inspection, I question if the figures are holding each other in a mutually supportive embrace, or more menacingly forcing one another to stay, to bear the other’s weight. I wonder if it’s the passionate embrace of new love, or the struggle and refusal to let go. Which leads me to consider additional definitions:

HOLD: verb – keep or detain (someone); keep possession of (something), typically in the face of a challenge or attack; keep (someone’s interest or attention).

noun: a particular way of grasping or restraining someone, especially an opponent in wrestling.

noun: a way of influencing someone; a degree of power or control.

When viewed through an alternative reading of HOLD, a sense of desperation becomes evident throughout the exhibition – an attempt to hold onto something or someone under duress. Clinging. The use of force. An attempt to retreat or to hold close to you. With this in mind, other artworks stand out. I notice a small drawing of a person curled in the fetal position, nestled in the crevice of a large tree. The face of the figure is hidden under a superimposed image of another figure holding a black curtain. A person hiding, taking refuge. A face obscured. Vulnerability and aggression, power and fragility.  Following this thought to its end, I understand that with detainment and limitation comes a sense of time, of waiting.

HOLD: verb – keep for someone; prevent from going ahead or occurring; Archaic: restrain oneself.

To wait. To reserve something or someone for another. To restrain oneself from action. Hold a place in line, hold your tongue, please hold while I see if he’s available, hold yourself apart. From this angle, Hultman’s installation takes on a sense of stillness and interminable waiting. There is also anxiety present and an element of the sacrificial. But I wonder what is being prevented, and to what effect? In the entrance to the gallery space, a video on the floor shows a ticking clock made of green leaves. I connect this single video in the exhibition with other strong drawings of nature – the fallen trees, craters, a scene of an ocean with a circle of negative space in the middle. I have a feeling of angst, of time running out while waiting for some action to be taken. It’s here that the relationships between the human and the environment converge. Images of nature become personified and full of emotion, while depictions of human interaction are consumed by the natural realm. Upon further contemplation, the picture of the ocean with its waves and tides begins to feel very similar to the aforementioned drawing of the man and woman embracing – the push and pull of human emotions. 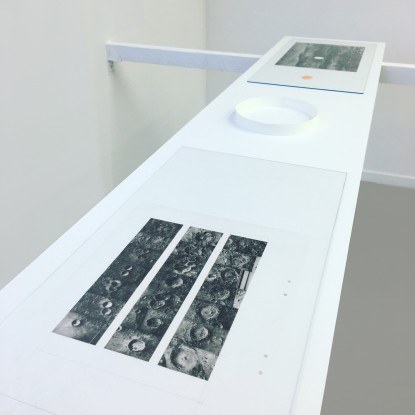 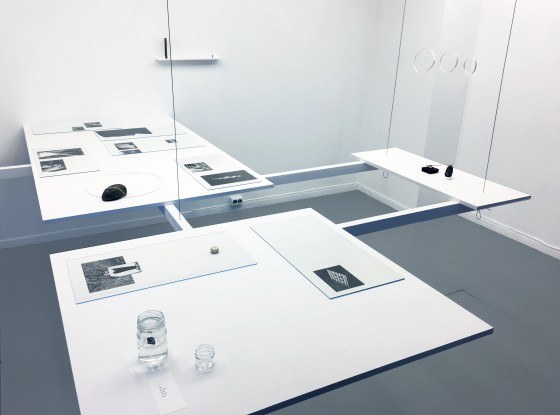 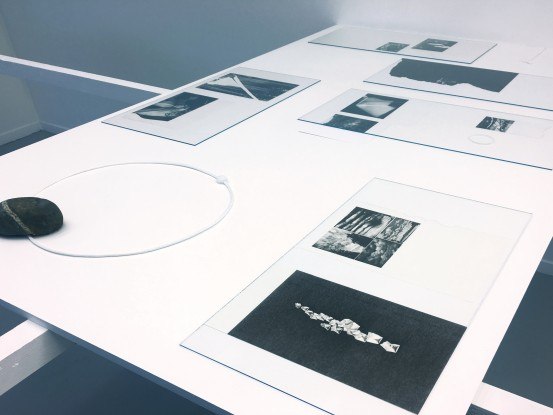 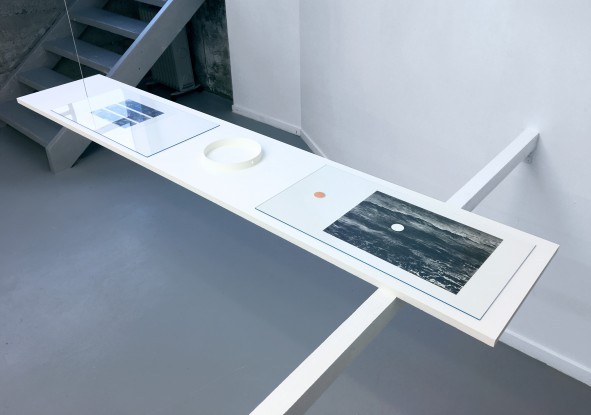 HOLD: noun – a large space in the lower part of a ship or aircraft in which cargo is stowed.

An entirely different definition occurs to me – a hold as in a space that is able to contain, encompass, encircle. A hold (noun) is also a thing that holds (verb). With this in mind, my eyes notice for the first time the numerous circles and enclosures in the exhibition – echoes of this shape reverberate around the room. A deliberate circle of negative space in a drawing of the ocean, a peach-colored circle next to the drawing as if it could plug the hole, an uneven circle of string, stone, and cotton, texts typed and displayed in rings and arranged in circles on a sheet of paper, often imperfect, deliberately off center or crooked. There are also small sculptures and arrangements of objects punctuating the exhibition that I had previously overlooked while so intently studying the drawings – wads of cotton, string, pencil nubs, small pieces of wood, stones and glass containers holding water and typed words.

This definition helps solidify the exhibition for me: A sparse exhibition that contains so much. During my conversation with the artist, we discussed the fragility of life, the serenity of the environment and fears for its demise, unraveling personal relationships and new loves, the fine line between life and death, existing and ceasing to be, and of course the investigation into language itself through repetition, wordplay and arrangement. After speaking for over an hour, Hultman said “So it’s about all of that – about life.” And as trite as that may sound, in this instance it holds true. HOLD is one of those rare exhibitions that is about everything, while still being specific enough to avoid vagueness. The broad, universal concepts contained in the exhibition come together and hang on a single word.

The various definitions of HOLD are numerous, and I could go on and on: That argument doesn’t hold water. To hold merit. To have and to hold. To hold your liquor. When viewed through the veiled layers of language, the associations possible within Hultman’s exhibition seems endless. But one final definition strikes me as I leave the exhibition, perhaps the most important: to hold on.

HOLD: noun – an act or manner of grasping something; a grip; a place where one can grip with one’s hands or feet while climbing.

There’s one last tiny, incredibly detailed graphite drawing that pulls my attention. It’s an image of a rock climber clinging to an impossibly sheer cliff. It’s a simultaneous depiction of strength, skill and great risk. In a different section of the room, small sculptures of squeezed clay are hung under a series of texts on paper, emulating both the space between the fingers of a closed fist and the hand and footholds of a rock climbing gym. And finally, a single long, withered blade of grass hanging by one transparent pin, described by the artist as “a singular raindrop or a singular tear.” Though a sense of clinging, perhaps even desperation, pervades the exhibition, these last artworks and definition suggest a lifeline, a clinging to hope.

I sent a draft of my initial reading of the exhibition to Hultman. She replied with a small note that she had made for herself during the creation of the exhibition that succinctly sums up many of the ideas encompassed by the artwork:

HOLD
on
off
of
out
over
up
THE
LIFE
LINE